What Is Septuagesima? (And Why It’s No Longer in the Current Calendar)

A lady should never reveal her age, but for the sake of honest writing I admit I was born in the late 1960s, which means my conscious memory of Mass was in the vernacular. I don’t remember a transition from the Mass in the Extraordinary Form of the Roman Rite in Latin to the Mass in the Ordinary Form in English. The 1969 Liturgical Calendar reform also would have been implemented before the time I was aware of liturgical seasons and feast days. Basically, I am a child of the post-Vatican II Church.

When I would read books about the Liturgical Year that were written before Vatican II, I would notice a few minor differences compared to the current Roman calendar that I would have to sort out, like changed dates for feast days (i.e., St. Thomas the Apostle moved from December 21 to July 3), different names of seasons (i.e., Ordinary Time instead of “Time after Epiphany” and “Time after Pentecost”), and ranks and categories of feast days (i.e., Solemnity, Feast, Memorial instead of First Class, Double Class, etc.). These were not difficult or too different to understand, and I could easily refer one liturgical calendar to another without a problem.

But there were a few references to certain liturgical days in the older calendars that were a repeating puzzle for me and it took me quite some time to figure them out. The biggest hurdle for me was Septuagesima. What is it? How do you pronounce it? Is it a day or a season? What does it mean? What is its history and significance? Why did this liturgical season disappear in the 1969 Calendar Reform?

Maybe other readers have come across this word and found it head-scratching, so I thought I would touch on this Pre-Lenten season called “Septuagesima” since Septuagesima began this past Sunday, February 9, for those who follow the 1962 Extraordinary Form Calendar.

What is Septuagesima?
The number of liturgical seasons in the 1962 and current Roman Calendars differ only by one season. The Extraordinary Form follows the 1962 calendar which includes a Pre-Lent season called Septuagesima. 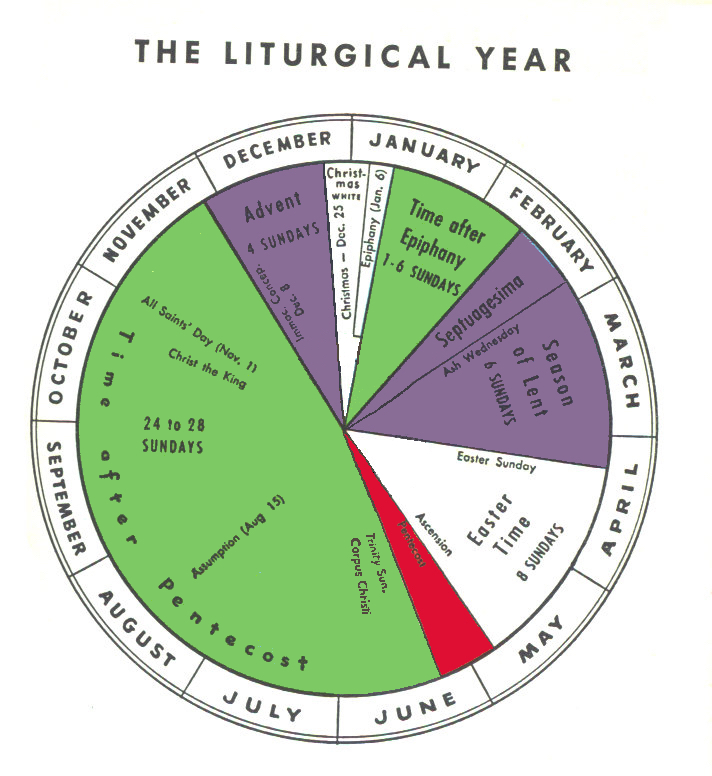 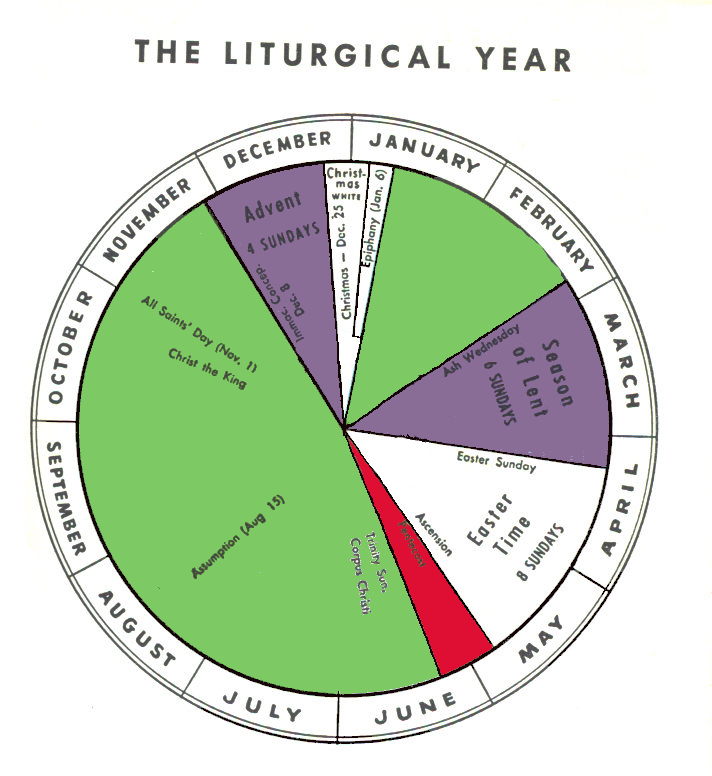 The word Septuagesima is Latin for “seventieth.” It is both the name of the liturgical season and the name of the Sunday. Septuagesima Sunday marks the beginning of the shortest liturgical season. This season is seventeen (17) days long, and includes the three Sundays before Ash Wednesday. The length of the season never changes, but the start date is dependent on the movable date of Easter that can fall between March 22-April 25. Septuagesima Sunday can be as early as January 18.

The origins of Septuagesima as a liturgical season are obscure. This is one of the last liturgical seasons to be added to the Liturgical Calendar. The roots are Roman, and it is not mentioned until the sixth century during the time of Pope St. Gregory the Great. It is often thought St. Gregory himself might have written the Mass formularies, especially since the content reflects so much of the conflict and suffering during that time:

The note of sadness in most of the texts of these Masses has given rise to the theory that they were composed at a time when Italy, and Rome in particular, were once more exposed to barbarian invasions, and threatened with misfortunes similar to this which had overwhelmed them in the fifth century. The sixth century, the time of the institution of Septuagesima, was also a period of pillage and havoc, and hence we have a sorrowful echo in the petitions framed at this time (The Year’s Liturgy, Vol. 1, Fernand Cabrol, p. 101).

The Septuagesima season was to help people ease into Lent as a type of preconditioning program. Liturgically it looked and felt very much like Lent. The Gloria and Alleluia were no longer allowed, the tone was very penitential with the priest wore purple vestments. The main difference would be that there were no fasting requirements in the later centuries.

What’s In a Number?
As I mentioned, the word Septuagesima is Latin for “seventieth.” Pre-Lent, as this period may be called, consists of three Sundays with particular numbered names, Septuagesima (seventieth), Sexagesima (sixtieth), and Quinquagesima (fiftieth). Before you get out your calendar and start counting, even the Church was aware that these numbers do not properly reflect that number of days before Easter, as their names suggest. Septuagesima, Sexagesima, and Quinquagesima Sundays actually fall on the 61st, 54th, and 47th days before Easter, respectively. The titles seem to be arbitrarily chosen. Since the first Sunday in Lent was called Quadragesima (fortieth), the three Sundays before Quadragesima were named after the nearest round figures, 70, 60 and 50.

The Church has always valued the symbolism of numbers. When the penitential season before Easter was added to the Liturgical Calendar, the time was in imitation of Jesus fasting and praying in the desert for forty days. Thus, the Lenten season was created, with the intention of marking forty days of preparation and penance before the feast of Easter, from the First Sunday of Lent including Holy Thursday.

Sundays were never considered as fast days, so the original forty days meant that Lent would only have thirty-six fast-days in the Western or Latin Rite. Thirty-six didn’t meet the special number of Our Lord’s fast days, so adding the supplementary four days beginning with Ash Wednesday brought the number to forty. However, in the Eastern churches there were additional days of the week that were not considered fast days:

We must recognise that this addition to our Roman Lent renders it far more like that of the Greek Church, which, not keeping Thursdays and Saturdays as fast-days, has to anticipate the beginning of her Lent (The Year’s Liturgy, Vol. 1, Fernand Cabrol, p. 102).

and further notes of development:

This season developed from the early sixth to the early seventh centuries as the result of monks extending the forty-day prepaschal fast for progressively longer periods. In doing so they may have been imitating Oriental churches that had to begin their time of penance at least eight weeks before Easter, since they fasted only five days a week, excluding Saturdays as well as Sundays. If Holy Week was not considered part of Lent, then the Lenten fast had to begin nine weeks before Easter, on the day that coincides with the Roman Septuagesima Sunday. Efforts to make the weeks of fasting in Rome match those of the East would have been supported by several seventh-century popes who were Orientals. Another reason for lengthening the fast at this time is that “repeated Gothic and Lombard invasions caused people to be predisposed to supplementary practices of prayers and penance.” By the time of Pope Gregory the Great (590-604), the three Sundays before the beginning of Lent had acquired special Masses, the texts of which are found in the ancient sacramentaries (Patrick Regan, Advent to Pentecost: Comparing the Seasons in the Ordinary and Extraordinary Forms of the Roman Rite, pp. 77-78).

Eventually the Septuagesima season was added to reach the actual number of forty fast days. Later Septuagesima no longer became a time of fasting, but the season remained.

A Need for Reform
It’s easy to see how the Septuagesima season could be bewildering. Visually and liturgically it looked and sounded like Lent: purple vestments, no flowers, no Gloria, no Alleluia, and a very solemn penitential tone. I can imagine the confusion it caused if a person wasn’t in tune with the Church Calendar. “Is it Lent already? Did I miss Ash Wednesday? Am I supposed to be fasting?”

The only difference between Septuagesima and Lent was outside of the liturgy. No fasting was required. In fact, Septuagesima season was the time when Carnival or Mardi Gras would be in high gear for feasting before Ash Wednesday. So there was a juxtaposition of Carnival and Pre-Lent Liturgy.

Interestingly, I found so few pre-Vatican II writings on Septuagesima. Usually liturgical reflections were lumped with the Lenten season, with only a passing reference to Septuagesima. Not a single liturgical author showed a fierce attachment to the season, but usually apologetically explained this “pre-conditioning” time for Lent and then moved on to Lenten reflections.

Vatican II in the document Constitution on the Sacred Liturgy (Sacrosanctum Concilium) from 1963 called for the Liturgical Year to be revised, so that it would “duly nourish the piety of the faithful who celebrate the mysteries of the Christian redemption and, above all, the paschal mystery....”

The minds of the faithful should be directed primarily toward the feasts of the Lord whereby the mysteries of salvation are celebrated throughout the year (SC, 108).

A return to essentiality was the main reason for the reform. The central character of the Paschal Mystery of the Liturgical Year needed to be restored.

Septuagesima Removed
With the call for reform by Vatican II, the Liturgical Calendar was reformed. The Motu Proprio Mysterii paschalis of Pope St. Paul VI from 1969 approved the document General Norms for the Liturgical Year and the Calendar which details the revised calendar.

Both the Motu proprio and General Norms for the Liturgical Year and Calendar do not mention Septuagesima.

The commentary accompanying the General Norms explains that

Septuagesima time, an anticipation of Lent, is suppressed….This revision returns Lent to its original unity and significance. The season of Septuagesima is abolished since it had no meaning of its own….It was difficult to explain the season to the people, and even the names of its Sundays were obscure. Most of all, it took away from the ‘newness’ of the penitence theme, proper to the liturgy of Lent (Regan, Advent to Pentecost: Comparing the Seasons in the Ordinary and Extraordinary Forms of the Roman Rite, p. 77-78)

Therefore, since 1969, the General Roman Calendar and Ordinary Form of the Roman Rite count the original Septuagesima, Sexagesima, or Quinquagesima Sundays as Sundays in Ordinary Time.

A Positive Change
By removing Septuagesima, there is a central focus on the Paschal Mystery in the Liturgical Year. Easter now has the proper position as central and highest feast of the year. 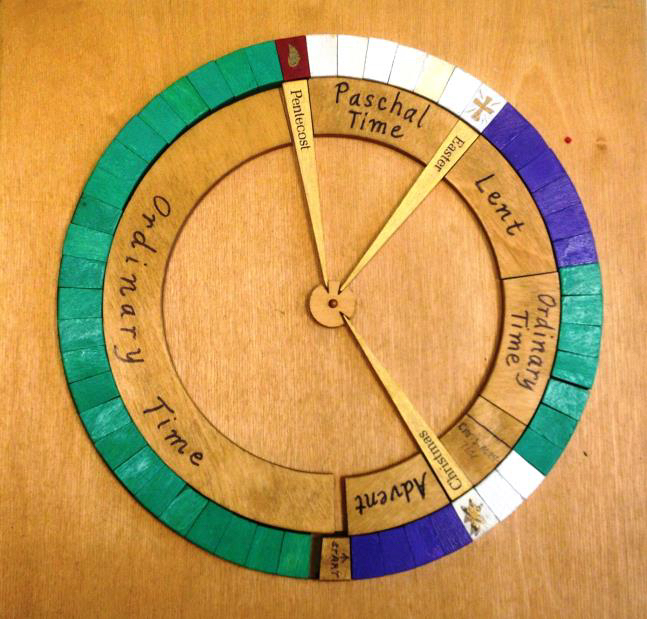 The year is structured so even my young students can see the visual emphasis on Easter compared to the rest of the year. Removing the extra three Sundays of purple means the preparation period before Easter doesn’t equal or outweigh Easter. Easter, with its eight Sundays is the largest of the liturgical seasons. (As an aside, Ordinary Time or “Time of the Year” is technically not a liturgical season. Ordinary Time does not focus on particular aspects of the Redemption mystery. So while it takes up the largest number of weeks, it is not the longest liturgical season.)

In my experience as a catechist with elementary age children, when they understand the penitential and preparatory color is purple and the celebration color is white, they can look at a Liturgical Calendar wheel and visually assess that Easter is the greatest feast of the year.

And with Septuagesima removed, the solemnness and powerful message of Ash Wednesday for a change of heart and penitence is restored.

I love history and tradition, but in this case, I think this was a very wise reform by the Church to remove Septuagesima and restore an essential Liturgical Year.

(Image Note, from http://cgs-usa.org, Liturgical Calendar in Counterclockwise direction, showing that God works outside of time.)