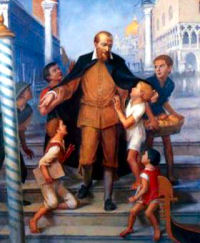 O God, Father of mercies, who sent Saint Jerome Emiliani as a helper and father to orphans, grant through his intercession, that we may preserve faithfully the spirit of adoption, by which we are called, and truly are, your children. Through our Lord Jesus Christ, your Son, who lives and reigns with you in the unity of the Holy Spirit, God, for ever and ever.

Saint Josephine was a young Sudanese girl sold into slavery and brought to Italy where, while serving as a nanny, she was sent to live with the Canossian Sisters of the Institute of the Catechumens in Venice. There she was baptized, and, having reached majority age, was granted her freedom by Italian law. In 1896 she joined the Canossian Daughters of Charity where she served humbly for the next twenty five years. She died after a long and painful illness, during which she would cry out to the Lord: "Please loosen the chains... they are so heavy!" Her dying words were "Our Lady! Our Lady!"According to the 1962 Missal of Bl. John XXIII the Extraordinary Form of the Roman Rite, today is the feast of St. John of Matha, who came from Provence, France and was ordained a priest in Paris. He retired to a solitary life conscious that God was calling him to a special mission, and spent three years in prayer and recollection. He then founded the Trinitarian Order for the ransom of Christians held by the Mohammedans. A great number of houses were founded and innumerable prisoners set free. St. John spent the last two years of his life in Rome, where he died. 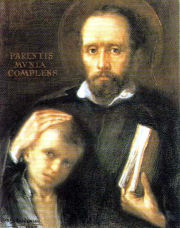 In the years after his ordination, events again called Jerome to a decision and a new lifestyle. Plague and famine swept northern Italy. Jerome began caring for the sick and feeding the hungry at his own expense. While serving the sick and the poor, he soon resolved to devote himself and his property solely to others, particularly to abandoned children. He founded three orphanages, a shelter for penitent prostitutes and a hospital.Around 1532 Jerome and two other priests established a congregation dedicated to the care of orphans and the education of youth. Jerome died in 1537 from a disease he caught while tending the sick. He was canonized in 1767. In 1928 Pius XI named him the universal patron of orphans and abandoned children. —Excerpted from Saint of the Day, Leonard Foley, O.F.M.Patron: Abandoned people; orphans. Symbols: Ball and chain; man shackled with a ball and chain who is attending the sick; man wearing a ball and chain, and receiving an apparition of Mary and the Child Jesus.Things to Do: 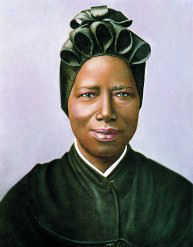 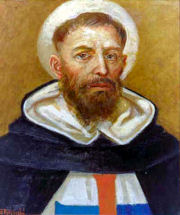 Houses of the order were established at Cerfroid and Rome and in Spain. He was very successful in the work of ransoming captives and his order spread. Very little is known for certain about his life, and in the fifteenth and sixteenth centuries, to bolster his reputation, certain members of his order fabricated stories about him, filled his life with miracles and amazing adventures, and connected the beginnings of his order with St. Felix of Valois.The Trinitarian Order had not preserved any archives of their order and had little knowledge of the life of their founder. Another order, the Order of Mercy, was founded for the same reason as their own, and they compiled a fictitious record of the beginnings of their order. This takes nothing away from the achievements of St. John of Matha, but it does obscure the true story of his life and work.We do know that he received approval of his order from Pope Innocent III in 1198 and that he died in Rome in 1213. His relics were taken to Madrid in 1655, and he was recognized as a saint in 1694. At his death, there were thirty-five houses of the order throughout Europe. The Trinitarians were one of the first religious orders to combine monastic discipline with pastoral work and one of the first to become international in its work. The order flourishes today in several countries and in 1906 made a foundation in the United States. —Excerpted from The One Year Book of Saints, Rev. Clifford StevensPatron: Against lightning; against pestilence; archers; automobile drivers; automobilists; bachelors; Baden, Germany; boatmen; bookbinders; Brunswick, Germany; bus drivers; cab drivers; epilepsy; epileptics; floods; fruit dealers; fullers; gardeners; hailstorms; holy death; lightning; lorry drivers; mariners; market carriers; Mecklenburg, Germany; motorists; pestilence; porters; Rab Croatia; sailors; Saint Christopher's Island; Saint Kitts; storms; sudden death; taxi drivers; toothache; Toses, Girona, Catalonia, Spain; transportation; transportation workers; travellers; truck drivers; truckers; watermen. Symbols: Branch; giant; torrent; tree; man with Christ on his shoulders.Things to Do: