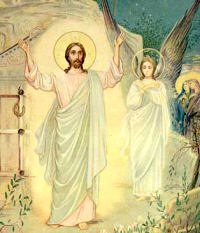 Father of love, source of all blessings, help us to pass from our old life of sin to the new life of grace. Prepare us for the glory of your kingdom. We ask this through our Lord Jesus Christ, your Son, who lives and reigns with you and the Holy Spirit, God, for ever and ever. Amen.

The Lord has risen from the dead, as he foretold. Let there be happiness and rejoicing for he is our King forever, alleluia. According to Moses and the prophets Christ was to suffer all "these things and so to enter into His glory". And what was this "glory" which Christ merited by His sufferings and death? It was His resurrection, His ascension into heaven, His sitting at the right hand of the Father, the homage of all the nations. It was especially the glorification of His body which only a few days ago hung mangled and lifeless on the cross.

Outside of the Easter Octave, the Church celebrates the Optional Memorial of St. Martin I, pope & martyr. St. Martin was born in Todi, Italy. He was elected pope in 649 during the period of the last christological controversy. For his defense of Christ as true God and true man, he was exiled by the Byzantine emperor Constans II to Crimea where he died, broken by his sufferings.Stational Church

Meditation
"In those days: Peter standing up in the midst of the people, said: You know the word that hath been published through all Judea: for it began from Galilee, after the baptism which John preached, Jesus of Nazareth: how God anointed Him with the Holy Ghost, and with power, who went about doing good, and healing all that were oppressed by the devil, for God was with Him. And we are witnesses of all things that He did in the land of the Jews and in Jerusalem, whom they killed hanging Him upon a tree. Him God raised up the third day, and gave Him to be made manifest, not to all the people, but to witnesses preordained by God, even to us, who did eat and drink with Him after He rose again from the dead. And He commanded us to preach to the people, and to testify that it is He who was appointed by God to be judge of the living and of the dead. To Him all the prophets give testimony, that through His name all receive remission of sins who believe in Him." —Acts 10

St. Peter spoke these words to Cornelius, the centurion, and to the household and friends of this gentile, who had called them together to receive the Apostle whom God had sent to him. He had come to prepare them for Baptism, and thus make them the first-fruits of the gentile world, for up to this time the Gospel had been preached only to the Jews. Let us take notice how it is St. Peter, and not any other of the Apostles, who throws open to us gentiles the door of the Church, which Christ has built upon him as upon the impregnable rock. This passage from the Acts of the Apostles is an appropriate Lesson for this day, whose Station is in the basilica of St Peter: it is read near the confession of the great Apostle. Let us observe, too, the method used by the Apostle in the conversion of Cornelius and the other gentiles. He begins by speaking to them concerning Jesus. He tells them of the miracles He wrought; then, having related how He died the ignominious death of the Cross, He insists on the fact of the Resurrection as the sure guarantee of His being truly God. He then instructs them on the mission of the Apostles, whose testimony must be received—a testimony which carries persuasion with it, seeing it was most disinterested, and availed them nothing save persecution. He, therefore, that believes in the Son of God made Flesh, who went about doing good, working all kinds of miracles; who died upon the Cross, rose again from the dead, and entrusted to certain men, chosen by Himself, the mission of continuing on earth the ministry he had begun—he that confesses all this, is worthy to receive, by holy Baptism, the remission of his sins. Such is the happy lot of Cornelius and his companions. —Excerpted from The Church's Year of Grace, Pius Parsch

Monday in the Octave of Easter
Station with San Pietro in Vaticano (St. Peter's in the Vatican):

At Rome, the Station for today is at the basilica of St. Peter. On Saturday, the catechumens received the Sacrament of regeneration in the Lateran basilica of our Savior; yesterday, they celebrated the Resurrection in the magnificent church of St. Mary; it is just that they should come, on this third day, to pay their grateful devotions to Peter, on whom Christ has built his whole Church.