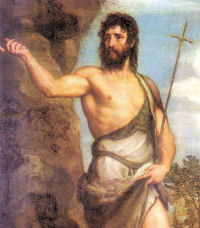 Lord God, may we, your people, who look forward to the birthday of Christ experience the joy of salvation and celebrate that feast with love and thanksgiving. We ask this through our Lord Jesus Christ, your Son, who lives and reigns with you and the Holy Spirit, God, for ever and ever. Amen.

"Rejoice: the Lord is nigh." As Christmas draws near, the Church emphasizes the joy which should be in our hearts over all that the birth of our Savior means for us. The great joy of Christians is to see the day drawing nigh when the Lord will come again in His glory to lead them into His kingdom. The oft-repeated Veni ("Come") of Advent is an echo not only of the prophets but also of the conclusion of the Apocalypse of St. John: "Come, Lord Jesus," the last words of the New Testament.

Today is known as Gaudete Sunday. The term Gaudete refers to the first word of the Entrance Antiphon, "Rejoice". Rose vestments are worn to emphasize our joy that Christmas is near, and we also light the rose candle on our Advent wreath.

Jesse Tree ~ Jonah
Sunday Readings
The first reading is taken from the book of Isaiah 61:1-2a, 10-11. They were uttered to the exiles in Babylon as consolation and promise which were fully and truly realized only when Christ the Messiah came. Christ applied the first two verses of this text to himself when he first preached in the synagogue of Nazareth.The second reading is from the letter of St. Paul to the Thessalonians 5:16-24. He exhorts his converts to thank God always for the gift of faith which they have received. They must respect, while testing, the gifts of the Spirit.The Gospel is from St. John 1:6-8, 19-28. "There was a man sent from God." In this man we see perhaps the only outstanding example among a multitude, of the workings of God's providence among men. The conception, birth, hermitical life in the desert, and the role of precursor of the Messiah, are all the effects of God's intervention in our behalf. John the Baptist was sent by God: "to bear witness to the Light" of the world, to tell the remnant of the Chosen People (and through them the world) that God's eternal plan for man was being implemented; that the incarnation of his divine Son had taken place. John's testimony was surely world-shaking news. Weak, mortal men were to be changed into sons of God by adoption. Pardon for their many sins would be earned by the bodily sufferings of the Incarnate One. His resurrection would conquer death. Men would rise again and enter into the everlasting life of the divine Trinity. Down through two thousand years or so, God had been preparing the world of man for this staggering event. As a special people, he chose Abraham and his descendants. He revealed to them something of his eternal nature and especially his fatherly interest in the human beings he had created. Through his prophets he gave them some fairly clear indications of the culmination of his eternal plan for men, namely, the fact of the incarnation. John was the last of the great line of prophets and he was the greatest of them all. It was his privilege to point out to his audience the Son of God in human nature, the "Lamb of God who takes away the sin of the world," and also to hear God's voice from heaven proclaiming Christ to be his "beloved Son." He was surely a man sent from God. John was sent not only for his contemporaries, for the Jews of his day, but for men of all time. Over the past two thousand years the good news of the incarnation, of our redemption and exaltation, has reached the greater part of mankind. But like the delegates who came down from Jerusalem that day in the year 30 A.D., there have been, in all generations, those who will not hear. These are men who, like the leaders of the Jews in the Baptist's day, are so self-centered and proud that they think they have no need for God or his providence in their lives. Let those of us who believe in God and who know what he has done to give our life on earth its true purpose and meaning, show him by a faithful service how grateful we are for his infinite mercy and kindness. Let us listen to the call of John the Baptist, and from our hearts to repent of our sins. Let us prepare for Christmas, the anniversary of Christ's human appearance on earth, by cleansing ourselves of all sinful attachments, by making a firm resolution to follow the Lamb through life. By so doing we too shall "bear witness to the light." Our living faith will illumine the darkness for others and they, too, will hear the call of God. In that way, each one of us can be another John the Baptist, by giving testimony to God's fatherly interest in all men. Thus can we lead our careless or indifferent brothers back on to the path of salvation, the road to heaven.