Saturday of the Thirty-Third Week of Ordinary Time 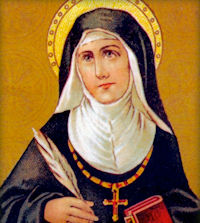 Father of all that is good, keep us faithful in serving you, for to serve you is our lasting joy. We ask this through our Lord Jesus Christ, your Son, who lives and reigns with you and the Holy Spirit, God, for ever and ever. Amen.

Before the reform of the Roman Calendar, today was the memorial of St. Elizabeth of Hungary, which is now celebrated on November 17. It was also the commemoration of St. Pontianus (or Pontian) whose optional memorial is now August 13.

Like a Drop of Water as It Falls into the Ocean
The month of November opens with two Feast Days lived intensely by the Liturgy and by popular piety: All Saints and All Souls. These two feasts give depth to the month traditionally dedicated to praying for those who have crossed the threshold of hope. When we pray for the faithful departed, or better, for those living in the Next World, we are reminded of the ultimate realities of human existence. Authentic Christians are ever more keenly aware of this dimension as they pray for the souls in Purgatory, who are unable to help themselves and rely on our prayers. 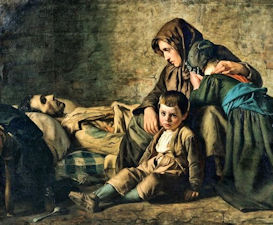 “O good Jesus, forgive us our sins, save us from the fires of Hell and take all souls into Heaven, especially those most in need of your mercy.” With this brief and intense invocation, Our Lady in Fatima asked people to pray to Jesus for the holy souls in Purgatory. Each of us is called to holiness and if we were to take seriously the wonderful vocation to live here in earth in communion with the Lord Jesus, then death would be simply “departing” for Heaven.Thinking of human freedom there comes to mind what Jesus said: “many are called but few are chosen” (Mt 22, 14). God calls everyone to holiness, but few heed the invitation to a banquet of intimate communion with Jesus, the banquet of eternal life which starts here on earth. We are too distracted by many things, like the guests in Gospel who make excuses with the host saying: “I have bought a piece of land and must go and see it. Please accept my apologies." Another said, "I have bought five yoke of oxen and am on my way to try them out. Please accept my apologies." Yet another said, "I have just got married and so am unable to come." (Lc 14, 18-20).We may feel we are entitled to live life without entrusting it day after day to the one who created and redeemed us, without spending it entirely for the Kingdom of God, because there are so many other important things on which apparently it can be spent: success, profit, so-called “well-being”, a career, power… in general anything which favors affirmation of self, among the wide range of opportunities presented by the world today.And so life is full of concerns which suffocate loving attention for our Lord and God, and interest for him disappears. The believer is tempted to put off prayer until 'after' his radical conversion: when I have more time I will pray, when I have less concerns I will give more thought to others, when I feel like it I will go more often to church…The life which the saints lived was not about waiting until tomorrow simply because tomorrow does not belong to us. Ours is only the present moment and it is today that we must convert our hearts, refusing compromise with sin, which is the real enemy of happiness, earthly and heavenly. Grave sin stops supernatural life and, consequently, holiness, that is growth in Jesus Christ.On life's horizon, the believer and every person, has to look at death. Certainly we celebrate earthly birth, surrounding it with much attention, but not to be forgotten either, is the “birth” prelude to the great birth to Heaven! For the believer in Christ, life on earth runs towards eternal Life in God. The saints knew this and their funerals were celebrations, because their death was lived as their “birth” to Heaven.Life on earth is like a drop of water as it falls down into the ocean waiting to embrace it. It falls in a very short time. What a wonderful, consoling truth for the believer, awareness, certainty that comes from faith, of the promises of the Risen Lord, life does not fall into nothingness, it is joined forever with the infinite love of God, plunged into the boundless sea of His Divine mercy! As the Holy Father Benedict XVI, said with these luminous words: “Today we confirm our hope in eternal life founded on the death and resurrection of Christ. ‘I am risen and will be with you forever, says the Lord, and my hand will support you. Whenever you fall, you will fall into my hands and I will be there even at the door of death. Where no one can accompany you and where you can take nothing with you. There I will be waiting to change the darkness into light” (Benedict XVI, Angelus, 2 November 2008). —by Mgr Luciano Alimandi, Agenzia Fides Things to Do: 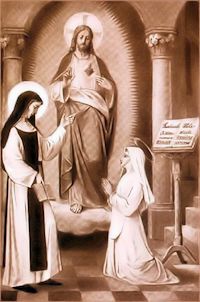 Mechtildis of Helfta and Gertrude were particularly close. Gertrude had been donated, to the convent at the age of five, and Mechtildis, fifteen years her senior, had been largely responsible for her upbringing. As nuns and mystics they both developed a similar spirituality, emphasizing an affective devotion to the humanity of Christ and a strong focus on the Eucharist.In the case of Mechtildis, her first mystical vision occurred while receiving Holy Communion. our Lord appeared to her, held her hands, and left his imprint on her heart "like a seal in wax." Christ furthermore presented his own heart to her in the form of a cup and said, "By my heart you will praise me always; go, offer to all the saints the drink of life from my heart that they may be happily inebriated with it."Mechtildis had a great devotion to the humanity of Christ, for this humanity was the "door" by which human beings and, indeed, all creation entered into union with divinity. In one extraordinary vision she perceived that "the smallest details of creation are reflected in the Holy Trinity by means of the humanity of Christ, because it is from the same earth that produced them that Christ drew his humanity."As a result of her visions, Mechtildis wielded tremendous authority within her community and beyond. She was regarded as a prophet, teacher, and counsellor, "a tender mother of the unfortunate by her continual prayers, her zealous instruction, and her consolations." The teachings and visions of St. Mechtildis were carefully recorded, by her spiritual daughter and lifelong friend, St. Gertrude, in a work entitled the Book of Special Grace. She died on November 19, 1298.—Excerpted from Belgravia Catholic Church of St AnnePatronage:against blindnessOften Represented As: dove on a book; healing a blind nun; receiving a vision of Mary; with Saint Gertrude the GreatThings to Do: