Memorial of St. Gregory the Great, Pope and Doctor of the Church 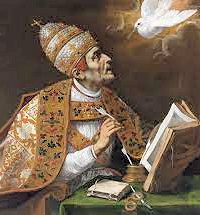 Memorial of St. Gregory the Great: O God, who care for your people with gentleness and rule them in love, through the intercession of Pope Saint Gregory, endow, we pray, with a spirit of wisdom those to whom you have given authority to govern, that the flourishing of a holy flock may become the eternal joy of the shepherds. Through our Lord Jesus Christ, your Son, who lives and reigns with you in the unity of the Holy Spirit, God, for ever and ever.

Blessed Gregory, raised upon the throne of Peter, sought always the beauty of the Lord and lived in celebration of that love.

This is the steward, faithful and prudent, whom the Lord set over his household to give them their allowance of food at the proper time.

St. Gregory the Great (540-604), senator and prefect of Rome, then in succession monk, cardinal and pope, governed the Church from 590 to 604. England owes her conversion to him. At a period when the invasion of the barbarians created a new situation in Europe, he played a considerable part in the transitional stage, during which a great number of them were won for Christ. At the same time he watched over the holiness of the clergy and preserved ecclesiastical discipline, as well as attending to the temporal interests of his people of Rome and the spiritual interests of the whole of Christendom. To him the liturgy owes several of its finest prayers, and the name "Gregorian chant" recalls this great Pope's work in the development of the Church's chant. His commentaries on Holy Scripture exercised a considerable influence on Christian thought, particularly in the Middle Ages. Together with St. Ambrose, St. Augustine and St. Jerome, he is one of the four great Doctors of the Latin Church. 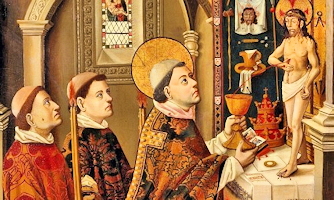