Seventeenth Week in Ordinary Time: O God, protector of those who hope in you, without whom nothing has firm foundation, nothing is holy, bestow in abundance your mercy upon us and grant that, with you as our ruler and guide, we may use the good things that pass in such a way as to hold fast even now to those that ever endure. Through our Lord Jesus Christ, your Son, who lives and reigns with you in the unity of the Holy Spirit, God, for ever and ever.

Optional Memorial of St. Peter Chrysologus: O God, who made the Bishop Saint Peter Chrysologus an outstanding preacher of your incarnate Word, grant, through his intercession, that we may constantly ponder in our hearts the mysteries of your salvation and faithfully express them in what we do. Through our Lord Jesus Christ, your Son, who lives and reigns with you in the unity of the Holy Spirit, God, for ever and ever.

Optional Memorial of Bl. Solanus Casey (USA): O God, who in your providence conformed Blessed Solanus Casey to the image of your Son making him tireless in service to the poor, by his intercession and example, grant also to us the same generosity and joy in giving of ourselves in service to our neighbor. Through our Lord Jesus Christ, your Son, who lives and reigns with you in the unity of the Holy Spirit, God, for ever and ever.

Blessed are they who are persecuted for the sake of righteousness, for theirs is the Kingdom of heaven.

St. Peter Chrysologus (406-450) ("the man of golden speech") earned the title of Doctor of the Church for his eloquent sermons, of which some two hundred remain. He was consecrated as Archbishop of Ravenna in 433. He rooted out all remaining traces of paganism, as well as a number of abuses among the Christians. In his sermons he strongly urged frequent Communion. He is supposed to have given us the saying: "He who wants to laugh with the devil cannot rejoice with Christ." St. Peter died about the year 450 in his native city of Imola.

Today in the US is also the Optional Memorial of Blessed Solanus Casey (1870-1957), an American Roman Catholic priest and a professed member of the Order of Friars Minor Capuchin, who was beatified on November 18, 2017, in Detroit, Michigan.Today's Roman Martyrology commemorates:
—Sts. Abdon and Sennen (d. 250): two eastern martyrs, probably Persians. Their cult at the Pontian cemetery seems to show that they met their death in Rome. In the ninth century, their bodies were translated to the church of St. Mark. —St. Godelieva (1049-1070), martyred wife, strangled by her husband Bertulf of Ghistelles, a Flemish lord.

Peter was born in Imola about the year 400 and studied under Cornelius, bishop of that city, who ordained him deacon. In 433, the archbishop of Ravenna died, and when a successor had been chosen by the clergy and people of Ravenna, they asked Bishop Cornelius to obtain confirmation of their choice from Pope Sixtus III. On his trip to Rome, Cornelius took his deacon, Peter, as his companion; upon seeing Peter, the pope chose him for the see of Ravenna instead of the one selected by the clergy and people of Ravenna.Peter was consecrated and was accepted somewhat grudgingly at first by both the clergy and the people. Peter, however, soon became the favorite of Emperor Valentinian III, who resided at Ravenna and was also highly regarded by Pope St. Leo the Great, the successor of Pope Sixtus.There were still traces of paganism in Peter's diocese, and his first effort was to establish the Catholic faith everywhere, rooting out abuses and carrying on a campaign of preaching and special care of the poor. Many of his sermons still survive, and it is on the basis of these that he came to be known as "the golden word."In his concern for the unity of the Church, Peter Chrysologus opposed the teaching of Eutyches, condemned in the East, who asked for his support. Peter also received St. Germanus of Auxerre to his diocese and officiated at his funeral.Knowing that his own death was near, Peter returned to his own city of Imola and after urging great care in the choice of his successor he died at Imola about the year 450 and was buried in the church of St. Cassian. In 1729, Pope Benedict XIII declared him a Doctor of the Church. —The One Year Book of Saints by Rev. Clifford Stevens Familiar is his dictum: "If you jest with the devil, you cannot rejoice with Christ." Some of his sermons are read in the Breviary. Ravenna, his episcopal city, still harbors treasures of ancient Christian liturgical art dating to his day. Symbols: Dog at his feet; bishop's staff; beehive.
Often Portrayed As: Bishop being presented to Pope Sixtus III by Saint Peter and Saint Apollinaris of Ravenna; bishop holding a dish. Things to Do:

Barney came from a large family in Oak Grove, Wisconsin. At the age of 21, and after he had worked as a logger, a hospital orderly, a streetcar operator, and a prison guard, he entered St. Francis Seminary in Milwaukee—where he found the studies difficult. He left there, and in 1896, joined the Capuchins in Detroit, taking the name Solanus. His studies for the priesthood were again arduous.On July 24, 1904, Solanus was ordained, but because his knowledge of theology was judged to be weak, he was not given permission to hear confessions or to preach. A Franciscan Capuchin who knew him well said this annoying restriction “brought forth in him a greatness and a holiness that might never have been realized in any other way.”During his 14 years as porter and sacristan in Yonkers, New York, the people there recognized Solanus as a fine speaker. James Derum, his biographer writes, “For, though he was forbidden to deliver doctrinal sermons, he could give inspirational talks, or feverinos, as the Capuchins termed them.” His spiritual fire deeply impressed his listeners.Father Solanus served at parishes in Manhattan and Harlem before returning to Detroit, where he was porter and sacristan for 20 years at St. Bonaventure Monastery. Every Wednesday afternoon he conducted well-attended services for the sick. A co-worker estimates that on the average day 150 to 200 people came to see Father Solanus in the front office. Most of them came to receive his blessing; 40 to 50 came for consultation. Many people considered him instrumental in cures and other blessings they received.Father Solanus’ sense of God’s providence inspired many of his visitors. “Blessed be God in all his designs” was one of his favorite expressions.

The many friends of Father Solanus helped the Capuchins begin a soup kitchen during the Depression. Capuchins are still feeding the hungry there today.In failing health, Solanus was transferred to the Capuchin novitiate in Huntington, Indiana, in 1946, where he lived for ten years until needing to be hospitalized in Detroit. Father Solanus died on July 31, 1957. An estimated 20,000 people passed by his coffin before his burial in St. Bonaventure Church in Detroit.At the funeral Mass, the provincial Father Gerald said: “His was a life of service and love for people like me and you. When he was not himself sick, he nevertheless suffered with and for you that were sick. When he was not physically hungry, he hungered with people like you. He had a divine love for people. He loved people for what he could do for them—and for God, through them.”In 1960, a Father Solanus Guild was formed in Detroit to aid Capuchin seminarians. By 1967, the guild had 5,000 members—many of them grateful recipients of his practical advice and his comforting assurance that God would not abandon them in their trials. Solanus Casey was declared Venerable in 1995, and beatified on November 18, 2017.—Excerpted from Franciscan Media Things to Do:

According to legend Abdon and Sennen were two Persians who, under Emperor Decius (249-251), were accused of burying on their estates the bodies of martyrs; for this reason they were thrown into chains at the Emperor's command. As they persistently refused to offer incense to the gods and candidly confessed Jesus as their Lord and God, their imprisonment was made more and more unbearable, and when Decius returned to Rome they were led bound in his triumphal procession. They were dragged before the idols in the capital city, only to spit upon them. Cast to the bears and lions, they were not attacked. Finally, they were put to death with the sword. Their bodies were secretly taken away by Christians, and the deacon Quirinus buried them in his house, near the cemetery of S. Pontian, where an old mural of them may still be seen. They are depicted in Persian clothing, receiving from the Lord the crown of victory. 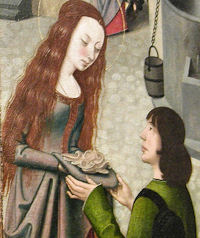 —Excerpted from Saints Calendar and Daily PlannerThings to Do:
Find us on Social Media.