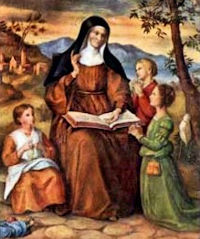 Ordinary Time: Almighty ever-living God, direct our actions according to your good pleasure, that in the name of your beloved Son we may abound in good works. Through our Lord Jesus Christ, your Son, who lives and reigns with you in the unity of the Holy Spirit, God, for ever and ever.

St. Angela Merici: May the Virgin Saint Angela never fail to commend us to your compassion, O Lord, we pray, that, following the lessons of her charity and prudence, and express it in what we do. Through our Lord Jesus Christ, your Son, who lives and reigns with you in the unity of the Holy Spirit, God, for ever and ever.

St. Angela Merici was born in northern Italy. In 1516, she founded the Order of Ursulines, the first teaching order for women approved by the Church.

Meditation: To Act Through Love

Let us take care to act habitually only for the glory of God, to please Him and be pleasing to Him; so that, according to Christ's own prayer, the name of our Father in Heaven may be hallowed, His Kingdom come in hearts and His will be done. A soul thus turned towards God is one taken possession of by love and that ever more and more, for, at each step, she advances more deeply in divine love by constantly renewing these acts of love. Love then becomes a weight that draws the soul, with ever increasing power, to generosity and fidelity in God's service: Amor meus, pondus meum. Hence comes the promptitude of the soul to devote herself to the service of God, to seek the interests of HIs glory; that is true devotion.

What is the meaning of the word devotion? The Latin word devovere means "to be consecrated," vowed to God's service and to accomplish it with ease; devotion is not only to have been consecrated to Christ in baptism, but its is to vow all one's energies and works with ease and promptitude to His service and the glory of His Father.

—Excerpted from Christ the Life of the Soul, by Blessed Abbot Columba Marmion

St. Angela Merici
The saint was born in 1474 in the diocese of Verona. Early in life she dedicated herself to Christ as His bride. After the death of her parents, she desired to live solely for God in quiet and solitude, but her uncle insisted that she manage his household. 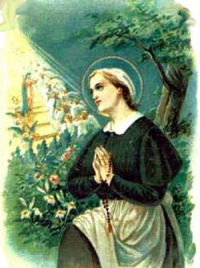 She renounced her patrimony in order to observe most perfectly the rule for Franciscan Tertiaries.

During a pilgrimage to the Holy Land in 1524, she lost her eyesight temporarily. Pope Clement VII, whom she visited in Rome, desired her to remain in the Holy City. Later she founded a society for girls, under the protection of St. Ursula; this was the beginning of the Ursuline Order. St. Angela was almost seventy when she died; her body remained incorrupt for thirty days. Remarkable phenomena occurred at her burial in the Church of St. Afra. She died on January 27, 1540. Angela was canonized in 1807, and added to the Universal Calendar in 1861. She is buried in the Church of St. Afra, Brescia, Italy.—Excerpted from The Church's Year of Grace, Pius ParschSt. Angela Merici belongs to that group of Saints who, in Italy, in the sixteenth century, as if to answer the attacks and challenges of Luther and the Protestants, showed so clearly what reserves of sanctify remained in the Church. The Calendar permits us to make the acquaintance of some of the most illustrious of these, such as Charles Borromeo and Pius V.

As Patroness of her foundation, St. Angela chose St. Ursula, to whom she had a special devotion, and her daughters, the Ursulines, who have spread over the wholes world, have added new luster to that name.

St. Angela also had a great devotion to pilgrimages, and herself made on to the Holy Places, in the course of which her sight, which she had lost, was given back to her. But, with this single exception, her whole life was passed in Italy. Born near Verona, she is buried at Brescia.