The last week of January in the current Ordinary Form of the Calendar has the unique distinction of celebrating three saints that were both educators and also from neighboring regions of northern Italy. These are saints that the Church holds before us as examples and intercessors for those who are teachers (such as me, a homeschooling parent), students, parents, or those who work with children and young people. Since our vocation is to grow in knowledge and holiness of God, this should mean continual learning throughout our lives. With that universal vocation in mind, these saints can appeal and intercede for all of us, as we are all scholars in one way or another. 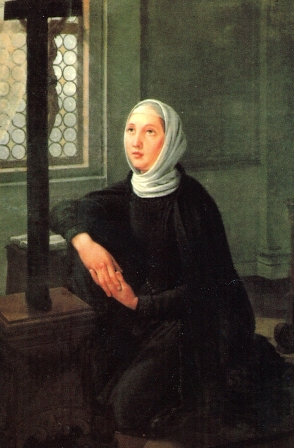 Monday is the Optional Memorial of St. Angela Merici, but in the 1962 Extraordinary Calendar her feast is June 1st. A large emphasis in the 1969 Calendar Reform was to emphasize saint feasts as the date of the saint's death, their birthday into Heaven. This newer feast date is St. Angela's date of death.

St. Angela saw the need in her time for educating young girls. She is often portrayed with a ladder, because she had a dream of a wide golden ladder with a myriad of girls climbing up and getting into heaven. A voice said "Angela, these are all your girls that you are going to collect for God." After that vision, she was sure of her vocation. She founded the Ursulines, which was the first teaching order for women religious. She chose St. Ursula as the patron, because of the tradition that St. Ursula converted 11,010 girls, and they all were martyred for defending the Faith. If St. Ursula could lead so many to heaven, Angela wanted her help!

St. Ursula's feast was removed from the General Calendar in 1969 because of historical difficulties, but the Ursulines continue their devotion to their patron saint.

I've always heard about the Ursulines in relation to their devotion to Our Lady of Prompt Succor. When the order founded their convent in New Orleans they brought this devotion of Our Lady. Her protection, especially through war and turbulent weather, has been noted for two centuries.

There are two other interesting items to note about St. Angela. She was a Franciscan Tertiary throughout her life, and so is also honored  by the Franciscan Family. Secondly, she died in 1540, but her body remains incorrupt and is displayed in Brescia, Italy. Her skin is darkened, but the body is in a state of preservation. She is mentioned and pictured in the book The Incorruptibles by Joan Carroll Cruz.

Of note in the Liturgical Year library is the Litany of St. Angela, and Nameday Celebration Ideas for St. Angela.

St. Angela was originally from Verona, the Veneto region of Northern Italy. Polenta and Risi e bisi (Rice and peas) are two of the signature dishes from this region. These are good options for those with gluten intolerances. 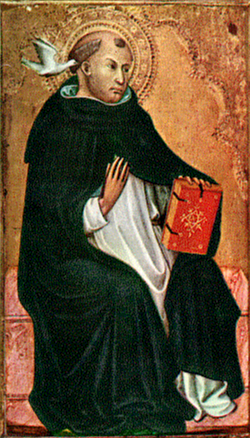 January 28 is the Memorial of St. Thomas Aquinas. In the 1962 Extraordinary Form Calendar his feast is celebrated on March 7, the date of his death, but this date almost always falls in Lent. The 1969 Calendar Reform emphasizes the liturgy of the Lenten season. If an obligatory memorial falls during this time, it is celebrated as an optional memorial and even then the priest wears violet vestments and only the Collect of the saint is prayed during the Mass. St. Thomas Aquinas is an important doctor and saint, so the Church moved the memorial to January 28, the day on which his body was transferred to Toulouse in 1269.

St. Thomas was born in the family castle in the Lombardy region of Italy near Naples. He joined the young Dominican Order in 1244, lived and taught and wrote in France, Germany and Italy, and died on March 7, 1274 of natural causes near Terracina in Italy.

Of special note are the three talks from Benedict XVI from Catholic Culture's Library on the Angelic Doctor. The activities include various Eucharist hymns written by St. Thomas, and Nameday Ideas and Prayers.

St. Thomas is also from northern Italy, the Lombardy region. Some of the more traditional dishes are risotto alla milanese (which contains saffron, which hints back to the star symbol of St. Thomas), polenta (again), and Mostarda di Cremona and the famous Panettone breads for desserts. 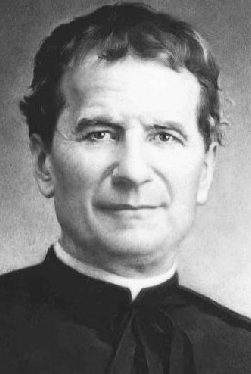 January 31 is the Memorial of St. John Bosco, and this feast day is the same for both the current and 1962 liturgical calendars.

Like St. Angela, St. John chose a special patron of his religious order, his being St. Francis de Sales. He named his religious order the Society of St. Francis de Sales (which is popularly known as the Salesians). Their work at first was to educate and help poor or orphaned boys, but the apostolate has expanded to where there is a need. He also helped girls, by founding the Institute of the Daughters of Mary Auxiliatrix with the help of St. Mary Dominic Mazzarello. There have been several books on his educational philosophy, including Keys To The Hearts Of Youth. Newly back in print is the children's biography  A Story of St. John Bosco by Brother Ernst.

Similar to St. Angela, St. John Bosco's body is incorrupt. It is on display in Turin, along with the body of his co-foundress, St. Mary Mazzarello.

Of special note is the article Don Bosco, Seeker of Souls in the Catholic Culture library. Other highlights in the Liturgical Year section are Nameday Ideas for John and Nameday Prayers.

St. John was born in Castelnuovo near Turin, Italy, which is Piedmont region. The Piedmont is known for their wine and herbs. Highlighted recipes from this region are grissini (fantastic crunchy breadsticks), polenta and stuffed raw peppers.

Our family doesn't always celebrate saints' days with special foods. Our usual course is read the Mass readings and Collect prayer (or attend Mass), read a short biography or picture book, perhaps look at religious art or work on coloring pages to discuss the symbolism of the saint. We might do some long term projects like planning to sow a few Italian herbs in our spring garden plans to honor our Italian saints.

But having this commonality with three saints in one week, it seems a good idea to have an Italian night this week to celebrate these saints. Northern Italy has less emphasis on pasta and more on rice and polenta dishes, but that doesn't mean you can't make your favorite ravioli, spaghetti or lasagna recipes and share freshly-baked Italian bread or breadsticks.

As adults, one of our favorite ways to honor a saint is to toast the saint with a bottle of wine. Often we will choose a wine from the regions from which the saints were either born or worked. Since all these saints hail from Northern Italy, it won't be hard to find a good bottle of wine from either the Lombardy, Piedmont or Veneto regions and recall the lives of these saints.

Through the intercession of Angela, Thomas and John, may we continue to learn more and grow deeper in our love for God every day. Saints Angela Merici, Thomas Aquinas and John Bosco, pray for us!