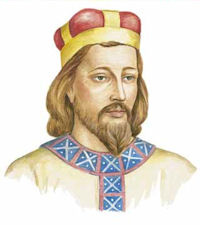 Grant us, O Lord God, the patience of your martyrs Saint Lorenzo and his companions in your service and in that of our neighbour, because they who endure persecution for the sake of justice are blessed in your kingdom. Through our Lord Jesus Christ, your Son, who lives and reigns with you in the unity of the Holy Spirit, God, forever and ever.

O God, who taught the Martyr Saint Wenceslaus to place the heavenly Kingdom before an earthly one, grant through his prayers that, denying ourselves, we may hold fast to you with all our heart. Through our Lord Jesus Christ, your Son, who lives and reigns with you in the unity of the Holy Spirit, God, for ever and ever.

St. Wenceslaus was Duke of Bohemia, who after many trials in governing and evangelizing his people, suffered martyrdom at the hands of his brother in the year 929.

In the 17th century (1633-1637) St. Lawrence Ruiz and his companions shed their blood for Christ in Nagasaki, Japan. These martyrs were members of the Order of St. Dominic. They were nine priests, two religious, two sisters, and three laymen. Among the latter was Lawrence Ruiz, a family man from the Philippines. They abundantly sowed the missionary seed of Christianity with the example of their life and death.Today in Spain is the feast of St. Simon de Rojas, a Spanish priest of the Trinitarian Order, who died in 1624. He was known as the "Apostle of the Ave Maria," for his devotion to the Blessed Virgin Mary. A person of many abilities, Simon was a theologian and a spiritual writer, as well as a friend and benefactor of the poor. He was canonized by Pope Saint John Paul II on July 3, 1988.Historically today is the feast of St. John of Dukla who was born in Dukla, Poland in 1414. He joined the Friars Minor Conventual, a religious order who strictly adhered to their rule of poverty and obedience. Though he went blind later in age he was able to prepare sermons with the help of an aide. His preaching was credited in bringing people back to the Church in his province. Soon after his death, there was an immediate at his tomb and several miracles were attributed to him. On June 10, 1997, he was canonized by Pope Saint John Paul II in a Mass at Krosno, Poland before approximately one million people. 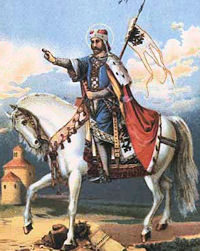 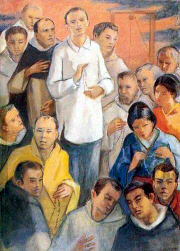 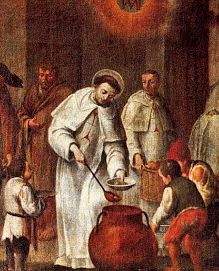 It was his mother, the virtuous Constanza, who instilled and helped grow in the soul of Simon the love of Mary. The veneration that she and her husband Gregorio constantly gave to Mary, makes it easily understandable why the first words that Simon, who had been a slow learner and stuttered, said at the age of fourteen months, were "Ave, Maria". He was only repeating the prayer so frequently recited by his parents.His greatest joy was to visit Marian shrines, to pray to Mary and with Mary, to imitate her virtues, to sing her praises, to acknowledge her importance in the mystery of God and of the Church. Through profound theological studies, he came to understand even better the mission of Mary in cooperation with the Trinity for the salvation of the human race and the sanctification of the Church. He lived his religious vows in the imitation of Mary. He held that, for everyone to be completely of God, as Mary had been, it was necessary to become her slaves, or better, slaves of God in Mary; for this reason he established the Congregation of the Slaves of Mary for the greater glory of the Trinity, in praise of the Virgin, in the service of the poor. For him, to be a slave of Mary meant belonging totally to her: "Totus tuus" in order to unite oneself more intimately to Christ and in Him through the Spirit, to the Father.The Congregation founded by him was intended for the laity: persons of every social class could join. The members, who included the King and his children, dedicated themselves to honor Mary by giving maternal help to her favorite children: the poor. This work still continues in Spain. Fr. Simon, who is held to be one of the greatest contemplatives of his time and who in his work, "The Greatness of Prayer" is clearly a great instructor of prayerful souls, wanted the contemplative dimension joined to the active through works of mercy. Faithful to the Trinitarian charism, he promoted the ransom of captives, he helped relieve the many needs of the poor, he consoled the sick, the destitute and the left-out of every kind. He accepted duties at the Court, only on the condition that he be able to continue his work with the poor, whom he helped in a thousand ways, always with a smile on his face and at any hour of the day or night. The expressions of his love of Mary are manifold. The painters who depicted him, put the greeting "Ave Maria" on his lips, words he uttered so frequently that he was familiarly called: "Father Ave Maria". He had thousands of images of the Most Holy Virgin printed with the inscription: "Ave Maria", which he also sent abroad. He had rosaries made with seventy-two blue beads on a white cord, symbols of the Assumption and the Immaculate Conception, and also a reminder that Mary, according to the belief of the time, lived to the age of 72 years. He sent these rosaries everywhere, even to England. Using his influence at Court, he had the angelic greeting so dear to him, "Ave Maria", engraved in letters of gold on the facade of the royal palace in Madrid. On June 5th, 1622, he petitioned the Holy See for the approval of his liturgical text composed in honor of the Sweet Name of Mary, which later, Pope Innocent XI extended to the universal Church.After his death on September 29th, 1624, the honors bestowed on him at his funeral, took on the aspect of an anticipated canonization. For twelve days, the most reknown preachers of Madrid exalted his virtues and his holiness. Impressed with this unanimous veneration, on October 8th, shortly after Fr. Simon's death, the Papal Nuncio ordered the beginning of the process leading to his glorification by the Church. His heroic virtues were recognized by Clement XII, on March 25th, 1735; he was beatified by Clement XIII on March 19, 1766; and on July 3rd, 1988, just before the close of the Marian Year, Pope John Paul 11, entered the name of this great servant of Mary and Father of the poor on the list of the Saints.—©Libreria Editrice Vaticana Things To Do: