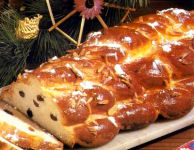 The name of this bread, Vanocka (Vanochka) derives from the Czech term Vanoce, meaning Christmas in English. The word stems from two roots, or better yet the (Old High) German word for Christmas, Weihnachten. The first part (Weih) was left untranslated, while the second part (nachten) was properly translated, meaning "nights." Thus Vanoce means blessed or celebrated night. The suffix -cka or -chka means something done or used for specific reason, in this case because of Christmas. (submitted by Catholic Culture reader, Pavel Miskovsky)

The sweet bread which sounded most intriguing to me was a Bohemian bread called Vanochka. Even the name piqued my interest. The dough was divided into nine parts and twisted and braided until a real Bambino lay high in the pan. When I first heard of the feat, I thought that was too hard for me or any other busy American housewife. But the idea haunted me. I wanted to know if it would work, and if I could do it. Such giggles as went into that cake you have never heard.

We rolled and pulled the nine pieces of dough until they were long strands, each about three feet long. The kitchen looked like the snake house at the zoo. We had ropes of Vanochka on the table and on the counter and even one coiled up on a chair. If I only could have had a flute to do a little charming, it would have been easy, but Christine wanted one snake and Kathy wanted another. Luckily, the older children were outdoors gathering evergreen. Four of the strands were braided and placed in a large pan on greased paper. I found I didn't know how to braid anything with four strands, but I learned on Vanochka. There was just no turning back. On this wide braid, another regular three piece braid was placed. That was a good trick in itself. Finally, a simple twist of two ropes rested on top of the other braids and crowned the cake.

Such a cake you never saw. It was beautiful if I do say so myself. There was the Christ child, with the swaddling clothes as neat as though they were just wrapped. The children loved it as much as I did. If I can do it, you can. So come on, roll up your sleeves and overwhelm your families. They will never guess how you put Vanochka together.

Cut butter into flour (as for piecrust). Add sugar, salt and lemon rind. Dissolve yeast in milk with two tablespoons sugar and four tablespoons flour. Add to first batter. Beat in eggs and milk. Knead until smooth. Add fruit. Cover and let rise for two hours. Braid as described: Roll and pull the nine pieces of dough until they are long strands, each about three feet long. Braid four of the strands and place in a large pan on greased paper. On this wide braid, place another regular three piece braid. Finally, place a simple twist of two ropes on top of the other braids. Place dough in 11 by 18 inch tin. Brush cake with beaten egg white. Let it rise again for one and one-half hours. Varnish with beaten egg whites and sprinkle with chopped almonds. Bake in moderate oven (350°) about 75 minutes.