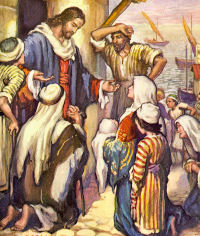 Today is the feast of St. Camillus de Lellis which is superseded by the Sunday Liturgy.Click here for commentary on the readings in the Extraordinary Form of the Roman Rite.

As children we have access to our Father's "possessions" (Gospel). "By virtue" of our Baptism, "we (all) cry, . . .Father! unto our God (Epistle).In the business of salvation the Father has appointed us as "stewards" over human goods and Divine graces, to use, not to abuse them. The Introit recalls that even though we now receive "mercy," yet one day we must stand before "Justice."The meaning of this Gospel story is: "Act prudently," you children of God; use material treasures so as to make eternal friends; exercise your talents in the spiritual and corporal works of mercy. Those whom you help to save, will help save you.Excerpted from My Sunday Missal, Confraternity of the Precious Blood
Find us on Social Media.