Wednesday of the Seventh Week of Easter 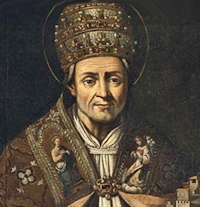 Graciously grant to your Church, O merciful God, that, gathered by the Holy Spirit, she may be devoted to you with all her heart and united in purity of intent. Through our Lord Jesus Christ, your Son, who lives and reigns with you in the unity of the Holy Spirit, God, for ever and ever.

St. Peter Celestine was born in 1221 and retired into the desert when he was hardly an adolescent. His virtues soon drew disciples around him. This was the origin of the branch of the Benedictine order known as the Celestines. According to the 1962 Missal of St. John XXIII the Extraordinary Form of the Roman Rite, today is his feast.

It is also the feast of St. Prudentiana, daughter of a Roman senator, who consecrated herself wholly to Christ and died in the year 160 when she was sixteen. The Roman Martyrology also mentions "St. Yves, priest and confessor, who for the love of Christ, defended the cause of the orphan, the widow and the poor."

St. Peter Celestine
Saint Peter Celestine was the eleventh of the twelve children of a poor Italian farmer. As a child, Peter had visions of our Blessed Lady, Angels and Saints. His heavenly visitors encouraged him in his prayers and chided him when he fell into any fault. His mother, though only a poor widow, sent him to school, feeling sure that he would one day be a Saint. 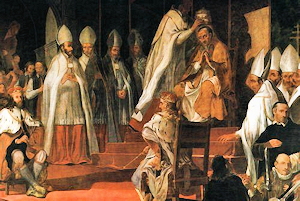 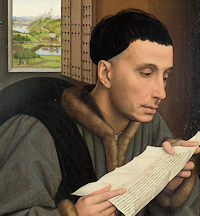 St. Urban's body was transferred to the Church of St. Praxedes in the year 818, where it remains to this day. Some hagiographers hold that his grave is in the Church of St. Cecilia in Rome. Vintagers honor Pope St. Urban as their patron.—Excerpted from The Church's Year of Grace, Pius Parsch. Symbols: Vine and grapes; fallen idol beneath broken column; scourge; stake; severed head.Things to Do: