Thursday of the Nineteenth Week of Ordinary Time; Optional Memorial of Saints Pontian, pope and martyr and Hippolytus, priest and martyr 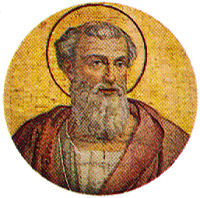 Almighty ever-living God, whom, taught by the Holy Spirit, we dare to call our Father, bring, we pray, to perfection in our hearts the spirit of adoption as your sons and daughters, that we may merit to enter into the inheritance which you have promised. Through our Lord Jesus Christ, your Son, who lives and reigns with you in the unity of the Holy Spirit, one God, for ever and ever.

May the precious long-suffering of the just, O Lord, we pray, bring us a great increase of love for you and always prompt in our hearts constancy in the holy faith. Through our Lord Jesus Christ, your Son, who lives and reigns with you in the unity of the Holy Spirit, one God, for ever and ever.
show

Pontian, a Roman and son of Calpurnius, had enjoyed a peaceful reign over the Roman Church during Severus' time, but soon found himself among the first victims of this new emperor. Rounded up with the antipope Hippolytus, Pontian was deported to the labor mines. Since deportation was a life sentence which few survived, Pontian felt obligated to abdicate so that a successor might quickly preside over the Holy See. He is the first pope known to have abdicated.While imprisoned, Hippolytus reconciled his differences with Pontian and even ordered his followers to bring themselves back to the Church. Before he succumbed to the harsh treatment of the mines, Hippolytus became a true confessor of Christ.Pontian, in the mines only two months, was brutally beaten to death by his jailers. His body, with that of Hippolytus, was returned to Rome approximately a year later, during the pontificate of Fabian. He was buried in the cemetery of Calixtus and was rightfully honored by the Church as a martyr. Excerpted from The Popes: A Papal History, J.V. BartlettPatron: Hippolytus: Horses; prison guards; prison officers; prison workers. Symbols: Hippolytus: Armour; bunch of large kesy' spear; tails of wild horses; lance; iron hook; horses.

Cassian had apparently been a schoolteacher for some time. Then a widespread persecution of Christians commenced. Roman officials arrested him because he was known, or at least suspected, to be a Christian. He was taken before the governor, and the governor demanded, as usual, that he offer sacrifice to the gods. Naturally, Cassian refused to perform this act of apostasy, so he was condemned to death.Now, the Romans had many set types of execution to choose from, but sometimes they invented others. Knowing that Cassian was a schoolmaster, the governor decided that it would be a clever novelty to have him stabbed to death by his own pupils!The schoolmaster was therefore stretched out on the ground and fixed down securely. Then Cassian's former students were brought in. They had not particularly liked their teacher because he had been strict with them. Given the signal, therefore, they set about with a fiendish joy to torment him. They broke their wooden writing tablets over his head, carved their initials carefully on his flesh, and finally stabbed him all over with their pens. Cassian meanwhile accepted their blows with much patience and no malice. He died bloodied with a thousand little wounds. — Excerpted from Father Robert F. McNamara, Saints Alive

St. Radegund's father was a king; when he was conquered by King Theodoric of Austrasia and King Clotaire I of Neustria, Radegund was taken captive at the age of twelve by Clotaire, son of Clovis, the first Christian King of the Franks. She lived at Athies until she was 18, when Clotaire brought her to Vitry and married her. Clotaire was "a man of shocking character." As queen, Radegund spent her time doing charitable work with the poor and the captives. She ministered to lepers and founded a hospital for them. Radegund had been married to Clotaire for six years when he killed her brother. Unable to bear his cruelties any longer, she became a nun, with his permission. Radegund had a double monastery built in Poitiers called Holy Cross. When Clotaire decided to bring her back to court, St. Germanus interceded on her behalf, and the repentant Clotaire sent Germanus back to Radeund to ask her forgiveness and prayers. After her death, Radegund's face shone "with a brightness surpassing the beauty of lilies and roses."

—Excerpted from 2009 Saints Calendar
Find us on Social Media.