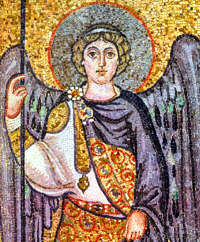 According to the 1962 Missal of St. John XXIII the Extraordinary Form of the Roman Rite, today is the feast of the apparition of St. Michael. The feast commemorates an apparition of St. Michael on the summit of Monte Gargano, in Italy on the Adriatic coast, and the dedication of the sanctuary built on the site of the apparition. It is also the feast of St. Acathius, a priest at Sebaste, Armenia, during Diocletian's persecution.

Apparition of St. Michael
It is evident from Holy Scripture that God is pleased to make frequent use of the ministry of the heavenly spirits in the dispensations of His providence in this world. The Angels are all pure spirits; by a property of their nature, they are immortal, as is every spirit. They have the power of moving or conveying themselves at will from place to place, and such is their activity that it is not easy for us to conceive of it. Among the holy Archangels, Saints Michael, Gabriel, and Raphael are particularly distinguished in the Scriptures. Saint Michael, whose name means Who is like unto God?, is the prince of the faithful Angels who opposed Lucifer and his followers in their revolt against God. Since the devil is the sworn enemy of God’s holy Church, Saint Michael is given to it by God as its special protector against the demon’s assaults and stratagems. 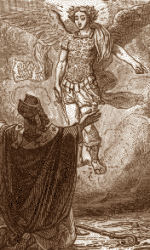 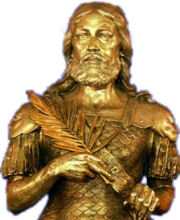 Asked by him what was his name and country, Achatius replied, "My name is Christian because I am a follower of Christ; men call me Achatius. My country is Cappadocia. There my parents lived; there I was converted to the Christian faith, and was so inspired by the combats and sufferings of the Christian Martyrs that I am resolved to shed my blood for Christ to attain heaven." Then Bibianus ordered him to be beaten with leaden clubs, after which he was loaded with chains and returned to the prison.After Achatius had been in prison seven days, Bibianus was called to Byzantium and ordered all prisoners to be transported there. On the journey Achatius suffered greatly, for his entire body was covered with wounds, his chains were galling, the guards were cruel and the roads were bad. He thought himself dying. Praying to God, a voice from the clouds answered him, "Achatius, be firm!" The soldiers of the guard were terrified and asked each other, "What is this? How can the clouds have a voice?" Many prisoners were converted. The next day some of the converts saw a number of men in shining armor speaking to Achatius, washing his wounds and healing them, so that not even a scar remained.Arrived in Byzantium the Saint was again cast into prison, and after seven days dragged before the judge. When neither promises nor the cruelest torments shook the constancy of the brave confessor of the Faith, the judge sent him to Flaccus, the proconsul of Thracia, who imprisoned him for five days and meanwhile read the records of his former trials. Then he ordered him to be beheaded. Achatius suffered death for Christ on May 8, 311.Note: St. Achatius' name is also spelled Acacius. He is invoked for headaches. — Excerpted from the The Fourteen Holy Helpers by Fr. Bonaventure Hammer, O.F.M.Patron: Against headaches and at the time of death's agony.Symbols: Pictured with a crown of thorns.Things to Do: