Tuesday of the Second Week of Lent; Feast of St. John Ogilvie, priest and martyr (Scotland) 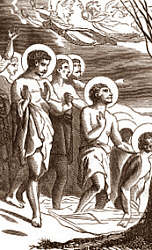 Guard your Church, we pray, O Lord, in your unceasing mercy, and, since without you mortal humanity is sure to fall, and directed to all that brings salvation. Through our Lord Jesus Christ, your Son, who lives and reigns with you in the unity of the Holy Spirit, God, for ever and ever.

St. Marie-Eugénie de Jésus is honored today. She was a religious sister who founded the Congregation of the Religious of the Assumption in 1839. On June 3, 2007, she was canonized in Vatican City by Pope Benedict XVI.

According to the 1962 Missal of St. John XXIII the Extraordinary Form of the Roman Rite, today is the feast of the Forty Holy Martyrs of Sebaste, a group of forty soldiers who suffered a martyr's death for their steadfast faith in Christ, by freezing in a lake near Sebaste, in the former Lesser Armenia (now Sivas in central-eastern Turkey). Today Catholics in Scotland celebrate the feast of St. John Ogilvie, who was educated as a Calvinist and was received into the Church at Louvain by Father Cornelius a Lapide. After becoming a Jesuit at the age of seventeen, he was ordained to the priesthood in 1613, and at his own request was sent on a perilous Scottish mission. He was eventually betrayed, but during a long imprisonment no tortures could force him to name any fellow Catholics. Though his courage was admired by the judges he was condemned as a traitor and hanged at Glasgow. The customary beheading and quartering were omitted owing to undisguised popular sympathy, and his body was hurriedly buried in the churchyard of Glasgow cathedral. Stational Church

The forty, not merely undismayed but filled with joy at the prospect of suffering for Jesus Christ, said: “No doubt it is difficult to support so acute a cold, but it will be agreeable to go to paradise by this route; the torment is of short duration, and the glory will be eternal. This cruel night will win for us an eternity of delights. Lord, forty of us are entering combat; grant that we may be forty to receive the crown!”There were warm baths close by, ready for any among them who would deny Christ. One of the confessors lost heart, renounced his faith, and went to cast himself into the basin of warm water prepared for that intention. But the sudden change in temperature suffocated him and he expired, losing at once both temporal and eternal life. The still living martyrs were fortified in their resolution, beholding this scene.Then the ice was suddenly flooded with a bright light; one of the soldiers guarding the men, nearly blinded by the light, raised his eyes and saw Angels descend with forty crowns which they held in the air over the martyrs’ heads; but the fortieth one remained without a destination. The sentry was inspired to confess Christ, saying: “That crown will be for me!” Abandoning his coat and clothing, he went to replace the unfortunate apostate on the ice, crying out: “I am a Christian!” And the number of forty was again complete. They remained steadfast while their limbs grew stiff and frozen, and died one by one.Among the forty there was a young soldier named Meliton who held out longest against the cold, and when the officers came to cart away the dead bodies they found him still breathing. They were moved with pity, and wanted to leave him alive, hoping he would still change his mind. But his mother stood by, and this valiant woman could not bear to see her son separated from the band of martyrs. She exhorted him to persevere, and lifted his frozen body into the cart. He was just able to make a sign of recognition, and was borne away, to be thrown into the flames with the dead bodies of his brethren. Their bones were cast into the river, but they floated and were gathered up by the faithful.Excerpted from Little Pictorial Lives of the Saints, a compilation based on Butler’s Lives of the Saints and other sources by John Gilmary Shea (Benziger Brothers: New York, 1894); Vie des Saints pour tous les jours de l’année, by Abbé L. Jaud (Mame: Tours, 1950).Things to Do: 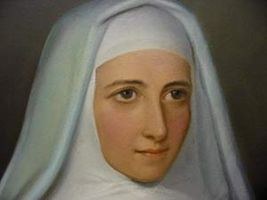 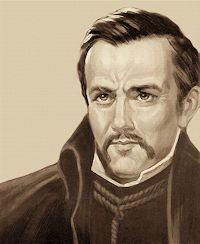 Born in 1579 at Drum, Keith, Scotland. Walter Ogilvie was a Scottish noble who raised his son John in the state religion of Scotland, Calvinism. John converted to Catholicism at the age of 17 in Louvain, Belgium. Blessed John joined the Jesuits soon after in 1597, and was ordained in Paris in 1610. He was sent to work in Rouen, France.

He repeatedly requested assignment to Scotland where wholesale massacres of Catholics had taken place, but by this point the hunters were searching more for priests than for those who attended Mass. 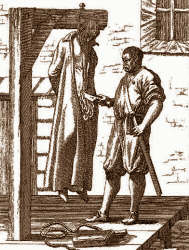 The Jesuits were determined to minister to the oppressed Catholic laity. When captured, they were tortured for information, then hanged, drawn, and quartered. Ogilvie's request was granted, and he returned to Scotland in November 1613. He worked as an underground missionary in Edinburgh and Glasgow, dodging the Queen's priest-hunters, disguising himself as a soldier named Watson. After 11 months in the field, John was betrayed, imprisoned, interrogated, then tortured for the names of active Catholics. He suffered in silence. He is the Church's only officially recorded Scottish martyr. He died hanged on March 10, 1615 in Glasgow, Scotland and was canonized by Paul VI on October 17, 1976.Things to Do:

Wednesday of the Third Week of Lent, Station with San Sisto il vecchio (St. Sisto):
This church was called "San Sisto il vecchio" because it is the oldest convent in Rome of the sons of the Saint of Callaroca. The current construction is quite recent; in fact it was built in 1700 by the Dominican Pope Benedict XIII (1724-1730). He certainly did it to honor the memory of the Founder of the Order, San Domenico, who had his first Roman residence here; Honorius III, after having approved the Order of Preachers, gave him this temple. Tradition has it that at this church Pope Sixtus II met with San Lorenzo to whom he predicted the martyrdom which, moreover, happened after three days.