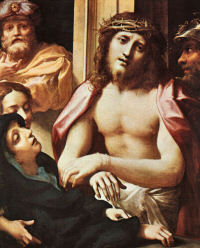 Almighty ever-living God, look with compassion on our weakness and ensure us your protection by stretching forth the right hand of your majesty. Through our Lord Jesus Christ, your Son, who lives and reigns with you in the unity of the Holy Spirit, God, for ever and ever.

Before the reform of the Roman Calendar this was the feast of St. John de Brefeuf. His feast has been transferred to October 19.Stational Church