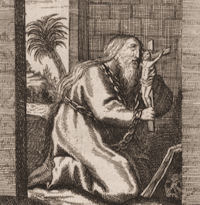 Historically today is the feast of St. Hilary, pope from 461 to 468 and guardian of Church unity and St. Romanus of Condat who founded the abbeys of Condat and Leuconne, and the convent of La Beaume, among others.

Bl. Daniel Brottier was beatified by Pope St. John Paul II on November 25, 1984. He was a French Roman Catholic priest in the Congregation of the Holy Spirit (who currently refer to themselves as Spiritans). He was awarded the Croix de guerre and the Légion d'honneur for his services as a chaplain during World War I, did missionary work in Senegal, and administered an orphanage in Auteuil, a suburb of Paris.Stational Church 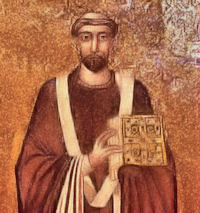 To replace a man like Leo was not easy, but the next pope was a man after Leo's heart, the archdeacon Hilary. Hilary was a Sardinian who had joined the Roman clergy and had been sent by St. Leo as one of the papal legates to the council at Ephesus in 449. This council, intended to settle the Monophysite affair, got out of hand. Packed with Monophysites and presided over by Dioscorus, the patriarch of Alexandria, the assembly refused to listen to the protests of the papal legates. Dioscorus steam-rollered through the council a condemnation of the orthodox and saintly Flavian, patriarch of Constantinople, and an approval of the Monophysite leader Eutyches. In vain Hilary protested. He had to fly in fear for his life and hide in a chapel of St. John the Evangelist. It was only with difficulty that he got back to Rome. No wonder St. Leo called this Ephesus council a gathering of robbers!

As pope, Hilary worked hard to foster order in the Gallic hierarchy. When a certain Hermes illegally made himself archbishop of Narbonne, two Gallic delegates came to Rome to appeal to Pope Hilary. He held a council at Rome in 462 to settle the matter. He also upheld the rights of the see of Arles to be the primatial see of Gaul. From Spain also came appeals of a similar nature. To settle these Hilary held a council at Rome in 465. This is the first Council at Rome whose acts have come down to us. According to the "Liber Pontificalis" he sent a letter to the East confirming the ecumenical councils of Nicaea, Ephesus, and Chalcedon, and the famous dogmatic letter of his predecessor St. Leo to Flavian. He also publicly in St. Peter's rebuked the shadow-emperor Anthemius for allowing a favorite of his to foster heresy in Rome.St. Hilary deserves great credit for his work in building and decorating churches in Rome. Of especial interest is the oratory he built near the Lateran, dedicated to St. John the Evangelist. The Pope attributed his escape from the wild Monophysites at Ephesus to the intercession of the Beloved Disciple, and to show his gratitude he built this beautiful oratory. Over its doors may still be seen the inscription, "To his deliverer, Blessed John the Evangelist, Bishop Hilary, the Servant of Christ." Hilary built two more churches and spent freely in decorating still others. The gold and silver and marble used so lavishly by this Pope in adorning the Roman churches indicate that the wealthy families of Rome must have saved something from the grasping hands of Goths and Vandals.St. Hilary died on February 29. His feast is kept on February 28.--Excerpted from Defending the Faith 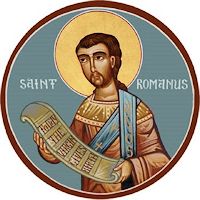 Romanus at thirty-five years of age left his relatives and spent some time in the monastery of Ainay at Lyons, at the great church at the conflux of the Saône and Rhone which the faithful had built over the ashes of the famous martyrs of that city; for their bodies being burned by the pagans, their ashes were thrown into the Rhone, but a great part of them was gathered by the Christians and deposited in this place.

Romanus a short time after retired into the forests of Mount Jura, between France and Switzerland, and fixed his abode at a place called Condate, at the conflux of the rivers Bienne and Aliere, where he found a spot of ground fit for culture, and some trees which furnished him with a kind of wild fruit. Here he spent his time praying, reading, and laboring for his subsistence.Lupicinus, his brother, came to him sometime after in company with others, who were followed by several more, drawn by the fame of the virtue and miracles of these two Saints. Their numbers increasing, they built several monasteries, and a nunnery called La Beaume, which no men were allowed ever to enter, and where St. Romanus chose his burial-place.The brothers governed the monks jointly and in great harmony, though Lupicinus was the more inclined to severity of the two. Lupicinus used no other bed than a chair or a hard board; never touched wine, and would scarcely ever suffer a drop either of oil or milk to be poured on his pottage. In summer his subsistence for many years was only hard bread moistened in cold water so that he could eat it with a spoon. His tunic was made of various skins of beasts sewn together,. with a cowl; he used wooden shoes, and wore no stockings unless when he was obliged to go out of the monastery.St. Romanus died about the year 460, and St. Lupicinus survived him almost twenty years.Things to Do: 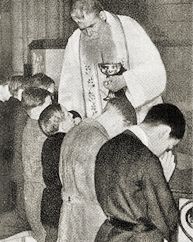 Blessed Daniel Brottier was a French Spiritan born in France in 1876 and ordained priest 1899. His zeal for spreading the Gospel beyond the classroom or the confines of France made him to join the Spiritan Congregation.

He was sent to Senegal, West Africa. After eight years there, his health suffered and he went back to France where he helped raise funds for the construction of a new cathedral in Senegal.At the outbreak of World War I Daniel became a volunteer chaplain. He attributed his survival on the front lines to the intercession of Saint Therese of Lisieux, and built a chapel for her at Auteuil when she was canonized.After the war he established a project for orphans and abandoned children "the Orphan Apprentices of Auteuil" in the suburb of Paris.He gave up his soul to God on the 28th of February, 1936 and was beatified only 48 years later in 1984 by Pope John Paul II.

--Excerpted from Evangelizo.orgThings to Do: