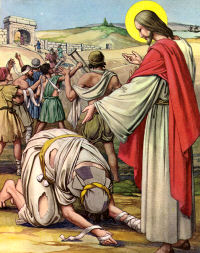 May your grace, O Lord, we pray, at all times go before us and follow after and make us always determined to carry out good works. Through our Lord Jesus Christ, your Son, who lives and reigns with you in the unity of the Holy Spirit, one God, for ever and ever.

On the way to Jerusalem Jesus was passing along between Samaria and Galilee. And as He entered a village, He was met by ten lepers, who stood at a distance and lifted up their voices and said, "Jesus, Master, have mercy on us." When He saw them He said to them, "Go and show yourselves to the priests (Lk 17:11-14)."

Sunday Readings
The first reading is taken from the second book of Kings 5:14-17. Elisha from Thisbe in Galaad is the first of the great prophets in Israel after the separation of Israel from Judah. He lived during the reign of King Achab (869-850), who married a daughter of the pagan king of Tyre. She introduced idolatry into Israel which Elisha fought fearlessly. He is credited with many miracles, one of which is related in today's reading.

The second reading is from the second letter of Paul to Timothy 2:8-13. In last Sunday's extract from this same reading, St. Paul exhorts his convert and disciple to be proud of the Gospel. He must guard the rich treasure of the faith he has received from Paul and hand it on to the next generation. Today, he reminds Timothy of the resurrection of Jesus, the crowning act of divine drama of our redemption.The Gospel is from St. Luke 17:11-19. The incident of the ten lepers happened as our Lord was on His way to Jerusalem, where He was to die on the cross so that we could live eternally. The Church brings it before our minds today, not so much to remind us of the mercy and kindness of Jesus to all classes, even the outcasts, as lepers were, as to make us see and be amazed at the depths of ingratitude to which men can sink.This is but one of many such examples of ingratitude that occurred during Christ's public ministry, most of those He miraculously cured forget to thank Him. In today's incident there was one, and he was the one least expected to do so, who had the decency to return and thank his benefactor. This pleased our Lord and led Him to remark on the ingratitude of the others. "Were not all ten made whole, where are the other nine?"He was surprised and also sad for their sakes, not for his own. They missed greater graces through this lack of appreciation and gratitude.All ten showed great faith and confidence in Jesus' power to heal. They had not heard Him preach nor had they seen any of His miracles. They lived in isolation camps, yet they believed the reports they had heard. They all were very obedient too. They set off for Jerusalem to carry out the command of Jesus, even though their leprosy had not yet left them.In all of this it was their own self-interest which came first in the minds of the nine Jews. Once they found their leprosy gone all they thought of was their own good fortune. Their Benefactor was quickly forgotten. The Samaritan's first thought, on the other hand, was of the one who had healed him. He was as delighted as the others with his cure but being generous and thoughtful for others, he felt it his bounden duty to return and thank the man who had done him this miraculous good turn.While we are ashamed of our fellowmen who were so ungrateful, and who treated the loving Jesus so shamefully, let us see if we have improved very much in our way of acting towards our Savior. Those Jewish lepers did not know that He was the Son of God who assumed human nature, became man, in order to raise us up to a new supernatural status. He gave them the gift of physical health for thirty, forty, or maybe sixty years more. We know that He has come to give us an eternal life — a life that will last forever, a life free from all troubles and worries "where all tears will be wiped away and death shall be no more."With this knowledge then of what Christ means to us, of what His Incarnation has won for us, of the eternal freedom from all sickness and death which His human life, death and resurrection have put at our disposal, how can any real Christian ever cease thanking Him, could there be such a being as an ungrateful Christian ever on earth?Unfortunately, there is not only one such ungrateful being, but there are millions of them. How many of us here present are numbered amongst these ungrateful ones? There are those of us who think of God only when we are in difficulties. While things are going well, when there is no sickness in the home, when our business is prospering, when there is peace all around us, how many times in the week do we say, "thank you, God, you are very good to me." When trouble strikes it is a different matter. We rush to church, we implore God to have pity on us, we make novenas to our special saints. This is not wrong. What is wrong, however, is that we forgot to thank God all the time that He was giving us spiritual and temporal favors.Think for a moment. If those nine ungrateful lepers were struck again with disease some months later and returned to implore Christ for a cure, would you blame Him if He refused? Most of us would refuse. Yet we expect Him to listen to our urgent pleas the minute we make them, while we have not given Him a thought and never said one "thank you, Lord; while things were going well with us.We all need to be more grateful to God every day of our lives—more grateful than we have been. He has not only given us life on this earth with its joys and its sorrows, but He has prepared for us a future life where there will be no admixture of sorrows. It is for that life that we are working. It is because there is a heaven after death that we are Christians. God has already done His part in preparing this heaven for us. He is assisting us daily to get there. We need a lot of that assistance and one of the surest ways of getting further benefits from God (as well as from men) is to show true gratitude for the benefits already received. — Excerpted from The Sunday Readings Cycle C, Fr. Kevin O' Sullivan, O.F.M.

Commentary on the Readings for the Eighteenth Sunday after Pentecost
"Jesus, seeing (the) faith (of those who brought the paralytic) said. . .'Take courage, son; thy sins are forgiven thee'" (Gospel).

We approach the end of the Church's year. We, too, have grown to maturity. In our youth we regarded perfection an easy accomplishment. Now we plead for Redemption. We implore Hi Mercy to direct our hearts (Prayer) in the evening of our life (Offertory).Our plea today is: Give peace, O Lord. What is the condition for peace with neighbor, peace amongst nations? It is a call to set ourselves right with God!Are we ambassadors of peace to others? The paralytic was unable to do anything for himself. Did not Jesus cure him, absolve him, only when his friends brought him and He saw their faith?Excerpted from My Sunday Missal, Confraternity of the Precious Blood
Stay in Touch!
Subscribe to Insights...free!
News, analysis & spirituality by email, twice-weekly from CatholicCulture.org.