Friday of the Seventh Week of Ordinary Time 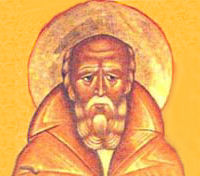 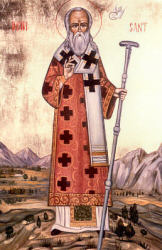 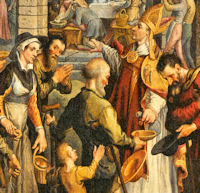 Albinus was born into an ancient and noble family in Brittany. He was a pious child and when he was still young he entered the monastery of Tintillant against the wishes of his parents. Albinus embraced the austerities of monastic life and accepted doing the most humble chores without complaining.

His burning desire was to live for Christ. Respected by the other monks for setting a good example and his devotion to prayer. Albinus was elected abbot when he was just 35. The monastery flourished under his modest Rule, and the monks at Tintillant were enriched by his wisdom. In 529, after serving 25 years as abbot, Albinus was named Bishop of Angers. Although his opinions were now sought by royalty, his manner remained unpretentious.As bishop, Albinus worked for the greater good of his people, instructing them in their faith. With the support of King Childebert, he convened two councils at Orleans that condemned the incestuous marriages of many powerful families. When his diocese was raided by pagan invaders and countless citizens were taken into slavery, Albinus made every effort to ransom them while giving generously to the sick and the poor.Many miracles were attributed to Albinus. According to one story, when he was unable to procure the release of some badly treated prisoners, he prayed in front of the prison until a landslide destroyed it, allowing the men to escape. They then reformed and became model Christians and citizens. After the death of Albinus, the abbey of St. Albinus was built over his grave at Angers and became a popular place of pilgrimage. Excerpted from "Ordinary People Extraordinary Lives"

Monday of the Second Week of Lent, Station with San Clemente (St. Clement):