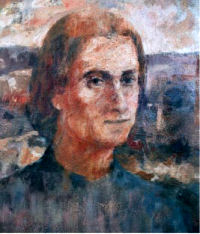 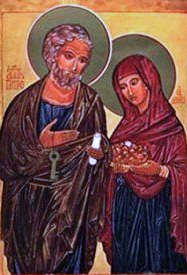 Aquila and Priscilla moved to the Greek city of Corinth, a cosmopolitan city where the cult of Aphrodite was very strong. There they met Paul, who was working as a tent-maker to provide for his necessities so as not to be a burden on anyone. After he was expelled from the synagogue, Paul established himself in the house of Titius Justus, near the home of Aquila and Pricilla. When Paul decided to return to Syria, the couple accompanied him on part of the journey but stopped at Ephesus.The three friends met again later in Ephesus, a meeting point of culture, religion, and commerce. In fact, St Paul founded a church there and lived there himself for two years. Although continuing to work as tent-makers, Priscilla and Aquila helped in the instruction of converts, most notably Apollos, an Alexandrian Jew who was well-versed in Scripture. Their catechetical instruction was made credible by their love for one another. Their home became a point of reference for the new Christian community, a domestic church, where followers of Christ met to listen to the Word of God and celebrate the Eucharist. St Paul remembered his time with Priscilla and Aquila who, he said “risked their necks for my life.”Aquila and Priscilla returned to Rome after the expulsion order against the Jews was lifted. Throughout their life they worked as missionaries, always bearing witness to the Risen Christ. Nothing is known of their deaths.Things to Do: