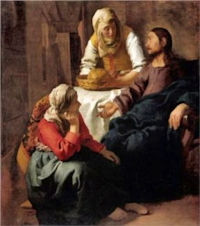 Almighty ever-living God, whose Son was pleased to be welcomed in Saint Martha's house as a guest, grant, we pray, that through her intercession, serving Christ faithfully in our brothers and sisters, we may merit to be received by you in the halls of heaven. Through our Lord Jesus Christ, your Son, who lives and reigns with you in the unity of the Holy Spirit, God, for ever and ever.

According to the 1962 Missal of St. John XXIII the Extraordinary Form of the Roman Rite, today is the feast of Sts. Felix, Simplicius, Faustinus & Beatrice. Pope Felix II was martyred in Tuscany, Italy, in the fourth century. The brothers Simplicius and Faustinus and their sister, Beatrice, gave their lives for Christ at Rome, A.D. 303.

St. Martha
Martha was active, enterprising, careful, and given to exterior things. Our Lord, Who loved her, says Saint John, does not, in the Gospel blame her for what she did for Him; He teaches her to place those 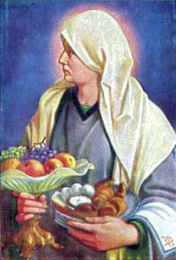 things which directly regard God and eternity above exterior works, and even in active labors, whether of obligation or of superogation, to avoid anxiety, precipitation and undertaking too much. These things would be detrimental both to interior piety and the good works themselves. Hence these words of Jesus which concern all souls, and will profit them until the end of time: “One thing only is necessary.” Martha, like a wise and prudent virgin, profited by the Divine lesson; peace grew in her soul without lessening her zeal. Exiled from Judea, thrust on board ship and miraculously guided to Provence, she was until the end, a model of the active life, as Mary was of the contemplative. Tarascon was especially privileged to behold and admire her virtues. Saint Maximin, Bishop of Aix, a disciple of Our Lord, came to see and console her at the hour of death, and received her last farewell for her beloved sister Mary. Numerous confraternities and different religious congregations have risen up under the patronage of Saint Martha, especially those following the mixed life (First Century).—Adapted from Saints and Saintly Dominicans, by Blessed Hyacinthe-Marie Cormier, O.P. 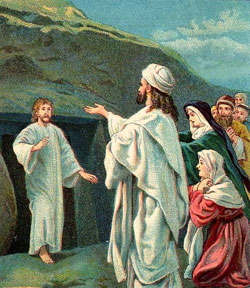 The account of Lazarus being raised from the dead by Jesus, led to his widespread veneration in Jerusalem, which was witnessed by the Spanish pilgrim Egeria in 390.

Nothing more is written about him in the New Testament. According to tradition however, the Jews of Jaffa placed Lazarus and his sisters in a leaky boat in which they somehow sailed safely to Cyprus. He said to have become a bishop on the island and died there peacefully 30 years later.Another legend tells how he was placed in a boat which did not have oars or a rudder. Nevertheless, together with his sisters, he landed safely in Gaul. That story claims he was martyred under Domitian and buried in a cave under the Abbey church in Marseilles.Tradition says Lazarus became a missionary to Gaul, the first bishop of Marseilles, France, and a martyr in the persecutions of Domitian.The Order of Lazarists founded by St Vincent de Paul took its name from the church in Paris dedicated to Saint Lazare.Chichester Cathedral has an 11th century sculpture depicting the Raising of Lazarus.—Excerpted from Independent Catholic News 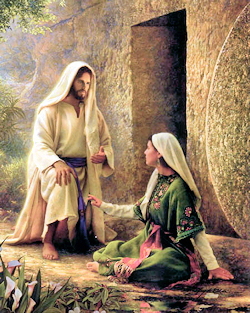 The great and holy myrrh-bearer Mary of Bethany is one of the women disciples of Jesus. She and her sister Martha are celebrated as saints on their shared feast day of June 4. They are also commemerated on the Third Sunday of Pascha or Sunday of Myrrh-bearing Women. Martha and Mary were believers in Christ even before Jesus Christ raised their brother St. Lazarus (October 17) from the dead. After the Ascension of our Lord and Savior Jesus Christ and the murder of the holy Archdeacon Stephen a persecution against the Church of Jerusalem broke out, and Righteous Lazarus was cast out of Jerusalem. The holy sisters then assisted their brother in the proclaiming of the Gospel in various lands. They reposed in Cyprus, where their brother became the first Bishop of Kition after his resurrection from the dead. We do not know how they died.

Keeping the various Marys of the Bible straight can be a challenge. For centuries, St. Mary of Bethany was considered by many to be the same as Mary Magdalene. Deeper study and consideration have prompted most now to consider them to be two separate women.Mary of Bethany was the sister of Martha and Lazarus of the town of Bethany, just a few miles away from Jerusalem. At some point, Jesus had developed a special friendship with these three siblings and had gone to their house for a visit. During the visit, Mary became engrossed in all Jesus had to say. She sat at his feet, listening attentively, apparently oblivious to her sister, Martha, who scurried about with serving duties. The frustrated Martha complained to Jesus that Mary was not being helpful. Profoundly, Jesus replied that it was Mary who had made the better choice — that spiritual matters have a much higher priority than household chores.

Later on, Mary’s brother Lazarus became deathly ill. Mary and her sister sent word to Jesus to let him know of Lazarus’s condition, hoping for a visit. Jesus did go to Bethany; however, he delayed the visit by two days, and by the time he arrived, Mary’s brother had been dead for four days.When Mary saw Jesus, she sorrowfully spoke of her disappointment, claiming that if he had been there, Lazarus could have been saved. Jesus then stunned Mary and her sister by going to the dead body of Lazarus, praying fervently to God, and then commanding the deceased man to rise. Mary’s confidence in Jesus surely soared as she witnessed her brother return to the living — still wrapped in his burial cloths!According to the Gospel of John, not long after Lazarus was raised from the dead, Jesus was again in Bethany. This time, Mary anointed Jesus’s feet with oil and then dried them with her hair. The Gospels of Matthew and Mark present similar stories, which many sources consider to be based on the same incident. However, the sinful woman in Luke’s seventh chapter who bathed Jesus’ feet with tears is considered to be a different person.—Excerpted from Saints, Feast, FamilyWhile Scripture scholars are now closer to separating Mary Magdalen from Mary of Bethany, the true identity of Mary, the sister of Martha is still not solidly known. See the feast of St. Mary Magdalene and from the Catholic Culture Library Who Really Was Mary Magdalene? by Father William Saunders for further explanation.St. Martha Patronage: Butlers; cooks; dietitians; domestic servants; homemakers; hotel-keepers; housemaids; housewives; innkeepers; laundry workers; maids; manservants; servants; servers; single laywomen; travellers. St. Lazarus Patronage: GravediggersSt. Martha Symbols: Water pot and asperge; cooking utensils; ladle or skimmer; broom; bunk of keys at her girdle; two asperges; dragon bound with a girdle (symbolizing temptation resisted); torch (symbolizing enlightenment and zeal); censer (symbolizing prayer and worship); boat; covered table with cloth, cups, pitcher and bowl containing fruit.Things to Do: 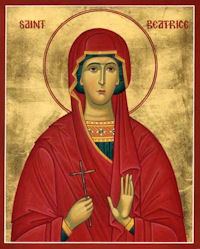 The persecution of Christians was raging. The two brothers Simplicius and Faustinus were cruelly tormented, and at length beheaded at Rome in the persecution of Diocletian, in the year 303. From the bridge called the pons aemilius, which spanned the Tiber River over Tiber Island, the bodies of the two brothers were tossed into the waters below. Their sister Beatrice took up their bodies out of the Tiber and gave them burial. She concealed herself for seven months in the house of a virtuous widow called Lucina, with whom she spent her time, night and day in fervent prayer, and in the exercise of other good works.It was not long before Beatrice met the same fate as her brothers. She was denounced as a Christian, imprisoned and, despite the threats she received, persevered in the faith. She was discovered and impeached by a pagan kinsman, who designed to possess himself of her estate, which was contiguous to his own; she resolutely protested to the judge that she would never adore gods of wood and stone, and was strangled by his order in prison the following night. Lucina buried her body near her brothers on the side of the highway to Porto, in the cemetery called Ad Ursum Pileatum. The catacomb called “Generosa” was on the via Portuense, and the three saints came to be known as the martyres portuenses. Of particular note in the catacomb is the fresco with Byzantine characteristics, which was discovered there, called Coronatio Martyrum, dating back to the 6th century. In it are depicted five characters: in the center Christ who offers the crown of martyrdom to Simplicius, flanked by Beatrice, while on the left are the figures of Faustinus, with the palm of martyrdom in his hand, and of Rufus. Later, the relics of Saint Beatrice and her brothers were brought to the Oratory of the Church of Saint Bibiana around 682 by Pope Leo II. Pope Urban VIII then later decided that the ancient church was to be restored by the hand of Bernini. The latter brought down the Oratory and the marble arch was carried to the Basilica of Saint Mary Major. Some of her relics are found in other parts of Europe, the most significant in Germany.—Adapted from Vatican NewsThings to Do: