Other Commemorations: St. Bertilla, Religious (RM); Feast of the Holy Relics Preserved in the Churches of the Diocese (Hist) 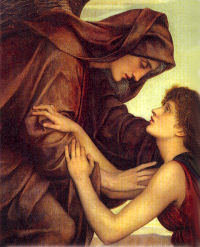 God shall wipe away all tears from the eyes of the Saints; and there shall be no more sorrow nor crying, neither shall there be any more pain; For the former things are passed away. They shall hunger no more, neither thirst any more: neither shall the sun light on them, nor any heat. For the former things are passed away (Rev. 21:4 and Rev. 7:16).

Since we are so closely associated with the Church Suffering in the communion of saints, fraternal charity demands that we pray fervently for those who have preceded us with the sign of faith and who rest in the sleep of peace. This thought is repeatedly inculcated in every Mass for the dead. 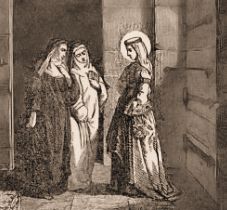 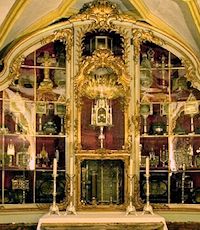 Although this is an historical feast and not on the General Roman Calendar or included in the Roman Martyrology, it is good to take time to examine how the Church venerates relics.

An object connected with a saint, e.g., part of the body or clothing or something the person and used or touched. Authentic relics are venerated with the Church's warm approbation. They may not be bought or sold. Those of a martyr are placed in the altar stone at the consecration of an altar. Relics are of three classes: the first is part of the saint's body and is the type placed in the altar stone; the second is part of the clothing or anything used during the saint's life; and the third is any other object, such as a piece of cloth, that has been touched to a first-class relic. (Etym. Latin religuiae, remains.)

From the Code of Canon Law:

From the Catechism of the Catholic Church:

Besides sacramental liturgy and sacramentals, catechesis must take into account the forms of piety and popular devotions among the faithful. The religious sense of the Christian people has always found expression in various forms of piety surrounding the Church's sacramental life, such as the veneration of relics, visits to sanctuaries, pilgrimages, processions, the stations of the cross, religious dances, the rosary, medals, etc. (CCC 1674).

From Directory on Popular Piety and the Liturgy: Principles and Guidelines:

The Relics of the Saints

236. The Second Vatican Council recalls that "the Saints have been traditionally honoured in the Church, and their authentic relics and images held in veneration". The term "relics of the Saints" principally signifies the bodies—or notable parts of the bodies—of the Saints who, as distinguished members of Christ's mystical Body and as Temples of the Holy Spirit (cf. 1 Cor 3, 16; 6, 19; 2 Cor 6, 16) in virtue of their heroic sanctity, now dwell in Heaven, but who once lived on earth. Objects which belonged to the Saints, such as personal objects, clothes and manuscripts are also considered relics, as are objects which have touched their bodies or tombs such as oils, cloths, and images.

237. The Missale Romanum reaffirms the validity "of placing the relics of the Saints under an altar that is to be dedicated, even when not those of the martyrs". This usage signifies that the sacrifice of the members has its origin in the Sacrifice of the altar, as well as symbolising the communion with the Sacrifice of Christ of the entire Church, which is called to witness, event to the point of death, fidelity to her Lord and Spouse.

Many popular usages have been associated with this eminently liturgical cultic expression. The faithful deeply revere the relics of the Saints. An adequate pastoral instruction of the faithful about the use of relics will not overlook:

Things To Do:
A Guide to Plenary Indulgences for the All Souls' "Octave", November 1-8
Visiting a Cemetery: An indulgence, applicable only to the Souls in Purgatory, is granted to the faithful, who devoutly visit a cemetery and pray, even if only mentally, for the departed. The indulgence is plenary each day from November 1-8; on other days of the year it is only a partial indulgence.