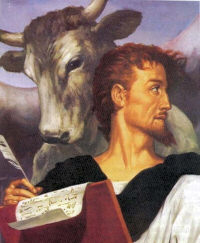 Father, you chose Luke the evangelist to reveal by preaching and writing the mystery of your love for the poor. Unite in one heart and spirit all who glory in your name, and let all nations come to see your salvation. Grant this through our Lord Jesus Christ, your Son, who lives and reigns with you and the Holy Spirit, God, for ever and ever. Amen. 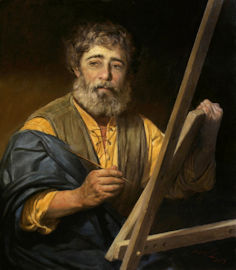 St. Luke came from Antioch, was a practicing physician when he was converted by St. Paul. He attached himself to the Apostle and accompanied him on most of his missionary journeys and was still with him in Rome when St. Paul was in prison awaiting death. We hear no more of him afterwards and nothing is known of his last years.

Because of his closeness with St. Paul, Luke acquired the information about the life of the early Christian communities which he recorded in the Acts of the Apostles from St. Paul's teaching and a study of all the traditionas of our Lord's life. Luke wrote the third Gospel, which St. Jerome called "Paul's Gospel." To St. Luke's Gospel we owe most of our knowledge of Christ's childhood and some precious details about our Lady. He also preserved some of the most touching of our Lord's parables, for example those of the lost sheep and the prodigal son. Dante styles him "The historican of Christ's meekness."Among the four animals of Ezechiel's vision, the ox represents St. Luke because the beginning of his Gospel mentions the priesthood of Zachary, and because oxen were sacrificed in the Old Law. The ox of Ezechiel's vision, taken by Christian art as a symbol of the third Evangelist, recalls for us the stable of Bethlehem and the details of he hidden life which Mary pondered in her heart and Luke reveals to us in his Gospel.St. Luke's Gospel is principally concerned with salvation and mercy; in it are preserved some of our Lord's most moving parables, like those of the lost sheep and the prodigal son. Dante calls St. Luke the "historian of the meekness of Christ." It is also St. Luke who tells us the greater part of what we know about our Lord's childhood. "According to tradition he was an artist, as well as a man of letters; and with a soul alive to all the most delicate inspirations, he consecrated his pencil to the holiest use, and handed down to us the features of the Mother of God. It was an illustration worthy of the Gospel which relates to the divine Infancy; and it won for the artist a new title to the gratitude of those who never saw Jesus and Mary in the flesh. Hence St. Luke is the patron of Christian art." St. Luke did not personally know our Lord, and like St. Mark, the author of the second Gospel, he is not included among the apostles. For this reason the Gospel chosen for their feast is the account of the sending forth of the seventy-two disciples. According to St. Jerome, St. Luke died in Achaia (Greece) at the age of 84, and it is unknown whether or not he died a martyr's death. His name means "bringer of light" (= luke).—Excerpted from The Liturgical Year, Abbot Gueranger O.S.B.Patron: Artists; bachelors; bookbinders; brewers; butchers; glassworkers; goldsmiths; lacemakers; notaries; painters; physicians; sculptors; stained glass workers; surgeons.Symbols: Winged ox; winged calf; ox; picture of the Virgin; palette and brushes; phials of medicine; physician's robes; easel; book and pen; hatchet; wooden horse; books of his Gospel and of the Acts; bishop; painting an icon of our Lady.Things to Do:

Peter, surnamed Alcantara after the town of his birth, was eminent among the saints of the sixteenth century for an extraordinary spirit of penance and for attaining the heights of contemplation. He was a great mystic. Born in 1499, at the age of sixteen he entered the Order of Friars Minor. He was an apostle of spiritual reform in his own community and aided St. Teresa in her reform of the Carmelites. God revealed to her that no one would remain unheard who begged in the name of Peter; thereafter she was most eager to have his prayers and honored him as a saint while he was still alive. With great humility Peter shunned all favors from eminent personages, even though they esteemed him as the mouthpiece of God or asked his counsel; for instance, he declined the request to act as confessor to Charles V. Although she was at quite a distance at the time of his death, St. Teresa saw his soul entering heaven. Later he appeared to her and said: "O happy penances which won for me such blessedness!"

—Excerpted from The Church's Year of Grace, Pius ParschPatron: Brazil (named by Pope Blessed Pius IX in 1862); Estremadura, Spain (named in 1962); watchmen.Symbols: Cross of twigs or boughs; ladder and star; dove; star.Things to Do: