Other Commemorations: St. Tarachus and his Companions, martyrs (RM); Divine Maternity of Our Lady (Hist) 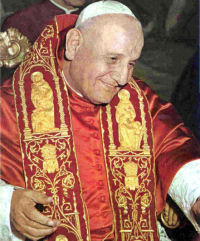 Lord, our help and guide, make your love the foundation of our lives. May our love for you express itself in our eagerness to do good for others. Grant this through our Lord Jesus Christ, your Son, who lives and reigns with you and the Holy Spirit, God, for ever and ever. Amen.

Today is the feast of Saint John XXIII, pope from 1958-1963, best known for convening the Second Vatican Council. He was beatified by Pope John Paul II on September 3, 2000. His feast is assigned to the day on which the first session of Vatican II opened in 1962. His feast is not on the General Roman Calendar, but can be celebrated locally.

According to the 1962 Missal of St. John XXIII the Extraordinary Form of the Roman Rite, today is the feast of the Motherhood of the Blessed Virgin Mary. The theological controversies regarding the divinity of Christ which disturbed the Church during the fourth and fifth centuries led to a denial of the divine maternity of Mary. The heretics refused to honor Mary as Mother of God. The Council of Ephesus in 431 declared that the Blessed Virgin "brought forth according to the flesh the Word of God made flesh" and that in consequence she is the Mother of God. Thus she is rightly given the title of divine maternity. In 1931, on the fifteenth centenary of this great Council, Pius XI instituted today's feast. By this act the pope wished to emphasize not only Mary's divine maternity, but also her motherhood of all the members of Christ's Mystical Body. 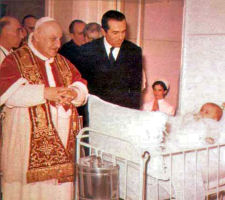 St. John XXIII was born Angelo Giuseppe Roncalli at Sotto il Monte, Italy, in the Diocese of Bergamo on 25 November 1881. He was the fourth in a family of 14. The family worked as sharecroppers. It was a patriarchal family in the sense that the families of two brothers lived together, headed by his great-uncle Zaverio, who had never married and whose wisdom guided the work and other business of the family. Zaverio was Angelo's godfather, and to him he always attributed his first and most fundamental religious education. The religious atmosphere of his family and the fervent life of the parish, under the guidance of Fr. Francesco Rebuzzini, provided him with training in the Christian life.

He entered the Bergamo seminary in 1892. Here he began the practice of making spiritual notes, which he continued in one form or another until his death, and which have been gathered together in the Journal of a Soul. Here he also began the deeply cherished practice of regular spiritual direction. In 1896 he was admitted to the Secular Franciscan Order by the spiritual director of the Bergamo seminary, Fr. Luigi Isacchi; he made a profession of its Rule of life on 23 May 1897. From 1901 to 1905 he was a student at the Pontifical Roman Seminary. On 10 August 1904 he was ordained a priest in the church of Santa Maria in Monte Santo in Rome's Piazza del Popolo. In 1905 he was appointed secretary to the new Bishop of Bergamo, Giacomo Maria Radini Tedeschi.When Italy went to war in 1915 he was drafted as a sergeant in the medical corps and became a chaplain to wounded soldiers. When the war ended, he opened a "Student House" for the spiritual needs of young people. In 1919 he was made spiritual director of the seminary, but in 1921 he was called to the service of the Holy See. Benedict XV brought him to Rome to be the Italian president of the Society for the Propagation of the Faith. In 1925 Pius XI named him Apostolic Visitator in Bulgaria, raising him to the episcopate with the titular Diocese of Areopolis. For his episcopal motto he chose Oboedientia et Pax, which became his guiding motto for the rest of his life. On 19 March 1925 he was ordained Bishop and left for Bulgaria. He was granted the title Apostolic Delegate and remained in Bulgaria until 1935, visiting Catholic communities and establishing relationships of respect and esteem with the other Christian communities.In 1935 he was named Apostolic Delegate in Turkey and Greece. His ministry among the Catholics was intense, and his respectful approach and dialogue with the worlds of Orthodoxy and Islam became a feature of his tenure. In December 1944 Pius XII appointed him Nuncio in France. 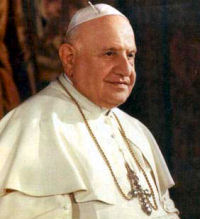 At the death of Pius XII he was elected Pope on 28 October 1958, taking the name John XXIII. His pontificate, which lasted less than five years, presented him to the entire world as an authentic image of the Good Shepherd. Meek and gentle, enterprising and courageous, simple and active, he carried out the Christian duties of the corporal and spiritual works of mercy: visiting the imprisoned and the sick, welcoming those of every nation and faith, bestowing on all his exquisite fatherly care. His social magisterium in the Encyclicals Pacem in terris and Mater et Magistra was deeply appreciated. He convoked the Roman Synod, established the Commission for the Revision of the Code of Canon Law and summoned the Second Vatican Council. The faithful saw in him a reflection of the goodness of God and called him "the good Pope." He was sustained by a profound spirit of prayer. He launched an extensive renewal of the Church, while radiating the peace of one who always trusted in the Lord. Pope John XXIII died on the evening of 3 June 1963, in a spirit of profound trust in Jesus and of longing for his embrace. —Taken from L'Osservatore Romano, September 6, 2000. (For complete text, see the Catholic Culture Library.Things to Do:

In an encyclical Pius XI, moreover, underscored the principal teachings of the General Council at Ephesus, developing in detail and with loving affection the singular privilege of divine Motherhood granted to the Blessed Virgin Mary. He believed that so sublime a mystery should ever become more firmly anchored in the hearts of the faithful. At the same time the Pope singled out Mary, the Mother of God and the one blessed among women together with the holy Family of Nazareth as the foremost model for the dignity and sanctity of chaste married life and for the religious education of youth. —Excerpted from The Church's Year of Grace, Pius ParschThings to do: 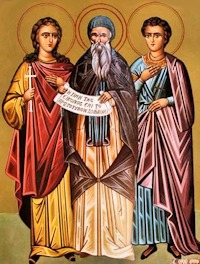 The governor, unable to shake their constancy, had them kept imprisoned that he might torture them further at the approaching games. They were borne to the amphitheatre, but the most ferocious animals, on being let loose on them, came crouching to their feet and licked their wounds. The judge, reproaching the jailers with connivance, ordered the martyrs to be dispatched by the gladiators.—Excerpted from The Lives of the Saints, by Alban Butler, Benziger Bros. ed. [1894]Things to Do:
Find us on Social Media.