Memorial of Saint Ignatius of Antioch, bishop and martyr 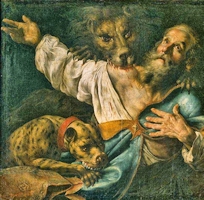 All-powerful and ever-living God, you ennoble your Church with the heroic witness of all who give their lives for Christ. Grant that the victory of Saint Ignatius of Antioch may bring us your constant help as it brought him eternal glory. We ask this through our Lord Jesus Christ, your Son, who lives and reigns with you and the Holy Spirit, one God, for ever and ever. Amen.

St. Ignatius is one of the great bishops of the early Church. He was the successor of St. Peter as Bishop of Antioch. He was condemned to death by wild beasts during the Emperor Trajan's persecution. On his way to Rome, he wrote seven magnificent letters, which we still have today, concerning the Person of Christ, his love for Christ, his desire for martyrdom and on the constitution of the Church and Christian life. His sentiments before his approaching martyrdom are summed in his word in the Communion antiphon, "I am the wheat of Christ, ground by the teeth of beasts to become pure bread."

Before the reform of the Roman Calendar in 1969, this was the memorial of St. Margaret Mary Alacoque, virgin. In the present calendar, her feast is an optional memorial celebrated on October 16. St. Ignatius feast was celebrated on February 1. 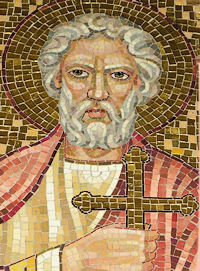 In the Martyrology we read: "At Rome, the holy bishop and martyr Ignatius. He was the second successor to the apostle Peter in the see of Antioch. In the persecution of Trajan he was condemned to the wild beasts and sent in chains to Rome. There, by the emperor's order, he was subjected to most cruel tortures in the presence of the Senate and then thrown to the lions. Torn to pieces by their teeth, he became a victim for Christ."

The bishop and martyr Ignatius occupies a foremost place among the heroes of Christian antiquity. His final journey from Antioch to Rome was like a nuptial procession and a Way of the Cross. For the letters he wrote along the way resemble seven stations of the Cross; they may also be called seven nuptial hymns overflowing with the saint's intense love for Christ Jesus and his longing to be united with Him. These letters are seven most precious jewels in the heirloom bequeathed to us by the Church of sub-apostolic times.The year of St. Ignatius' death is unknown; perhaps it occurred during the victory festivities in which the Emperor Trajan sacrificed the lives of 10,000 gladiators and 11,000 wild beasts for the amusement of the bloodthirsty populace. The scene of his glorious triumph and martyrdom was most likely the Colosseum; that mammoth structure, glittering with gold and marble, had then been just completed. "From Syria to Rome I must do battle with beasts on land and sea. For day and night I am chained to ten leopards, that is, the soldiers who guard me and grow more ferocious the better they are treated. Their mistreatment is good instruction for me, yet am I still far from justified. Oh, that I may meet the wild beasts now kept in readiness for me. I shall implore them to give me death promptly and to hasten my departure. I shall invite them to devour me so that they will not leave my body unharmed as already has happened to other witnesses. If they refuse to pounce upon me, I shall impel them to eat me. My little children, forgive me these words. Surely I know what is good for me. From things visible I no longer desire anything; I want to find Jesus. Fire and cross, wild beasts, broken bones, lacerated members, a body wholly crushed, and Satan's every torment, let them all overwhelm me, if only I reach Christ."The saint, now condemned to fight the wild beasts, burned with desire for martyrdom. On hearing the roar of the lions he cried out: "I am a kernel of wheat for Christ. I must be ground by the teeth of beasts to be found bread (of Christ) wholly pure".Excerpted from The Church's Year of Grace, Pius Parsch.Patron: Church in eastern Mediterranean; Church in North Africa; throat diseases. Symbols: Chains; lions; bishop surrounded by lions; heart with IHC; crucifix; heart.Things to Do: