Catholic Recipe: Speculaas or Speculatius I 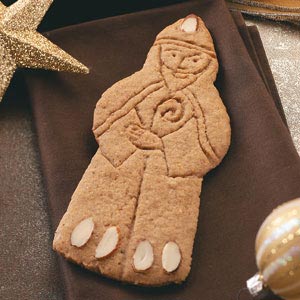 Saint Nicholas has been for hundreds of years a popular saint in the East and in the West, greatly famed as a worker of miracles. There are many charming legends concerning him. One tells of an occasion in heaven when all the saints came together to talk and to drink a little wine. Saint Basil filled the golden cups from the golden jug, and everyone was deep in conversation when it was noticed. That Saint Nicholas was nodding. One of the blessed nudged him until he awoke, and asked why he was slumbering in such good company.

"Well, you see," he told them, "the enemy has raised a fearful storm in the Aegean. My body was dozing perhaps, but my spirit was bringing the ships safe to shore."

Saint Nicholas is the saint of mariners and also of bankers, pawnbrokers, scholars, and thieves! But he is especially the saint of children, and is known among them in various countries as Santa Claus, Kris Kringle, Pelznickel. There have even been invented servants to accompany him and to deal with the children who have been bad. Saint Nicholas is considered too kind to give scoldings and punishments, so, in Austria Krampus, in Germany Knecht Rupprecht, and in Holland Black Peter go along with him, armed with a stout switch, while Saint Nicholas himself simply gives and gives.

Another very old legend tells us of the saint's kindness to the three daughters of a poor nobleman. They were about to be sold into slavery, because they had no dowry, when Saint Nicholas stole to their home and on three nights in succession dropped a bag of gold down the chimney. This is said to explain why three balls are the pawnbrokers' sign and why the saint drops gifts for children down the chimney.

Devotion to Saint Nicholas began in Asia Minor, where he was a bishop, and it was brought to Russia by an emperor who was witness to some of his miraculous works. It spread through Lapland and into Scandinavia, to other European countries, and finally to America. Up to that time Saint Nicholas had been pictured as a lean and ascetic bishop. In America, he became fat and jolly, and his miter was turned into a winter cap, his vestments into a snow suit. But he has kept his reindeer from Lapland, his propensity for chimneys acquired in Asia Minor, and the generosity of his heart.

A French legend tells that long ago Our Lady gave Lorraine to Saint Nicholas as a reward for his kindness to the world. He is still the special patron of that province and on his eve children hang up their stocking, saying:

In Holland Saint Nicholas puts in an appearance on the eve of his feast. As the children sing, the door flies open and on the floor drop candies and nuts — right on a white sheet that has been spread out just in case. And after he has gone, there is hot punch and chocolate and boiled chestnuts served with butter and sugar. And in the morning, children find in the shoes they have set before the fire toys and many other good things — candy hearts and spice cakes, letterbankets, which were candies or cakes in the form of the child's initials, ginger cakes or taai-taai in patterns of birds and fish and the form of the saint himself. He also brings a hard cooky, called Speculaus.

This hard spice cookie is made for the feast of St. Nicholas in Holland. Traditionally, the dough was rolled into carved wooden speculaas molds.

Cream the butter and sugar, add the egg, and continue beating. Add the grated lemon rind and the flour sifted with the baking powder, cinnamon, and salt. Let the dough rest overnight in a cool place. Roll out as thinly as possible — about the thickness of the back of a knife blade. Cut into desired shape and bake at 350° F. for fifteen to twenty minutes.