Monday of the Second Week in Ordinary Time 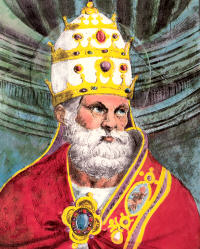 Alleluia Verse for Monday of the Second Week in Ordinary Time, Heb 4:12:

The word of God is living and effective, able to discern reflections and thoughts of the heart.

The Roman Martyrology commemorates Pope St. Marcellus I (d. 309), who was elected Pope in 308, just at the time when the Emperor Diocletian had spent somewhat his first violence against the Church. In Rome he reorganized the Catholic hierarchy disrupted by the persecution. He was exiled and put to labor. He is considered a martyr as he died in 309 because of his treatment during his exile.

St. Honoratus (350-429), is also commemorated today. Honoratus was born in Gaul (modern France) about 350, and came from a distinguished Roman family. After a pilgrimage to Greece and Rome, he became a hermit on the isle of Lerins, where he was joined by Sts. Lupus of Troyes (July 29), Eucherius of Lyons (November 16), and Hilary of Arles (May 5), among others. He worked against the Arian and Manichaean heresies, and re-established orthodoxy in the region. 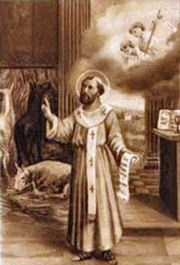 The new pope was confronted with enormous problems. His first challenge was to reorganize the badly shaken Church. He is said to have accomplished this by dividing Rome into twenty-five parishes, each with its own priest. The next task was more challenging. Once again a pope was faced with the problem of what to do with the many brethren who had compromised their faith during the reign of Diocletian. Marcellus upheld the doctrine of required penance before absolution. The apostates keenly desired readmission to communion, but they violently opposed the harshness of the penance demanded by the rigorist, Marcellus. Riots broke out throughout the city, and even bloodshed, to the point that Emperor Maxentius intervened. He believed that the pontiff was the root of the problem, and in the interest of peace, he banished Marcellus; the pope died a short time later. Apart from persecution, this was the first time that the secular government was known to have interfered with the Church. There is some confusion whether his body was brought back to Rome or whether he was allowed to return to the Holy See before his death. There is no doubt, however, that he was buried in the cemetery of Priscilla on the Via Salaria.

Symbols and Representation: Pope with a donkey or horse nearby; pope standing in a stable. 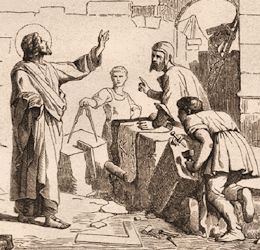 Venantius soon died happily at Methone, and Honoratus, being also sick, was obliged to return with his conductor. He first led a hermitical life in the mountains near Frejus. Two small islands lie in the sea near that coast; on the smaller, now known as St. Honoré, our Saint settled, and, being followed by others, he there founded the famous monastery of Lerins, about the year 400. Some of his followers he appointed to live in community; others, who seemed more perfect, in separate cells as anchorets. His rule was chiefly borrowed from that of St. Pachomius.

Nothing can be more amiable than the description St. Hilary has given of the excellent virtues of this company of saints, especially of the charity, concord, humility, compunction, and devotion which reigned among them under the conduct of our holy abbot.

He was, by compulsion, consecrated Archbishop of Arles in 426, and died, exhausted with austerities and apostolical labors, in 429.

Symbols and Representation: bishop drawing water from a rock with his mitre nearby; bishop on Lérins with a phoenix nearby; driving snakes from Lérins; overseeing the construction of the abbey at Lérins

Patronage: against drought; against misfortune; against rain; for rain