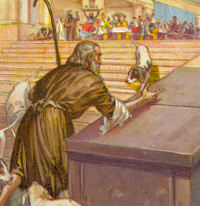 Twenty-Sixth Sunday in Ordinary Time: O God, who manifest your almighty power above all by pardoning and showing mercy, bestow, we pray, your grace abundantly upon us and make those hastening to attain your promises heirs to the treasures of heaven. Through our Lord Jesus Christ, your Son, who lives and reigns with you in the unity of the Holy Spirit, God, for ever and ever.

All that you have done to us, O Lord, you have done with true judgment, for we have sinned against you and not obeyed your commandments. But give glory to your name and deal with us according to the bounty of your mercy.

Though our Lord Jesus Christ was rich, he became poor, so that by his poverty you might become rich.

Remember your word to your servant, O Lord, by which you have given me hope. This is my comfort when I am brought low.

By this we came to know the love of God: that Christ laid down his life for us; so we ought to lay down our lives for one another.

Sunday Readings, Year C:
The First Reading is taken from the Prophet Amos 6:1a, 4-7. This warning of the prophet Amos, who was only an uneducated shepherd before God called him to the prophetic ministry, does not come from Amos but from God, in whose name he spoke. God's Chosen People, to whom he had in his goodness given the land of Canaan to be their homeland for all time, were about to lose their land and their freedom, because they had forgotten their divine Benefactor and thought only of themselves and their own comfort.

The Second Reading is from the First Letter of St. Paul to Timothy 6:11-16. In these verses St. Paul is exhorting Timothy to strive to become daily more perfect in his observance of the Christian faith. He had made a public and noble profession of that faith on the occasion of his baptism as a young man. He must continue to profess it.The Gospel is from St. Luke 16:19-31. We have here a story of two men whose states, both in this life and in the next, are dramatically opposed. The rich man had everything a man could desire on this earth and he set his heart on this wealth, to such a degree that he excluded all thought of God or of what followed after death. It was not that he was ignorant of God or of a future life (our Lord was addressing the parable to the Pharisees); he admits that he had Moses and the prophets, but he paid no heed to them. He was too busy trying to squeeze the last ounce of pleasure out of his few years on earth. On the other half of the picture we have a beggar, a man not only in dire destitution, but suffering bodily pains as well. He bore his lot patiently. He was quite content if he got the crumbs that fell from the rich man's table, which he probably did not always get. He must have been disappointed that this rich man never thought of giving him a helping hand but there is no mention of his ever criticizing or blaming him. He left these things to God. 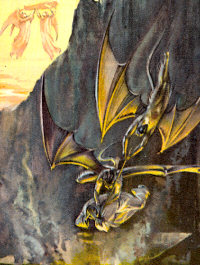 Both men die eventually. The beggar goes straight to heaven to a state of endless happiness. His bodily sufferings have ended forever, he will never be in want again. The rich man fares very differently. His enjoyments are over forever. He is now in torments and he is told that he can expect no relief. They will have no end. Abraham tells him why he is in his present state: he abused his time on earth. He sees the truth of this. He knows that he has no one to blame but himself which must add greatly to his torments. It is also a cause of additional grief to him that his bad example will lead his brothers (his fellowmen) to a like fate.All the parables of our Lord are based on everyday happenings. While we hope and pray that the case of the rich man described here is not an everyday occurrence, we cannot doubt but that such cases have happened and will happen again. This rich man is not in eternal torments because he was rich and even very rich. He is in eternal torments because he let his wealth become his master and forgot God and his neighbor and his own real welfare—eternal life. There are men like him in our world today, men who completely ignore their real future. While they are convinced that their stay on this earth is of very short duration and that they will have to leave it very, very soon, they still act and live as if they had a permanent home here.This is true not only of those who try (ineffectively most probably) to keep from their minds all thought of a future life, but even of some who openly profess to be Christians and who recite so often the words of the Creed: "I believe in the resurrection of the dead and the life of the world to come." Yet, they are so busy trying to get the wealth and the pleasures of this life, or to increase all they have of them already, that they haven't a moment to spare for the thing that really matters-their future unending life after death.God forbid that any of us should be numbered amongst these foolish people, for there is no greater folly on earth than to miss the real and only purpose in life because of a few trivial, passing attractions. We are not forbidden to have some of this world's goods. We need some, and God it was who provided them for our use. But we must use them properly and we must not set them up as idols to be adored. On all sides of us there are Lazaruses placed at our gates by God to give us an opportunity to exercise fraternal charity. Be a true brother to them now and you will not have to envy them hereafter.If on the other hand your lot is that of a Lazarus—and many there are whose life is one long, continual struggle against poverty, disease and hardship—try to carry your cross patiently. Envy of your neighbor and rebellion against God will only add to, and do not cure, your ills. The day of judgment, which for you will be the day of reward, if you are humble and patient, is around the comer. Eternal happiness is worth twenty lives of earthly ill-fortune.—Excerpted from The Sunday Readings Cycle C, Fr. Kevin O' Sullivan, O.F.M.