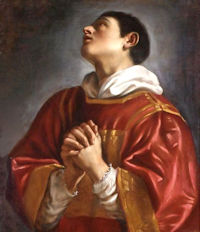 Feast of St. Lawrence: O God, giver of that ardor of love for you by which Saint Lawrence was outstandingly faithful in service and glorious in martyrdom, grant that we may love what he loved and put into practice what he taught. Through our Lord Jesus Christ, your Son, who lives and reigns with you in the unity of the Holy Spirit, God, for ever and ever.

This is the blessed Lawrence, who gave himself up for the treasure of the Church: for this he earned the suffering of martyrdom to ascend with joy to the Lord Jesus Christ.

Saint Lawrence was chief among the seven deacons who served the Roman Church during the mid-third century. The young cleric held a position of great trust, caring for the goods of the Church and distributing its alms among the poor. He was arrested under the Emperor Valerian in 258, laid upon a gridiron and slowly roasted to death. Lawrence rejoiced in his gruesome martyrdom and died praying for the conversion of the city of Rome, in the hope that from it the faith of Christ might spread throughout the world. From that time idolatry began to decline in Rome. 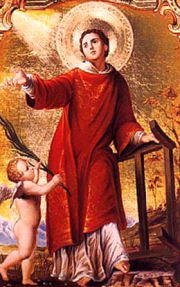 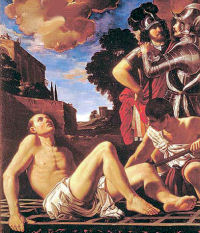 Lawrence was tortured, scourged, and scorched with glowing plates. In the midst of excruciating pain he prayed: "Lord Jesus Christ, God from God, have mercy on Your servant!" And he besought the grace of faith for the bystanders. At a certain point the soldier Romanus exclaimed: "I see before you an incomparably beautiful youth. Hasten and baptize me." He had observed how an angel dried the wounds of Lawrence with a linen cloth during his passion. Again during the night he was dragged before the judge and threatened with immediate death. But he replied: "My God I honor and Him alone I serve. Therefore I do not fear your torments; this night shall become as brightest day and as light without any darkness." When placed upon the glowing gridiron, he jested with his executioners and the cruel tyrant. "Now you may turn me over, my body is roasted enough on this side." Shortly after this had been done, he cried again: "At last I am finished; you may now take from me and eat." Then turning to God in prayer: "I thank You, O Lord, that I am permitted to enter Your portals." To comfort him during his torments God said to him: "My servant, do not be afraid. I am with you." He was put to death upon the Viminal Hill and buried on the Tiburtinian Way. Such the passion and death of this Christian hero, a story that in the Roman Breviary is told by the antiphons and responsories. Already in Constantine's time there was erected over his grave a church that belonged to the seven major basilicas of Rome, St. Lawrence Outside the Walls. —Excerpted from The Church's Year of Grace, Pius ParschPatron: Archives; archivists; armories; armourers; brewers; butchers; Ceylon; comedians; comediennes; comics; confectioners; cooks; cutlers; deacons; fire; glaziers; laundry workers; librarians; libraries; lumbago; paupers; poor people; restauranteurs; Rome; schoolchildren; seminarians; Sri Lanka; stained glass workers; students; tanners; vine growers; vintners; wine makers.Symbols: Dalmatic; thurible; gridiron, dish or money; palm and crucifix; censer; processional cross; cross and book of Gospels; money purse.
Often Portrayed As: Deacon holding a gridiron; deacon holding a book; deacon holding a bag of money.Things to Do: