From the Archives: This post was originally published in 2016.

August 10 marks the Feast of St. Lawrence (Laurence) of Rome, deacon and martyr, known for his charity for the sick, poor and abandoned. Under the persecution of Emperor Valerian he was grilled to death on a gridiron in 258.

St. Lawrence and St. Stephen are the two deacons included in the short list of twenty-seven feast days throughout the Liturgical Year. (I included a list of all the feasts in my post about St. Mary Magdalene’s new feast day.)

Devotion to St. Lawrence began immediately after his death and endured through the centuries. In the Rome area alone there are over seven churches dedicated to St. Lawrence, with multiple chapels and altars also named after this saint throughout the city. His life and death are depicted often in art.

What made this saint so popular? There are no firm historical details of his life and death, but what has passed on in tradition has endured, exposing a likable, friendly and charitable deacon with a sense of humor. He’s the friend everyone wants, and the saint everyone wants to imitate.

Humor facing adversity, is that why we love Lawrence so much? His humanity and strength shines through and he doesn’t come across just as a plaster saint.

Applying His Example at Home 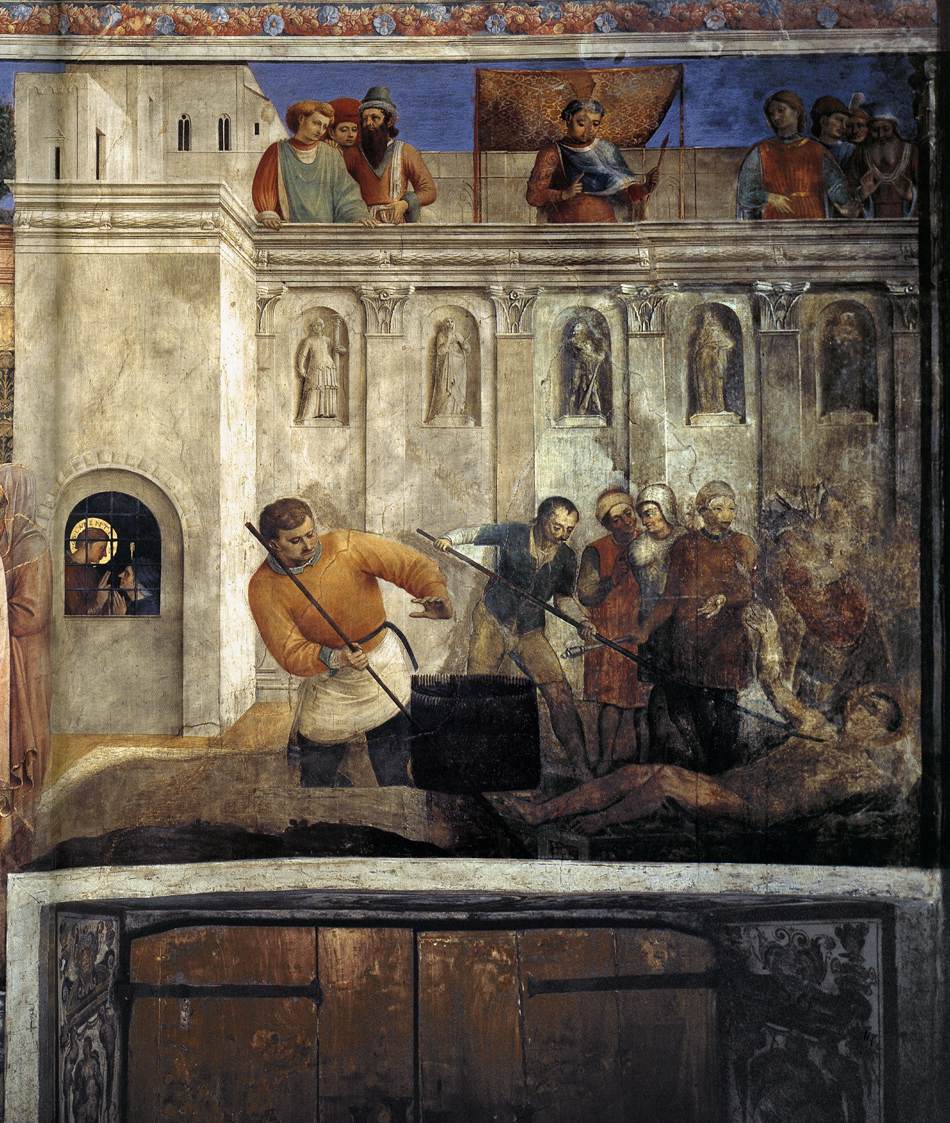 When we celebrate saints’ days in our domestic church, we try to talk about the saint’s life and example with my sons. The annual cycle repeats, so each year we add a little bit more to our observation and discussion. One thing in particular we note is St. Lawrence’s role as deacon ministering to the physical needs of the faithful is a perfect role model of living the Corporal and Spiritual Works of Mercy. He courageously lived his faith, even when he knew he faced certain persecution and death.

To feed the hungry;
To give drink to the thirsty;
To clothe the naked;
To shelter the homeless;
To visit the sick;
To visit the imprisoned;
To bury the dead. 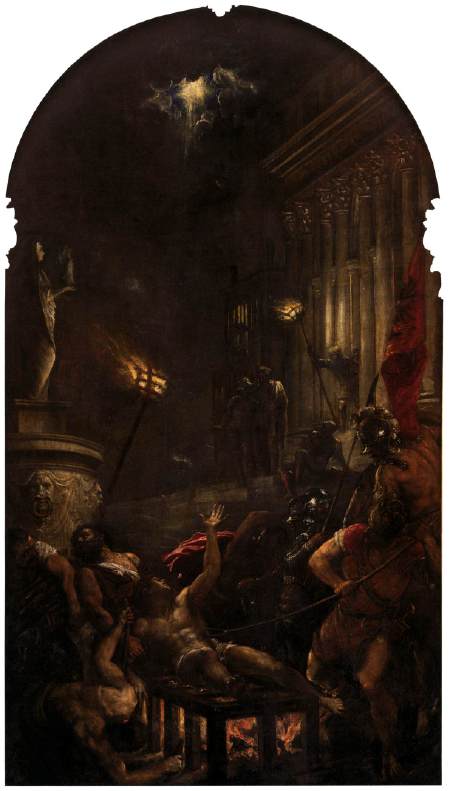 We try to discuss different opportunities to practice these works of mercy in imitation of St. Lawrence. We have ample ways within our extended family and church and school community and always on the lookout for more tangible ways.

A Picture Paints a Thousand Words

Over the years, I’ve found that beautiful art speaks volumes, not just for me but for my children. I don’t need to have huge discussions when we study the rich and symbolic art depicting the saints. This is particularly true when a child cannot read. Art can speak to the soul, and relate messages that I could never accomplish through any amount of talking. Art can sear visual images in the brain, making it easier to recall facts and other memories.

Without words or books, beautiful art can teach a lesson. That was the purpose of frescoes and stained glass windows throughout Church history—to relate a story, a lesson, an article of the faith just through the image.

All these artistic renderings of St. Lawrence make him more real and imitable. 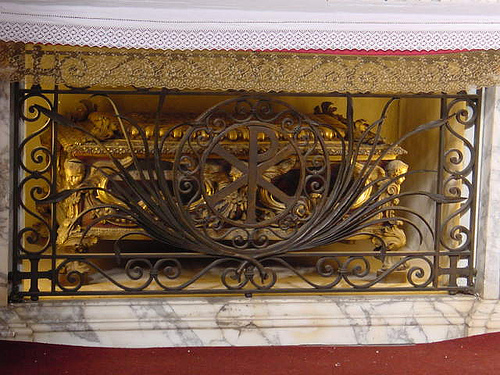 The human appeal of St. Lawrence comes through in his patronage. The list is very long, and includes vintners, brewers, butchers, chefs, confectioners and cooks, the occupations that feed the universal man: eating and drinking. He is the perfect saint for mothers, being patron of, cooks, laundry workers, and librarians, covering quite a few of the hats a mother wears. Being patron of students, he’s one that both children and parents can implore!

The connection with the wine growing and making has to do with the legend that St. Lawrence had the Holy Grail (as one of the treasures of the Church) and entrusted it to his parents in Spain. (Ignatius Press published a book in 2008 uncovering more of this tradition, St. Laurence and the Holy Grail by Janice Bennett.) The tie with wine also comes from the timing of his feast day, since it falls near the harvest of grapes. Just a few days’ ago we had the blessing of grapes on the Feast of the Transfiguration, the first of a few harvest feasts. 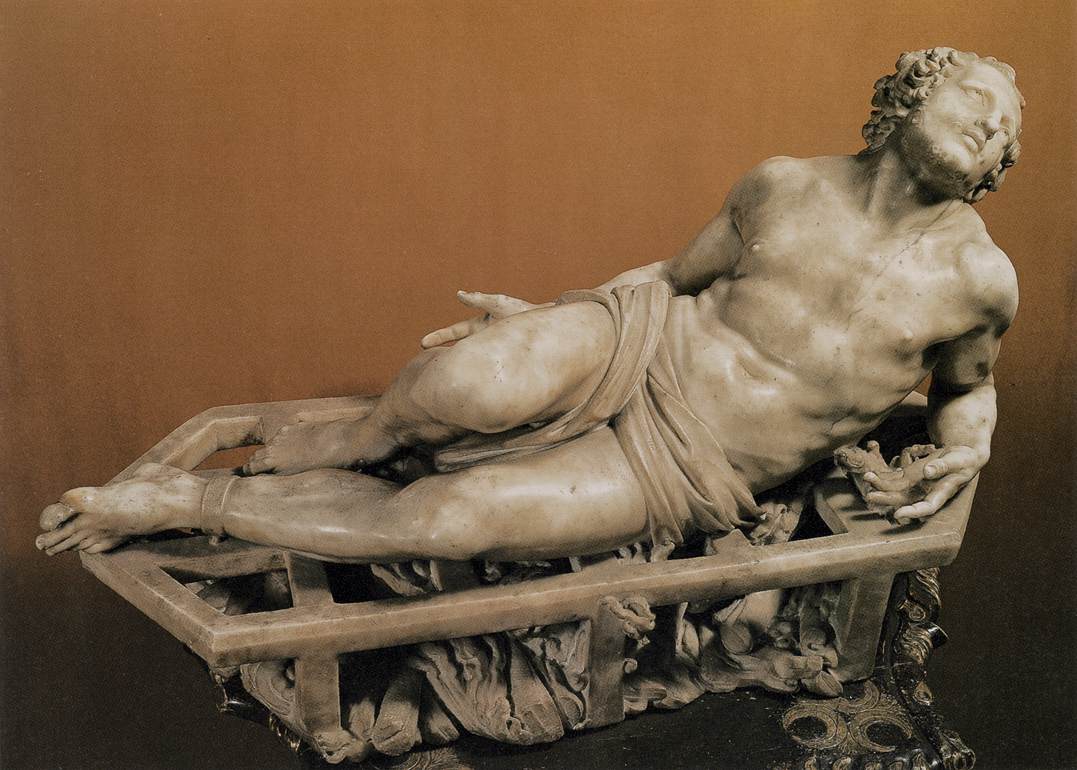 The way St. Lawrence died on a gridiron brings in the food connection. Perhaps it’s a little macabre, but we continually find our Catholic sense of humor laughs at death because we know this isn’t our final resting place. I do have a hard time visualizing the actual gridiron that was used. There is a part of kept in San Lorenzo in Lucina, Rome, but there is no detail in photos, leaving me to use my imagination.

The menu bar for today’s feast lists many different recipes. There are two schools of thought for cooking today: stay away from all hot foods, or incorporate foods that remind us his fiery death by grilling or food with gridiron marks such as waffles, pizzelles, grilled meat, etc.

And being patron of brewers and vintners, a toast to St. Lawrence over a cold beer or nice glass of wine is quite fitting.

Although St. Lawrence lived and died during the life of the early Church, almost 2000 years ago, his universal human appeal by his life’s example shines through the ages. St. Lawrence, Deacon and Martyr, pray for us in our daily work!