Saturday within the Octave of Easter 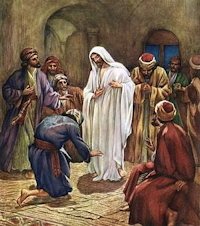 This is the day the LORD has made; let us be glad and rejoice in it.

Lastly, He showed himself to the Eleven themselves while they were at table. He reproached them for their incredulity and obstinacy.... And He said to them, "Go out to the whole world; proclaim the Good News to all creation."

On coming out of the baptismal font on Easter Sunday, the neophytes (newly baptized) were given a white symbolic garment, which they wore throughout the Easter Octave. Easter Saturday was known as "the Saturday on which white vestments are laid aside," or Saturday "in albis (depositis)" or "White Saturday." It was also called "Low Saturday." The octave ends tomorrow, but the Easter Season continues for six more weeks.