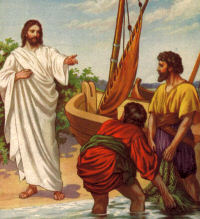 The Third Sunday of Ordinary Time has been designated as the "Sunday of the Word of God" (the Sunday usually falls between January 21-27). See Apostolic Letter Aperuit illis which instituted this observation, and the USCCB page with ideas for Catechetical, Ecumenical, Liturgical and Prayer Material.

As he passed by the Sea of Galilee, he saw Simon and his brother Andrew casting their nets into the sea; they were fishermen. Jesus said to them, "Come after me, and I will make you fishers of men." Then they abandoned their nets and followed him (Mark 1:16-19).The feast of St. Francis de Sales, which is ordinarily celebrated today, is superseded by the Sunday liturgy.Click here for commentary on the readings in the Extraordinary Form of the Roman Rite.The first reading is taken from the Book of the Prophet Jonah 3:1-5, 10 and tells the story of Jonah's call from God to go to a pagan city and preach repentance to the sinful people there.The second reading is from the first Letter of St. Paul to the Corinthians. St. Paul admonishes his converts to do what our Lord himself advised his follower—always to be ready for the judgment.The Gospel is from Mark 1:14-20. Jesus came to announce to all men the good news of God's eternal plan for them. He spent his public life convincing the Jews of Palestine of the truth of this message, and he died on the cross because he claimed to be that he was God's divine Son, who had come in human nature to raise all men to the standing and status of adopted sons of God. That very death, cruel and unjust though it was, was part of the divine plan. He conquered death and was raised from the grave to prove that we too, if we accept his divine gospel and live by it, will be raised from the dead and reign with Christ in the kingdom of his Father forever. Christ preached this doctrine in Palestine. It is the doctrine for which he gave his human life and which he gave to his Apostles to hand down to all future generations. This is the self-same doctrine preached by Christ's Church to all men today. It is the good news of God's mercy and love toward us weak, mortal creatures. To some it seems too good to be true; it would indeed be so if God were a limited, finite being like us, but he is Being itself. He is without limit, his goodness and love are limitless as is his nature. What God can see in creatures has ever been a puzzle to thinking man. One of the psalm-writers said centuries ago: "What is man that you should spare a thought for him, the son of man that you should care for him" (Ps. 8 :4)? Many a saint too, has repeated this remark ever since. We cannot hope to fathom the mind of God, nor do we need to. He has gone to such a length as the humiliation of his divine Son in the incarnation in order to give us a new standing in relation to himself and a new mode of eternal living after death. We are still God's creatures, "the work of his hands," but through accepting Christ and his gospel—his message of divine truth—we are no longer mere mortals. We shall die, but death is the beginning of the true life which God has arranged for us. It is no wonder that St. Paul could cry out: "O death where is your victory, O death, where is your sting?" We Christians should be the happiest people on earth. We know why we are here, we know where we are going and we know how to get there. There are trials and troubles which beset us on our journey; there are rough parts of the road and weaknesses in our human nature which often lead us off the right road, but we are not left to our own human resources. We have help from above to strengthen and comfort us on our journey. We have divine aids in the Church which Christ set us and we have the guarantee of our Good Shepherd that he will keep us in his fold or bring us back should we foolishly wander from it (Jn. 10: 14; Lk. 1.5:4-7). We Christians can indeed be the happiest people on earth, if we live according to the divine good news revealed to us through Christ. "Repent and believe in the gospel," Christ told the people of Galilee. The same call goes out from our loving Savior to each of us today: repent—change your outlook on life— and see it as God sees it to be for us, a short journey toward heaven. If we really believe in the gospel of Christ, the revelation of God's plan for our eternal happiness, our earthly troubles will look small, our trials and temptations will appear to us as they really are—a means of earning the eternal victory. Christ, the innocent victim for our salvation, has gone before us, carrying his heavy cross; can we refuse to carry the relatively lighter cross which he places on our shoulders as our means of making atonement for our own failings and for those of our fellowmen? God forbid that we should! If we have failed in the past, let us repent today and show our belief in the truth of the Christian gospel, by living as true Christians who are on their way to heaven. — Excerpted from The Sunday Readings by Fr. Kevin O'Sullivan, O.F.M.