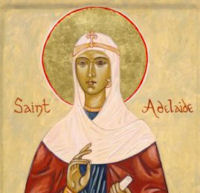 We are the blind offspring of the children of pitiful Eve
Bringing with us the shadows born of an age-old error.
But when God deigned to assume the mortal form
Of a human nature, then came forth from the Virgin
A world of salvation.... --Carmen 4, Sedulius

According to the 1962 Missal of St. John XXIII the Extraordinary Form of the Roman Rite, today is the feast of St. Eusebius which is celebrated in the Ordinary Form of the Roman Rite on August 2. Historically it is also the feast of St. Adelaide, daughter of the king of Burgundy. Throughout her life, she received strong support from the abbots of Cluny, with whom she was on terms of close friendship.

Excerpted from Panagia IconsPatron:Things to Do:

Today is Day One of the Christmas Novena