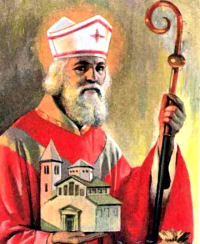 St. Ambrose (340-397) was born at Treves in Gaul, a territory which embraced modern France, Britain, Spain, and part of Africa. He studied in Rome and later became governor of Liguria and Aemelia with residence at Milan. While supervising the election of a new bishop of Milan in 374, he himself was suddenly acclaimed the bishop. He was only a catechumen at the time and was ordained a priest and consecrated a bishop on December 7. He wrote much on the Scriptures and Fathers, preached a homily every Sunday, resisted the interference of the secular powers with the rights of the Church, opposed the heretics, and was instrumental in bringing about the conversion of St. Augustine. He composed many hymns, promoted sacred chant, and took a great interest in the Liturgy.

Candid and fearless no matter how strong the opposition, Ambrose was directed to confront Maximus, the murderer of the Emperor Gratian. When Maximus refused to do penance, Ambrose excommunicated him. Later he denied Emperor Theodosius entrance into church for his massacre of the inhabitants of Thessalonica. It was on this occasion that allusion was made to [King] David as a murderer and adulterer, and Ambrose retorted: "You have followed him in sin, now follow him in repentance." Humbly, Theodosius accepted the penance imposed.We often meet this saint in the Divine Office as a teacher and as an inspired composer of hyms (fourteen of the hymns attributed to him are definitely authentic, true pearls of religious poetry). His writings are vibrant with ancient Christian liturgical spirit, for his life was wholly rooted in mystery and sacrament. We can profit greatly by reading Ambrose's works. He is one of the four great Latin Doctors of the Church. —Excerpted from The Church's Year of Grace, Pius ParschPatronage: bee keepers; bees; bishops; candle makers; chandlers; domestic animals; French Commissariat; geese; honey cake bakers; learning; livestock; police officers; schoolchildren; security personnel; starlings; students; wax melters; wax refiners; Italy: archdiocese of Milan; Alassio; Bologna; Carate Brianza; Lombardy; Lonate; Pozzolo; Milan; Monte San Savino; Stresa; Vigevano (from CatholicSaints.info)Symbols and Representation: baby with bees on his mouth; scourge, lash or whip, usually with 3 thongs representing doctrine of Trinity; bees; beehive; books; tower; dove; cope and mitre; human bones (referring to relics of Sts Gervase and Protase); scroll with staff of music; pen book and pen; cross; chalice; ox; knotted scourge; two scourges; goose; writing tablet and stylus; heart surmounted with flame; scroll with quotation from writings; bishop holding a church; man arguing with a pagan;
Often Portrayed As: Bishop holding a church in his hand; beehive; man arguing with a pagan; with Saint Gregory the Great, Saint Jerome and Saint Augustine of Hippo; at the grave of Saint Martin of Tours (Ambrose saw his burial in a vision); with Saint Protase and Saint Gervase (they appeared to Ambrose in a vision to lead him to their lost relics)Highlights and Things To Do: