Saturday of the Thirty-First Week of Ordinary Time 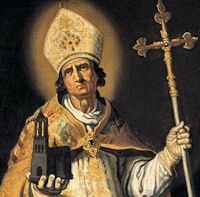 Historically today is the feast of St. Willibrord, apostle of Frisia and Archbishop of Utrecht and St. Engelbert, Archbishop of Cologne, Germany, slain by hired assassins and venerated as a martyr.This year, in the current circumstances due to the “Covid-19” pandemic, the Plenary Indulgences for the deceased faithful will be extended throughout the entire month of November, with an adaptation of works and conditions to guarantee the safety of the faithful.

St. Willibrord
Saint Willibrord was born in Northumberland (northeastern England) in 657. His father left the world to enter a monastery, and is honored as a Saint in the monastery of Echternach in the diocese of Treves, and named in the English calendar. When his son was twenty years old he was already wearing the religious habit. Being accustomed to bearing the yoke of the Lord, and finding it light and sweet, he went to Ireland to seek greater perfection and study under Saint Egbert.

When he was thirty years old he desired, with Saint Swidbert and ten other monks of England, to preach the faith in the land of the Frisons, or Vriesland, a province of the Low Countries surrounding the mouth of the Rhine. The Frisons were warriors and had maintained their liberty against the Romans. The Gospel had been preached among them in 678 by Saint Wilfrid, but those efforts had borne little fruit, and the true God was almost entirely unknown among them when the monks arrived.Willibrord afterwards went on to Rome to ask the papal benediction and authorization to preach the Gospel to the idolatrous nations; he was amply blessed with powers and relics for the churches he would construct. His companion, Saint Swidbert, became the bishop of a group residing near Cologne. The other eleven missionaries preached in the part of Vriesland belonging to the French. Saint Willibrord was recommended for episcopal consecration by Pepin, royal Palace Steward of France; Pope Sergius changed his name to Clement and consecrated him Archbishop of the Frisons in Saint Peter’s Church in Rome.He then returned to Utrecht, where he established his residence and built the Church of the Saviour. He repaired the Church of Saint Martin, which later became the Cathedral of Utrecht. He built and governed until his death the abbey of Echternach in Luxembourg. He baptized the son of Charles Martel, named Pepin, who later became king of France. Charles Martel was a benefactor of the churches founded by Saint Willibrord, and conferred on him sovereignty of the city of Utrecht.Saint Willibrord preached also in Denmark, where a cruel king reigned at that time; the Saint, seeing invincible obstacles to the propagation of the Gospel, merely bought thirty children of the land, whom he baptized and took back with him to Utrecht. He preached on the island of Walcheren, converted many and established several churches. A blow from a saber which an idolatrous priest gave him there made no wound; and the idolatrous priest became possessed by the demon.Saint Boniface joined him in 720 and spent three years with him before going to Germany. Saint Bede, English historian, wrote of Saint Willibrord, saying he was a venerable old man who had for thirty-six years been a bishop and was “awaiting the rewards of life in heaven, after the generous battles he waged in the spiritual combat.” At Utrecht Saint Willibrord founded schools which became famous. He wrought many miracles, and had the gift of prophecy. He labored unceasingly as bishop for more than fifty years, beloved alike of God and of man, and died full of days and good works. This amiable Saint, noted for his gaiety in conversation and his wisdom in counsel, was buried in the monastery of Echternach in Luxembourg.Excerpted from Les Petits Bollandistes: Vies des Saints, by Msgr. Paul Guérin (Bloud et Barral: Paris, 1882), Vol. 13; Little Pictorial Lives of the Saints, a compilation based on Butler’s Lives of the Saints and other sources by John Gilmary Shea (Benziger Brothers: New York, 1894).Things to Do: 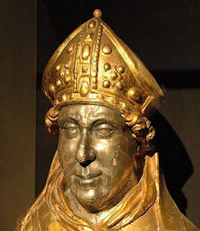 Archbishop of that city (1216-1225); b. at Berg, about 1185; d. near Schwelm, 7 November, 1225. His father was Engelbert, Count of Berg, his mother, Margaret, daughter of the Count of Gelderland. He studied at the cathedral school of Cologne and while still a boy was, according to an abuse of that time, made provost of the churches of St. George and St. Severin at Cologne, and of St. Mary's at Aachen. In 1199 he was elected provost of the cathedral at Cologne. He led a worldly life and in the conflict between Archbishops Adolf and Bruno sided with his cousin Adolf, and waged war for him. He was in consequence excommunicated by the pope together with his cousin and deposed in 1206. After his submission he was reinstated in 1208 and, to atone for his sin, joined the crusade against the Albigenses in 1212. On 29 Feb., 1216, the chapter of the cathedral elected him archbishop by a unanimous vote. In appearance he was tall and handsome. He possessed a penetrating mind and keen discernment, was kind and condescending and loved justice and peace, but he was also ambitious and self willed. His archiepiscopal see had passed through severe struggles and suffered heavily, and he worked strenuously to repair the damage and to restore order. He took care of its possessions and revenues and was on that account compelled to resort to arms. He defeated the Duke of Limburg and the Count of Cleves and defended against them also the countship of Berg, which he had inherited in 1218 on the death of his brother. He restrained the impetuous citizens of Cologne, broke the stubbornness of the nobility, and erected strongholds for the defence of his territories. He did not spare even his own relations when guilty. In this way he gained the universal veneration of his people and increased the number of his vassals from year to year. Although in exterior bearing a sovereign rather than a bishop, for which he was blamed by pious persons, he did not disregard his duties to the Church, but strove to uplift the religious life of his people. The mendicant orders which had been founded shortly before his accession, settled in cologne during his administration, the Franciscans in 1219, the Dominicans in 1221. He was well disposed towards the monasteries and insisted on strict religious observance in them. Ecclesiastical affairs were regulated in provincial synods. Blameless in his own life, he was a friend of the clergy and a helper of the poor.

In the affairs of the empire Engelbert exerted a strong influence. Emperor Frederick II, who had taken up his residence permanently in Sicily, gave Germany to his son, Henry VII, then still a minor, and in 1221 appointed Engelbert guardian of the king and administrator of the empire. When the young king reached the age of twelve he was crowned at Aachen, 8 May, 122, by Engelbert, who loved him as his own son and honoured him as his sovereign. He watched over the king's education and governed the empire in his name, careful above all to secure peace both within and without the realm. At the Diet of Nordhausen (24 Sept., 1223) he made an important treaty with Denmark; in the rupture between England and France he sided with England and broke off relations with France. The poet Walther von der Vogelweide extols him as "Master of sovereigns", and "True guardian of the king, thy exalted traits do honour to our emperor; chancellor whose like has never been".Engelbert's devotion to duty, and his obedience to the pope and to the emperor were eventually the cause of his ruin. Many of the nobility feared rather than loved him, and he was obliged to surround himself with a body-guard. The greatest danger threatened him from among his relations. His cousin, count Frederick of Isenberg, the secular administrator for the nuns of Essen, had grievously oppressed that abbey. Honorius III and the emperor urged Engelbert to protect the nuns in their rights. Frederick wished to forestall the archbishop, and his wife incited him to murder. Even his two brothers, the Bishops of Münster and Osnabrück, were suspected as privy to the matter. Engelbert was warned, commended himself to the protection of Divine Providence, and amid tears made a confession of his whole life to the Bishop of Minden. On 7 Nov., 1225, as he was journeying from Soest to Schwelm to consecrate a church, he was attacked on a dark evening by Frederick and his associates in a narrow defile, was wounded in the thigh, torn from his horse and killed. His body was covered with forty-seven wounds. It was placed on a dung-cart and brought to cologne on the fourth day. King Henry wept bitterly over the remains, put the murderer under the ban of the empire, and saw him broken on the wheel a year later at Cologne. He died contrite, having acknowledged and confessed his guilt. His associates also perished miserably within a short time. The crime, moreover, was disastrous for the German Empire, for the young king had now lost his best adviser and soon met a very sad fate, to the misfortune of his house and country.Engelbert, by his martyrdom made amends for his human weaknesses. His body was placed in the old cathedral of Cologne, 24 Feb., 1226, by Cardinal Conrad von Urach. The latter also declared him a martyr; a formal canonization did not take place. In 1618 Archbishop Ferdinand ordered that his feast be celebrated on 7 November and solemnly raised his remains in 1622. In the martyrology Engelbert is commemorated on 7 Nov., as a martyr. A convent for nuns was erected at the place of his death. By order of Engelbert's successor, Henry I, Cæsarius of Heisterbach, who possessed good information and a ready pen, wrote in 1226 the life of the saint in two books and added a third about his miracles (See Surius, "Vitæ Sanctorum", 7 Nov.)Excerpted from New Advent