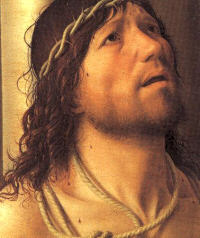 Like the Pharisees we are quick to condemn the faults of others, often as a means of justifying ourselves. We cannot expect Christ to approve self-righteous indignation at our neighbor's weakness. He gives us the example of prudent silence and the incontrovertible principle: "He that is without sin . . . let him first cast a stone." In the face of these words and the consciousness of our own sinfulness, do we dare to condemn another? We have need to remember that only God can read the heart of man and that He alone can judge the guilt or merit of an action.

Historically today is the feast of St. Benjamin a martyr of Persia (modern Iran), a deacon in the persecution conducted by the Sassanid rulers Yazdigerd I and his son Varahran. He was tortured and impaled.Stational Church

Meditation
As Jesus neared the end of His public life, the opposition of the Jewish leaders became more violent and their desire to kill Him more determined. Our Lord, however, continued to teach in the temple, where large crowds came to hear Him. The admiration of the people intensified the hatred of the priests, and they planned to ensnare Jesus in His speech that they might have grounds for condemnation. While His enemies plotted His downfall, Our Lord spent the night in prayer on the Mount of Olives.

The contrast between the character of Christ and that of His enemies could not be more pronounced. Yielding to base passion, they were openly seeking the death of the Messiah. Jesus, on the contrary, in the spirit of generous charity, was spending His days in teaching and His nights in prayer. Does our conduct in difficult circumstances resemble that of Christ? When we are unjustly accused, criticized, or condemned, do we calmly continue our work and have recourse to God in prayer? Perhaps we seek vengeance upon those who oppose us by wishing them evil or persuading others to despise and condemn them. Let us leave our reputation in the hands of God and imitate Christ's efforts to benefit those who hated and condemned Him."The Lord is the protector of my life: of whom shall I be afraid?"Excerpted from "Liturgical Reflections", Sisters of St. DominicThings to Do: 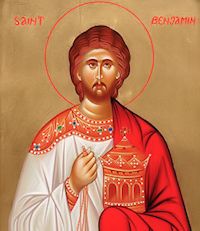 The Christians in Persia had enjoyed twelve years of peace during the reign of Isdegerd, son of Sapor III, when in 420 it was disturbed by the indiscreet zeal of Abdas, a Christian Bishop who burned the Temple of Fire, the great sanctuary of the Persians. King Isdegerd threatened to destroy all the churches of the Christians unless the Bishop would rebuild it.

As Abdas refused to comply, the threat was executed: the churches were demolished, Abdas himself was put to death, and a general persecution began which lasted forty years. Isdegerd died in 421, but his son and successor, Varanes, carried on the persecution with great fury. The Christians were submitted to the most cruel tortures.

Among those who suffered was St. Benjamin, a Deacon, who had been imprisoned a year for his Faith. At the end of this period, an ambassador of the Emperor of Constantinople obtained his release on condition that he would never speak to any of the courtiers about religion.

St. Benjamin, however, declared it was his duty to preach Christ and that he could not be silent. Although he had been liberated on the agreement made with the ambassador and the Persian authorities, he would not acquiesce in it, and neglected no opportunity of preaching. He was again apprehended and brought before the king. The tyrant ordered that reeds should be thrust in between his nails and his flesh and into all the tenderest parts of his body and then withdrawn. After this torture had been repeated several times, a knotted stake was inserted into his bowels to rend and tear him. The martyr expired in the most terrible agony about the year 424.

—Excerpted from Saints and Angels