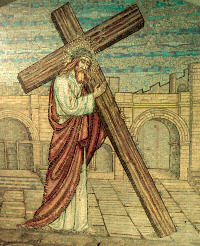 Grant, we pray, O Lord, that, schooled through Lenten observance and nourished by your word, through holy restraint we may be devoted to you with all our heart and be ever united in prayer. Through our Lord Jesus Christ, your Son, who lives and reigns with you in the unity of the Holy Spirit, one God, for ever and ever.

The Need for Mortification Today
Lent is essentially a time of prayer and mortification. The body which has been indulged for so many months must now be denied. Even though fasting and abstinence are impossible for some of us, the penitential spirit may not be shirked. Modern creeds approximate more and more the pagan conception of man, and the penitential spirit is, of course, unbearable to those whose only philosophy of life is the song of the banqueter: "Let us eat, drink and be merry, for tomorrow we die."

Modern civilization scoffs at the notion of doing penance as if it were a vice of the pietist who wants to exalt one side of his nature at the expense of the other, although it is no small thing that the soul should be king of the body. Penance has a deeper significance than that, as I have pointed out. But, says the modern scoffer, "a man is no better and no worse than God made him. God who gave him impulses cannot be angry if he obeys them. Let a man snatch the passing pleasure."In the Cathedral of Lubeck in Germany is a Lenten Monitory which may be taken as God's answer to such blasphemy:

Wednesday of the Third Week of Lent
Station at St. Sisto (San Sisto il vecchio):
This church was called "San Sisto il vecchio" because it is the oldest convent in Rome of the sons of the Saint of Callaroca. The current construction is quite recent; in fact it was built in 1700 by the Dominican Pope Benedict XIII (1724-1730). He certainly did it to honor the memory of the Founder of the Order, San Domenico, who had his first Roman residence here; Honorius III, after having approved the Order of Preachers, gave him this temple. Tradition has it that at this church Pope Sixtus II met with San Lorenzo to whom he predicted the martyrdom which, moreover, happened after three days.