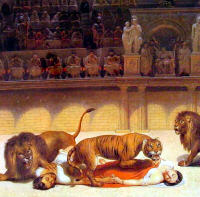 O God, who consecrated that abundant first fruits of the Roman Church by the blood of the Martyrs, grant, we pray, that with firm courage we may together draw strength from so great a struggle and ever rejoice at the triumph of faithful love. Through our Lord Jesus Christ, your Son, who lives and reigns with you in the unity of the Holy Spirit, one God, for ever and ever.