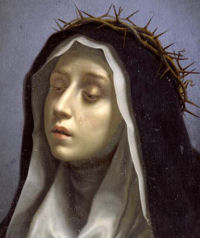 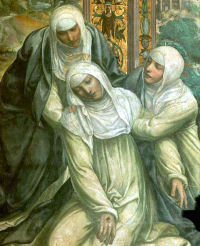 Unbelievable were her austerities, her miracles, her ecstasies. The reputation of her sanctity soon spread abroad; thousands came to see her, to be converted by her. The priests associated with her, having received extraordinary faculties of absolution, were unable to accommodate the crowds of penitents. She was a helper and a consoler in every need. As time went on, her influence reached out to secular and ecclesiastical matters. She made peace between worldly princes. The heads of Church and State bowed to her words. She weaned Italy away from an anti-pope, and made cardinals and princes promise allegiance to the rightful pontiff. She journeyed to Avignon and persuaded Pope Gregory XI to return to Rome. Even though she barely reached the age of thirty-three her accomplishments place her among the great women of the Middle Ages. The virgin Catherine was espoused to Christ by a precious nuptial ring which, although visible only to her, always remained on her finger.—Excerpted from The Church's Year of Grace, Pius ParschPatron: Against fire; bodily ills; Europe; fire prevention; firefighters; illness; Italy; miscarriages; nurses; nursing services; people ridiculed for their piety; sexual temptation; sick people; sickness; Siena, Italy; temptations.Symbols: Cross; heart; lily; ring; stigmata.Things to Do: 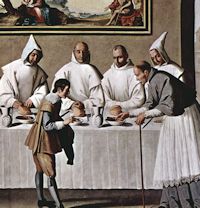 One day, hearing an account of the wonderful sanctity of the monks of Cluny, under St. Odilo, he was so moved that he set out that moment, and going thither, humbly begged the monastic habit. After a rigid novitiate, he made his profession in 1039, being sixteen years old. His extraordinary virtue, especially his admirable humility, obedience, charity, sweetness, prudence, and zeal, gained him the respect of the whole community; and upon the death of St. Odilo, in 1049, though only twenty-five years old, he succeeded to the government of that great abbey, which he held sixty-two years. He received to the religious profession Hugh, Duke of Burgundy, and died on the twenty-ninth of April, in 1109, aged eighty-five. He was canonized twelve years after his death by Pope Calixtus II.—Excerpted from Lives of the Saints, by Alban Butler, Benziger Bros. ed. 1894Things to Do: