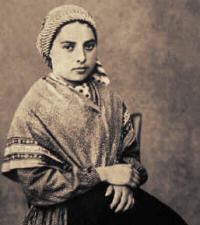 Although there are no saints on the Universal Calendar, today marks the historical feasts of St. Bernadette Soubirous and St. Benedict Joseph Labre.

Bernadette, the oldest of six children, was born in Lourdes, France, in 1844. At the age of 14, between 11 February 1858 and 16 July 1858, Bernadette had 18 visions of the Immaculate Conception in a local grotto near the bank of the River Gave, near Lourdes. During the visions, Mary requested prayer and penitence, asked for the construction of a new church, and led Bernadette to a fresh water spring believed to have miraculous healing powers. Despite strong doubt and even opposition from political and church officials, Bernadette's faith in what she had witnessed remained steadfast and humble. Saint Bernadette longed to become a Carmelite nun, but ill health prevented her from doing so. In 1866, she retreated from the public eye to the convent Notre Dame at Nevers where she remained until her death at the age of 35.

St. Benedict Joseph Labre was called the "Beggar of Rome" and was a pilgrim recluse. He was born in Amettes, France, on March 25, 1748, the eldest of eighteen children. He was devoted to the Blessed Sacrament and attended Forty Hours devotion in the city. He died in Rome on April 16.

St. Bernadette
Marie Bernarde ('Bernadette') Soubirous was the eldest child of an impoverished miller. At the age of fourteen she was ailing and undersized, sensitive and of pleasant disposition but accounted backward and slow. Between 11 February and 16 July 1858, in a shallow cave on the bank of the river Gave, she had a series of remarkable experiences. On eighteen occasions she saw a very young and beautiful lady, who made various requests and communications to her, pointing out a forgotten spring of water and enjoining prayer and penitence. The lady eventually identified herself as the Virgin Mary, under the title of 'the Immaculate Conception'. Some of these happenings took place in the presence of many people, but no one besides Bernadette claimed to see or hear 'the Lady', and there was no disorder or emotional extravagance. After the appearances ceased, however, there was an epidemic of false visionaries and morbid religiosity in the district, which increased the reserved attitude of the church authorities towards Bernadette's experiences. 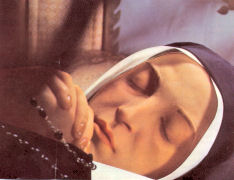 For some years she suffered greatly from the suspicious disbelief of some and the tactless enthusiasm and insensitive attentions of others; these trials she bore with impressive patience and dignity. In 1866 she was admitted to the convent of the Sisters of Charity at Nevers. Here she was more sheltered from trying publicity, but not from the 'stuffiness' of the convent superiors nor from the tightening grip of asthma. 'I am getting on with my job,' she would say. 'What is that?' someone asked. 'Being ill,' was the reply. Thus she lived out her self-effacing life, dying at the age of thirty-five. The events of 1858 resulted in Lourdes becoming one of the greatest pilgrim shrines in the history of Christendom. But St Bernadette took no part in these developments; nor was it for her visions that she was canonized, but for the humble simplicity and religious trustngness that characterized her whole life.Patron: Bodily ills; illness; Lourdes, France; people ridiculed for their piety; poverty; shepherdesses; shepherds; sick people; sickness.Symbols: Young girl kneeling in front of a grotto, before the Blessed Virgin ("The Immaculate Conception") who wears a white dress, blue belt, and a rose on each foot. Bernadette is sometimes pictured after she received the habit. 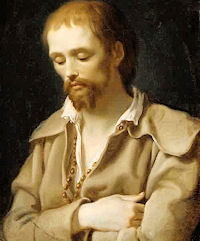 Saint Benedict Joseph Labre, born on March 26, 1748 in northern France, exemplifies a very particular kind of holiness found in both East and West. He was a wanderer who prayed ceaselessly, a pilgrim walking from one holy place to another, a fool for Christ.

As a young man, Benedict Joseph made a number of unsuccessful attempts at monastic life. He tried his vocation with the Trappists, with the Cistercians, and with the Carthusians, but, in every instance, after a few months or a few weeks, he was rejected as being unsuitable. Benedict Joseph was endearing in his own way. He was a gentle young man, tortured by scruples of conscience, and sensitive. He was completely honest, humble, candid, and open. He was cheerful. But, for all of that, he was a misfit. There was an oddness about him. He was drawn irresistibly to monastic life and, at the same time, rejected from every monastery in which he tried his vocation.When he was twenty-two years old, Benedict Joseph left the Abbey of Sept-Fons, still wearing his Cistercian novice's habit, with a rosary around his neck, and a knapsack on his back. His only possessions, apart from the clothes he wore, were his two precious rosaries, a New Testament, a Breviary for reciting the Divine Office, and The Imitation of Christ.Walking all the way to Rome, begging as he went, he became a consecrated vagabond, a pilgrim vowed to ceaseless prayer. He walked from one shrine to another, visiting the Holy House of Loreto, Assisi, Naples, and Bari in Italy. He made his way to Einsiedeln in Switzerland, to Paray-le-Monial in France, and to Compostela in Spain. He lived on whatever people would give him, and readily shared what little he had. He observed silence, praying constantly. He was mocked, abused, and treated like a madman. Cruel children pelted him with garbage and stones.After 1774, apart from an annual pilgrimage to the Madonna at the Holy House of Loreto, Benedict Joseph remained in the Eternal City. At night he would sleep in the Colosseum. During the day he would seek out those churches where the Forty Hours Devotion was being held, so as to be able to adore the Blessed Sacrament exposed. So striking was his love for the Blessed Sacrament that the Romans came to call him "the beggar of Perpetual Adoration." He was graced with a profound recollection in church. More than once he was observed in ecstasy, ravished into the love of God and shining with an unearthly light. It was on one of these occasions that the artist Antonio Cavallucci painted the beautiful portrait of Saint Benedict Joseph that allows us, even today, to see his handsome face illumined by union with God.On April 16, 1783 Benedict Joseph collapsed on the steps of the Church of Santa Maria dei Monti. It was the Wednesday of Holy Week. He was carried to a neighbouring house where he received the last sacraments, and died. He was thirty-five years old. No sooner did news of his death reach the streets than a huge throng gathered crying, "È morto il santo! -- The saint is dead!" Benedict Joseph was buried beneath the altar in a side chapel of Santa Maria dei Monti. I have gone there to pray, and knelt before the life-sized sculpture in marble that depicts him in the repose of a holy death.Benedict Joseph Labre was dead but a few months when more than 136 miraculous healings were attributed to his intercession. Present in Rome at the time of his funeral was an American Protestant clergyman from Boston, The Reverend John Thayer. The experience of Benedict Joseph's holy death converted Thayer. He was received into the Catholic Church, ordained to the priesthood, and died in Limerick, Ireland in 1815.Excerpted from Vultus Christi

St. Encratis or Engratia and the Eighteen Martyrs of Saragossa 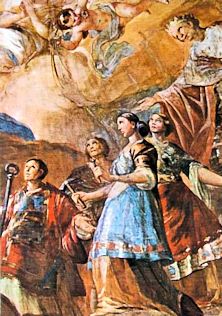 St. Optatus and seventeen other holy men received the crown of martyrdom on the same day, at Saragossa, under the cruel Governor Dacian, in the persecution of Diocletian, in 304. Two others, Caius and Crementius, died of their torments after a second conflict.

The Church also celebrates on this day the triumph of St. Encratis, or Engratia, Virgin. She was a native of Portugal. Her father had promised her in marriage to a man of quality in Roussillon; but fearing the dangers and despising the vanities of the world, and resolving to preserve her virginity, in order to appear more agreeable to her heavenly Spouse and serve Him without hindrance, she stole from her father's house and fled privately to Saragossa, where the persecution was hottest, under the eyes of Dacian. She even reproached him with his barbarities, upon which he ordered her to be long tormented in the most inhuman manner: her sides were torn with iron hooks, and one of her breasts was cut off, so that the inner parts of her chest were exposed to view, and part of her liver was pulled out. In this condition she was sent back to prison, being still alive, and died by the mortifying of her wounds, in 304.The relics of all these martyrs were found at Saragossa in 1389.Excerpted from the Lives of the Saints, by Alban Butler, Benziger Bros. ed. [1894]
Find us on Social Media.