Stir up in your Church, we pray, O Lord, the Spirit that filled Saint Josaphat as he laid down his life for the sheep, so that through his intercession we, too, may be strengthened by the same Spirit and not be afraid to lay down our life for others. Through our Lord Jesus Christ, your Son, who lives and reigns with you in the unity of the Holy Spirit, God, for ever and ever.

According to the 1962 Missal of St. John XXIII the Extraordinary Form of the Roman Rite, today is the feast of St. Martin I who was pope from 649 to 654. He was a courageous defender of the faith against heresy. He held a council at Rome which condemned the Monothelite heresy which taught that Christ had no human but only a divine will. The heretical emperor, Constans II, had him treacherously arrested and taken to Constantinople. After many sufferings and humiliations, he was exiled to Cherson in the Crimea where he died of exhaustion in 654. 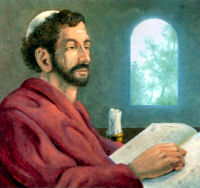