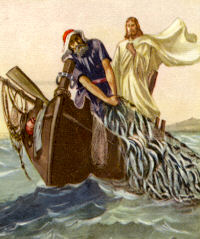 Commentary for the Readings in the Extraordinary Form:
Septuagesima Sunday

As athletes of Christ we are called to a competitive "race" (Epistle). As workers with Christ we are ordered into the "vineyard" (Gospel).It is a "race" with death for the "prize" of life eternal. Only "one receives the prize" by His own right, Christ! But, remember, He still runs in us if we do not lag in this "race," as did Israel under "Moses" (Epistle).God comes to us "early" in life. Unitl the last "hour" He repeats, "Why . . . stand . . . idle?" Each "hour" brings us nearer to the "evening" of reward, not due to the excellence of our work in itself but mercifully given by God as a recompense (Gospel).— Excerpted from My Sunday Missal, Confraternity of the Precious Blood
Find us on Social Media.