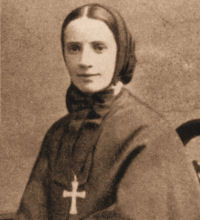 God our Father, you called Frances Xavier Cabrini from Italy to serve the immigrants of America. By her example teach us concern for the stranger, the sick, and the frustrated. By her prayers help us to see Christ in all the men and women we meet. Grant this through our Lord Jesus Christ, your Son, who lives and reigns with you and the Holy Spirit, God, for ever and ever. Amen.

According to the 1962 Missal of Bl. John XXIII the Extraordinary Form of the Roman Rite, today is the feast of St. Didacus, a humble Franciscan laybrother and the recipient of exceptional graces. He received such light from God that he spoke of heavenly things in a manner almost divine; certain miracles, but especially his obedience, charity and fervor of his prayer, caused him to be considered a saint wherever he went. He was born in Andalusia, was sent as a missionary to the Canary Isles, spent some time in Rome and returned to die in Spain. 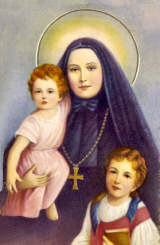 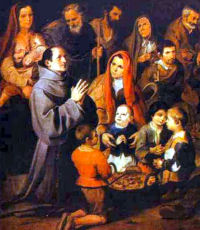 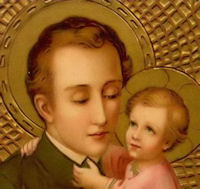 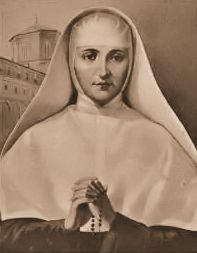 Sister Agostina died a violent death, at the hands of one of the patients in the hospital where she labored for God. When she was beatified this was noted, but it was her peaceful way of helping the poor who were sick that is most remembered. She is not a Martyr in the usual sense, because she was not killed for her Faith.She was one of ten children – the second born – in a family of moderate means and rich in the practice of the Faith, including the daily Rosary. She attended school as best as she could but had to be absent frequently in order to help her mother because her father was very ill, almost crippled with arthritis. She was learned and bright and was nicknamed "the professor". At the age of seven she had to work to help the family's income. Not only did she tend the cattle and help with her younger brothers and sisters, she made shoes, worked on olive harvests and for four years salved away helping to build a road for little pay, all with a cheerful disposition, without complaint. Livia was modest, retiring, very quiet, but popular and often asked for advice. The budding Saint was pretty and had suitors who had no hope. One of the young men, who attempted to propose to her was met with Livia's enthusiasm for Jesus. She took out a holy card with His image and said: "Here is the One I will marry."In 1866 she entered the novitiate of the Sisters of Charity of St. Joan Antida, the Rome convent. There she found that the hardest task was that all she did for Jesus was too little in her estimation; there was never anything she would refuse her Spouse. She took the name of Sister Agostina and was assigned to the Hospital of Santo Spirito, which had become far too secularized over the years. Crucifixes had been removed from the wards; one of the rules imposed on the sisters was the ban on mentioning so much as the name of God to their patients!This did not deter her because she did not need words to tell others about God; her actions were so imbued with the love of God and neighbor that her patients grasped everything she was teaching them.She had as yet to make her final profession, having come down with tuberculosis, she received Viaticum and then recovered. It was then that she requested to work with tubercular patients since she was already infected. This ward held a number of unruly men, some of them convicts. They blasphemed and sputtered vulgarities. She never failed to be patient and cheerful. Her consolation and inspiration during this time was Our Lady. She had a great devotion to the Mother of God, her favorite prayer was the Rosary. In her charming, silent way, she would write letters to the Saint Virgin and place them behind a picture by way of a mailbox. One of these contained the following: "Most Holy Lady, convert that wretched man whose obstinate heart I am not able to change and I promise to do two or three extra night duties in your honor."Sister Agostina, given the chance, chose work over rest. The night before she died, she said: "We will lie down for such a long time after death that it is worthwhile to keep standing while we are alive. Let us work now; one day we will rest."In September of 1893 Sister Agostino professed her final vows and went back to the same ward to nurse. One of the men who had been sent from a prison, a Giuseppe Romanelli, had a mother and sister who visited him. Our Saint was very kind to them. He was so troublesome in the ward that he was sent away; thereafter he wrote threatening notes. On November 13, 1894, Sister Agostino and another patient were going down the stairs of the ward, only to find themselves face to face with this four times condemned man. Romanelli wielded a knife and stabbed her several times. The patient hollered for help, but by the time it came St. Agostina was on the floor dying and saying, "Blessed Mother, help me." She was taken to a bed, no longer able to speak. Her superior asked her if she forgave the murderer, who had escaped. She nodded, Yes. She was smiling. A few moments later she had died. Two days later her funeral was held, the same day that her killer was arrested. He was sentenced for life although the Saint's family asked for mercy. He repented, received the Last Sacraments, then died in prison a year later. The process for Sister's cause begun in 1936, the first decree was in 1945 and she was beatified in 1972 and canonized in 1998.--Excerpted from Modern Saints by Ann BallPatron: Abuse victims, martyrs, people in poverty, people ridiculed for their pietyThings to Do: