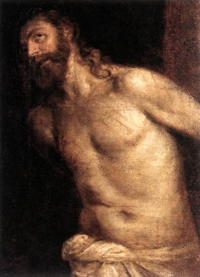 God of mercy, free your Church from sin and protect it from evil. Guide us, for we cannot be saved without you. We ask this through our Lord Jesus Christ, your Son, who lives and reigns with you and the Holy Spirit, God, for ever and ever. Amen.

The Liturgy today is concerned with Baptism. Water by itself cannot cleanse leprosy; but God can use it to do so. If God can cleanse the leprosy of the body with water there is no reason why he cannot use it to wash off leprosy of soul. The second point which the Liturgy intends to bring home to us is that God's salvation is offered and available to all men who believe in his words and obey them. — St. Andrew Bible Missal

According to the 1962 Missal of Bl. John XXIII the Extraordinary Form of the Roman Rite, today is the feast of St. John de Brefeuf. His feast in the Ordinary Form of the Roman Rite is celebrated on October 19.Stational Church
Meditation - On the Compassion of Some Women of Jerusalem
A goodly number of the women of Jerusalem (not disciples of Jesus) met this saddest of funeral processions. No doubt their weeping and sobbing and loud wailing, however sincere, was not in real accord with the sorrow that was straining Jesus' heart to the breaking point-His sorrow, namely, over their refusal to accept the truth of His Messiahship and of His supreme royalty as the promised Christ and Savior. Still, the heart of Jesus was deeply affected by the sympathy of these women. Contrasted with all else that was poured into His ears, it was very acceptable and was gratefully received.But what lastingly gives this incident its chief significance is the fact that, even here in His greatest misery, Jesus is thinking predominantly of the doom of the Holy City and its temple, now practically sealed. Evidently His heart is aching at the vision of the horrors that will soon overtake it and the whole Jewish race, for its criminal blindness to His divine credentials and its obstinate refusal to profit by His teaching and His Precious Blood. For the days are near, when the barren among the Jewish women will be called blessed; when death, sudden and terrible though it be, will seem preferable to life. Try, therefore, to look deep into Jesus' Sacred Heart in its very keen sympathy for these women, and especially for their children. For of the children here present in the procession, or carried in the arms of their mothers, many no doubt were to be witnesses and victims of the abomination of desolation coming upon Jerusalem not forty years hence (Luke 19:41-44) Excerpted from Our Way to the Father, Leo M. Krenz, S.J.Things to Do:

The Station is in the church of St. Mark, which was built in the fourth century in honor of the evangelist, by the holy Pope Mark, whose relics are kept there.

In the same year, Otto III appointed him chancellor for Italy and four years later also for Germany, a position which he held until Otto's death on 23 January 1002. Heribert was made an archbishop of Cologne on 998. Then, he also served Emperor St. Henry.

Heribert built the monastery of Deutz, on the Rhine and performed miracles, including ending a drought. He is thus invoked for rains.

He was already honored as a saint during his lifetime and was canonized by Pope St. Gregory VII about 1074.