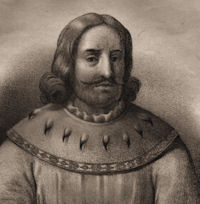 God our Savior, bring us back to you and fill our minds with your wisdom. May we be enriched by our observance of Lent. Grant this through our Lord Jesus Christ, your Son, who lives and reigns with you and the Holy Spirit, God, for ever and ever. Amen.

Lent should be seen not only as a season in preparation for the Passover of Our Lord Jesus, but also as a time and a path of grace, as we make our way, amidst temptation and struggle with sin, towards the encounter with the glory of the Risen Lord, as a river flows towards its sea. The river, not yet sea, will one day become the sea.

The Lord asks us to follow him at all times, but especially when the cross is heavy. We cannot receive everything without emptying ourselves of self: “He called the people and his disciples to him and said, 'If anyone wants to be a follower of mine, let him renounce himself and take up his cross and follow me. Anyone who wants to save his life will lose it; but anyone who loses his life for my sake, and for the sake of the gospel, will save it.” (Mk 8, 34-35). — Mgr Luciano Alimandi According to the 1962 Missal of Bl. John XXIII the Extraordinary Form of the Roman Rite, today is the feast of Sts. Perpetua and Felicitas. Their feast in the Ordinary Form of the Roman Rite is celebrated on March 7.Stational Church The Value of Fasting
Is fasting really worthwhile? Whenever I consider the value of a religious practice, I always look into the earthly life of our Savior. He is our model. He dwelt with us in order to teach us how to form our lives inwardly and outwardly. Christ Himself fasted often and accorded it high praise in His teaching. Recall how He fasted forty days before entering upon His work of teaching. At the beginning of Lent the Church wishes to stamp this fact deep in our hearts: our fasting must be in union with and in imitation of Christ's.I call to mind the mystery-laden, pregnant words spoken by our Savior when the disciples, unable to cure a possessed boy, asked, "Why could we not cast him out?," and Jesus answered, "This kind can be driven out in no way except by prayer and fasting" (Mark 9:29). This reply has always made the deepest impression on me. Prayer and fasting are extraordinary means (we may call them violent means) when other simpler ways are of no avail against the powers of hell.Now another saying of Jesus comes to mind. When John's disciples began to reproach Him, "Why do Your disciples not fast?," He replied: "Can you make the wedding guests fast as long as the bridegroom is with them? As long as they have the bridegroom with them, they cannot fast. But the days will come when the bridegroom will be taken away from them; in those days they will fast" (Luke 5:35). There is a hidden depth of meaning in these words. The coming of Christ among men was a wedding feast. Fasting had no place. But it is most proper to fast when the divine Bridegroom is taken away. Fasting on Fridays and during Holy Week, then, is in accord with Christ's own wishes.I should like to cite one further passage from the Gospel, one which casts light on fasting from another direction. Once our Savior compared Himself with the Baptist in these words, "John came neither eating nor drinking, and they say, `He has a devil!' The Son of Man came eating and drinking, and they say, `Behold a glutton and a wine drinker.'" John was a man devoted to penance, an ascetic, who fasted throughout his life. Not so Christ. His way of living was not based exclusively upon self-denial and mortification, but upon an ordered enjoyment of life. So we learn from the Savior that fasting should be the exception, not the rule, in Christian morality.To complete the lesson let us consider for a moment the passage in the Sermon on the Mount where Jesus speaks of the three important pious exercises of fasting, prayer, and almsgiving. He highly recommends all three, but warns against practicing these virtues in a pharisaical manner.The main points in Jesus' doctrine on fasting, then, are:

Excerpted from The Church's Year of Grace, Pius Parsch.

The Station today is at St. Peter in Chains. The church was one of the tituli, Rome's first parish churches, known as the Titulus Eudoxiae or the Eudoxiana. It was built over the ruins of an Imperial villa in 442 (or possibly 439), to house the chains that had bound St. Peter in prison in Jerusalem. 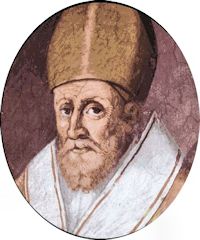 The emperors for many years were rather shadows of power than sovereigns, and, in the eighth year of the pontificate of Simplicius, Rome itself fell a prey to foreigners. Italy, by oppressions and the ravages of barbarians, was left almost a desert without inhabitants; and the imperial armies consisted chiefly of barbarians, hired under the name of auxiliaries. These soon saw that their masters were in their power. The Heruli demanded one-third of the lands of Italy, and upon refusal chose for their leader Odoacer, one of the lowest extraction, but a resolute and intrepid man, who was proclaimed king of Rome in 476. He put to death Orestes, who was regent of the empire for his son Augustulus, whom the senate had advanced to the imperial throne. Odoacer spared the life of Augustulus, appointed him a salary of six thousand pounds of gold, and permitted him to live at full liberty near Naples.Pope Simplicius was wholly taken up in comforting and relieving the afflicted, and in sowing the seeds of the Catholic faith among the barbarians.The East gave his zeal no less employment and concern. Peter Cnapheus, a violent Eutychian, was made by the heretics Patriarch of Antioch; and Peter Mengus, one of the most profligate men, that of Alexandria. Acacius, the Patriarch of Constantinople, received the sentence of St. Simplicius against Cnapheus, but supported Mongus against him and the Catholic Church, and was a notorious changeling, double-dealer, and artful hypocrite, who often made religion serve his own private ends. St. Simplicius at length discovered his artifices and redoubled his zeal to maintain the holy faith, which he saw betrayed on every side, whilst the patriarchal sees of Alexandria and Antioch were occupied by furious wolves, and there was not one Catholic king in the whole world. The emperor measured everything by his passions and human views.St. Simplicius, having sat fifteen years, eleven months, and six days, went to receive the reward of his labors in 483. He was buried in St. Peter's on the 2d of March.--Excerpted from Lives of the Saints, by Alban Butler, Benziger Bros. ed. [1894] Things to Do: