Wednesday in the Octave of Easter 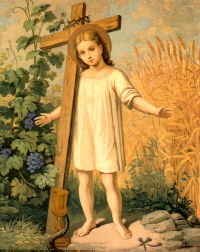 God our Father, on this solemn feast you give us the joy of recalling the rising of Christ to new life. May the joy of our annual celebration bring us to the joy of eternal life. We ask this through our Lord Jesus Christ, your Son, who lives and reigns with you and the Holy Spirit, one God, for ever and ever. Amen.

Today the Gospel relates the story of the disciples and Jesus on the road to Emmaus. Through the holy Eucharist we are drawn deeper and deeper into the saving death and glorious resurrection of the immortal Christ. Like Cleophas and Luke of Emmaus we are Table-guests of Christ, we know Him, our crucified and risen Lord, in the breaking of the Bread; our cold hearts begin to burn, our blind eyes are opened, and our souls are filled with that paschal peace and joy with which these two disciples hastened from Emmaus back to Jerusalem on that first blessed Easter evening. — Vine and Branches, Martin Hellriegel, 1948.

The Octave of Easter, throughout which formerly servile work was forbidden, was one continual feast in the Church's eyes. Each day the newly baptized attended Mass at a Stational Church, at which they recieved Holy Commmunion. In the evening they went to St. John Lateran for the office of Vespers.At Rome, the Station is in the basilica of St. Lawrence, outside the Walls. It is looked upon as the most important of the many churches built by Rome in honor of her favorite martyr, whose body lies under the high altar. The newly baptized were led here today that they might learn, from the example of so brave and generous a soldier of Christ, how courageous they should be in confessing their faith, and how faithful in living up to their baptismal vows. Meditation
St. Paul, the Apostle of the Gentiles, tells us of a mystery of the waters of Baptism. He teaches us that we were hidden beneath this water, as was Christ in his tomb; and that we then died, and were buried, together with him. It was the death of our life of sin: that we might live to God, we had to die to sin. When we think of the holy font where we were regenerated, let us call it the tomb, wherein we buried the Old Man, who was to have no resurrection. Baptism by immersion—which was the ancient mode of administering the Sacrament, and is still used in some countries—was expressive of this spiritual burial: the neophyte was made to disappear beneath the water: he was dead to his former life, as our buried Jesus was to his mortal life. But, as our Redeemer did not remain in the tomb, but rose again to a new life, so likewise, says the Apostle, they who are baptized, rise again with him when they come from the font; they bear on them the pledges of immortality and glory, and are the true and living members of that Head, who dies now no more. Here again is our Pasch, our passage from death to life. — The Liturgical Year, Abbot Gueranger O.S.B.Before the reform of the Roman Calendar this was the feast of of St. Justin, martyr whose feast is now celebrated on June 1. It was also the feast of Sts. Tiburtius, Valerian and Maximus. These holy martyrs have always been held in singular veneration in the church, as appears from various ancient sources. Valerian was espoused to St. Cecilia and converted by her to the faith; and with her he became the instrument of the conversion of his brother Tibertius. Maximus, the officer appointed to attend their execution, was brought to the faith by the example of their piety and received with them the crown of martyrdom in the year 229.


The Fruits of Our Lord's Resurrection
Yes, my dear brethren, all these things are true. Our Lord rose again in glory; He entered again into that glory that was His by nature with the Father before the world was made. Through His obedience unto death, God hath exalted Him and given Him as man that Name which is above every name, that at the Name of Jesus every knee shall bow and every tongue confess that Jesus is the Lord to the glory of the Father. And He is now ever seated at the right hand of the Father, making intercession for us.

And not merely in the highest heavens, as it were afar off. He sheds His mercies broadcast on the earth. As He forgave sins, He gave to others on earth as His ambassadors that same power. Later, by the lakeside, we see Him giving a charge to St. Peter: "Feed My lambs, be shepherd of My lambs: feed My sheep." And since then there have been many shepherds, striving as Our Lord Himself to be good shepherds and distributing His bounties. And once again by that great commission He sends forth the fruits of His Resurrection: "All power is given Me in heaven and on earth. As the Father bath sent Me, so do I send you. Going, teach, baptize . . . and I am with you till the consummation of the world." As St. Gregory comments on this passage: "As the Father hath sent Me, so send I you; that is, as the Father who is God bath sent Me who am God, so I who am Man send you who are men." In this way, whilst going before to prepare many mansions above for His faithful, He provides for us wayfarers on the earth every help and consolation and joy abundant. Thus, as the Angel predicted, all flesh shall see the salvation of God —all who will take it to themselves. Thus are we redeemed, thus reinstated; thus given supernatural life, with a right to eternal life. Now, above all things, we have ready access to the throne of the Most High. We may exclaim: "O God, awful in purity, terrible in majesty, we draw near, mindful indeed of our past coldness and neglect, of past sin; mindful of our low estate; and yet with all confidence, with the joy and freedom of children. Remember our dignity, for we are bought with a great price; remember our frailty but to extend Thy hand in succor." Today as we gather round the priest at the altar—the altar whereon the Precious Blood of Calvary continues to flow—we offer to God a worthy adoration, a worthy expression of gratitude: we are given the grace to repent and our repentance is accepted; and every other grace we ask through the merits of our Risen Saviour will assuredly be ours.S. Anselm Parker, O.S.B., M.A., excerpted from The Message of the Gospels

Wednesday in the Octave of Easter
Station at St. Lawrence Outside the Walls (San Lorenzo fuori le Mura):
At Rome, the Station is in the basilica of St. Lawrence, outside the Walls. It is looked upon as the most important of the many churches built by Rome in honor of her favorite martyr, whose body lies under the high altar. The newly baptized were led here today that they might learn, from the example of so brave and generous a soldier of Christ, how courageous they should be in confessing their faith, and how faithful in living up to their baptismal vows.