Action Alert!
CLOSING IN: 12 days left and only $25,082 away from winning a $60K Challenge Grant! We are over halfway there—please help now! 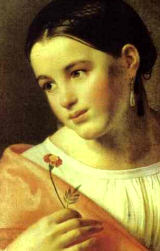 The following is an apocryphal story or legend of the Christ Child, but it is a sweet story to read to children. We have also included the traditional German sweet bread, or Stollen, recipe. So prepare the Stollen in the morning and have story-telling time at night and enjoy the Stollen.

Legend of the Little Girl and the Christmas Roses
One of the shepherds at Bethlehem who heard the angels sing, was the father of a little girl. She was with him on the hills that night. But she was asleep in the tent when the angels came down to earth where the shepherds were watching their flock. She did not hear the angel of the Lord when he said to the frightened shepherds:

"Fear not: for, behold, I bring you good tidings of great joy, which shall be to all people. For unto you is born this day in the city of David a Saviour, which is Christ the Lord."

The child stirred in her sleep when the angels sang together, and then, as in a dream, she heard these words:

"Glory to God in the highest, and on earth peace, good will toward men."

The shepherd who was the little girl's father was sure that his child was sound asleep when he set forth with the other shepherds on the way to Bethlehem. But suddenly the little girl was wide-awake. She sat up and wondered why all the earth was still and why such brightness filled the air. Softly she arose and walked into the night.

Then she saw the shepherds hastening on their way to Bethlehem. Timidly she walked a few steps away from the tent, and wondered why the very stones beneath her feet seemed alive. All the flowers that bloomed on the hillside seemed to be listening, and they bent their lovely heads toward Bethlehem. Slowly at first the child followed the shepherds. Then she ran, hoping to overtake her father, to put her little hand in his. But the shepherds hastened on their way and the little girl followed them to the manger at Bethlehem, where she saw that they worshiped the Baby born that night.

No one noticed the little girl, as at last she stood at the entrance to the stable and saw the little Lord Jesus lying on the hay in the manger. At first she looked with eyes that were round and bright in wonder. She forgot the shepherds and she forgot her father, as she too, worshiped the beautiful Baby. And oh, how she loved Him!

Then her eyes filled with tears. She longed to give Him a treasure because she loved Him. She knew that He was the King of Glory, Who had come to earth as a little baby, because He wished to make plain the way to Heaven. Oh, if only she had a gift to show the love in her heart! Her tears fell over her face and fell upon her bare feet. Let us go over to Bethlehem and see this thing that has come to pass, which the Lord has made known to us. (LUKE 3:15) Then her Guardian Angel stood beside her and said:

"Dry your eyes, little one. You have given the Christ Child your heart. You love Him, and that is enough. But because you love Him, you shall have roses for the King of Glory!"

At that, where the feet of the angel had touched the ground, roses followed his footsteps. The plants grew tall, and had no thorns. And roses blossomed, beautiful white roses for the little King.

The child filled her arms with roses, and with radiant face she walked in, carrying the lovely blossoms nodding on their stems. Straight she went to the manger and laid her flowers at the Baby's feet.

He opened His loving eyes wide, and seemed to smile upon the shepherd's little girl as she fell upon her knees before Him.

Straightway her father took her by the hand. He knew not what to think. Together they walked out into the joyous night, where white blooming roses, crowding about their path, filled the air with wondrous beauty.

From Legends of the Christ Child by Frances Margaret Fox, © Sheed & Ward, 1941.