Tuesday of the Fifth Week in Ordinary Time 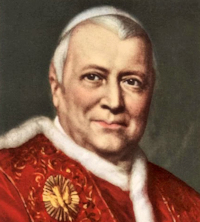 Fifth Week in Ordinary Time: Keep your family safe, O Lord, with unfailing care, that, relying solely on the hope of heavenly grace, they may be defended always by your protection. Through our Lord Jesus Christ, your Son, who lives and reigns with you in the unity of the Holy Spirit, God, for ever and ever.

O come, let us worship God and bow low before the God who made us, for he is the Lord our God.

Alleluia Verse for Tuesday of the Fifth Week in Ordinary Time, Cf. Mt 4:23:

Incline my heart, O God, to your decrees; and favor me with your law.

Let them thank the Lord for his mercy, his wonders for the children of men, for he satisfies the thirsty soul, and the hungry he fills with good things.

The Roman Martyrology commemorates Blessed Pius IX (1792-1878), who reigned as pope from 1846-1878. He was the last pope to hold temporal power for the Papal States, before they were reformed. He defined the dogma of the Immaculate Conception of the Blessed Virgin Mary on December 8, 1854 and celebrated the First Vatican Council from 1869 to 1870, which defined the dogma of papal infallibility. He was beatified by Pope St. John Paul II on September 3, 2000.

The Goodness of God means that God gives us what we need for our perfection, not what we want for our pleasure and sometimes for our destruction. As a sculptor, He sometimes applies the chisel to the marble of our imperfect selves and knocks off huge chunks of selfishness that His image may better stand revealed. Like a musician, whenever He finds the strings too loose on the violin of our personality, He tightens them even though it hurts, that we may better reveal our hidden harmonies.

As the Supreme Lover of our soul, He does care how we act and think and speak. What father does not want to be proud of his son? If the father speaks with authority now and then to his son, it is not because he is a dictator, but because he wants him to be a worthy son. Not even progressive parents, who deny discipline and restraint, are indifferent to the progress of their children. So long as there is love, there is necessarily a desire for the perfecting of the beloved.

That is precisely the way God's goodness manifests itself to us. God really loves us and, because He loves us, He is not disinterested. He no more wants you to be unhappy than your own parents want you to be unhappy. God made you not for His happiness, but for yours, and to ask God to be satisfied with most of us as we really are, is to ask that God cease to love.

Bl. Pope Pius IX was born in Senigallia, Italy, on 13 May 1792, the son of Gerolamo of the Counts Mastai Ferretti, and Caterina Solazzi, of the local nobility. He was baptized on the day of his birth with the name Giovanni Maria. Of delicate physical constitution but of very lively intelligence, his childhood was marked by little voluntary mortifications and an intense religious life.

In 1809 he moved to Rome for higher studies. A disease not well diagnosed, which some called epilepsy, forced him to interrupt his studies in 1812. He was accepted into the Pontifical Noble Guard in 1815, but because of his illness, he was immediately discharged. It was at this time that St Vincent Pallotti predicted that he would become Pope and that the Virgin of Loreto would free him eventually from the disease.

After serving briefly in the Tata Giovanni Educational Institute, he participated as a catechist in 1816 in a memorable mission in Senigallia and, immediately thereafter, decided to enter the ecclesiastical state. He was ordained a priest in 1819. Conscious of his noble rank, he committed himself to avoiding a prelatial career in order to remain only at the service of the Church. 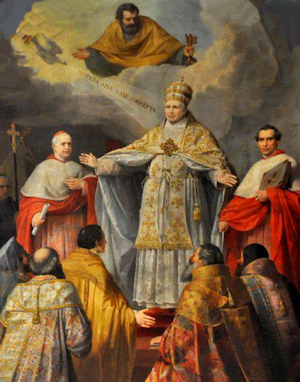 He celebrated his first Mass in the Church of St Anne of the Carpenters at the Tata Giovanni Institute, of which he was named rector, remaining there until 1823. He was immediately recognized as assiduous in prayer, in the ministry of the Word, in the celebration of the liturgy, in the confessional, and above all in his daily ministry at the service of the humblest and neediest. He admirably united the active and the contemplative life: ready for pastoral needs, but always interiorly recollected, with strong Eucharistic and Marian devotion and fidelity to daily meditation and the examination of conscience.

In 1823 he left the institute to serve the Apostolic Nuncio in Chile, Mons. Giovanni Muzi. There he remained until 1825 when he was elected President of St Michael's Hospice, a grand but complex institution in need of effective reform. To it Mastai applied himself with more than gratifying results, but without ever neglecting his priestly duties. Two years later, at the age of 35, he was consecrated Archbishop of Spoleto. In 1831 the revolution which had begun in Parma and Modena spread to Spoleto. The Archbishop did not want the shedding of blood and repaired, as much as possible, the deleterious effects of the violence. When calm was restored, he obtained a pardon for all, even for those who did not merit it.

Another turbulent see awaited Mastai in Imola, where he was transferred in 1832. He remained an eloquent preacher, prompt in charity toward everyone, zealous for the supernatural as well as the material well-being of his Diocese, devoted to his clergy and seminarians, a promoter of education for the young, sensitive to the needs of the contemplative life, devoted to the Sacred Heart and to Our Lady, benevolent towards all but firm in his principles. In 1840 he received the Cardinal's hat at the age of 48.

Despite having shunned honors, on the evening of 16 June 1846, Mastai found himself burdened with the greatest of them: he was elected Pope and took the name Pius IX.

He had a difficult pontificate, but precisely because of that he was a great Pope, certainly one of the greatest. Thoroughly aware of being the "Vicar of Christ" and responsible for the rights of God and of the Church, he was clear, simple consistent. He combined firmness and understanding, fidelity and openness.

He began with an act of generosity and Christian sensitivity: amnesty for political crimes. His first Encyclical was a programmatic vision, but anticipated the "Syllabus": in it, he condemned secret societies, freemasonry, and communism. In 1847 he promulgated a decree granting extensive freedom of the press and instituted a civil guard, the municipal and communal council, the Council of State, and the Council of Ministers. From then on his interventions as Father of all nations and temporal Prince continued unabated.

The question of Italian independence, which he sympathized with, did not set the Prince against the Pope, a fact that alienated the most intransigent liberals. The situation came to a head on 15 November when Pellegrino Rossi, the head of government, was killed and Pius IX had to take refuge in Gaeta.

After the proclamation of the Roman Republic (9 February 1849), he moved to Portici and later returned to Rome (12 April 1850). He reorganized the Council of State, established the Council for Finances, granted a new amnesty, and re-established the Catholic hierarchy in England and in Holland.

In 1853 he condemned Gallican doctrines and founded the well-known "Seminario Pio". He established the Commission on Christian Archaeology, defined the dogma of the Immaculate Conception on 8 December 1854, and blessed the rebuilt St Paul's Basilica which had been destroyed by fire in 1823.

In 1856 he approved the plan for railways in the Papal States and on 24 April 1859 inaugurated the first section between Rome and Civitavecchia. In 1857 he visited the Papal States and was welcomed everywhere with rejoicing. He sent missionaries to the North Pole, India, Burma, China, and Japan.

Meanwhile, dark clouds gathered over him with the Italian "Risorgimento", the Piedmontese annexations that were dismantling the Papal States, and the expropriation of the Legations. Suffering but undaunted, he continued to show his charity and concern for all. In 1862 he established a dicastery to deal with the concerns of Eastern-rite Catholics; in 1864 he published his Syllabus condemning modern errors; in 1867 he celebrated the 18th centenary of the martyrdom of Peter and Paul; in 1869 he received the homage of the entire world for the golden jubilee of his priestly ordination. Later that year he opened the First Vatican Ecumenical Council, the pearl of his pontificate, and closed it on 18 July 1870.

With the fall of Rome (20 September 1870) and of the temporal power, the saddened Pontiff considered himself a prisoner of the Vatican, resisting the "Laws of Guarantees", but approving the "Work of Congresses". He consecrated the Church to the Sacred Heart of Jesus, disciplined the participation of Catholics in political life with the Non expedite and restored the Catholic hierarchy of Scotland. Suffering from poor health, he gave his last address to the parish priests of Rome on 2 February 1878. On 7 February the longest pontificate in history ended with his holy death.