Wednesday of the Second Week in Ordinary Time 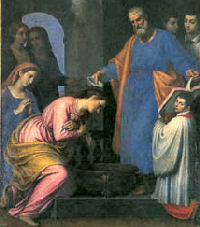 Alleluia Verse for Wednesday of the Second Week in Ordinary Time, Cf. Mt 4:23:

Jesus preached the Gospel of the Kingdom and cured every disease among the people.

The Roman Martyrology today commemorates St. Prisca, virgin and martyr (d. 275). Under Emperor Claudius II in about 270 she gained the crown of martyrdom. Prisca should not be confused with Priscilla, the wife of Aquila, mentioned in the Acts, whose feast dates to the earliest days of Christianity. 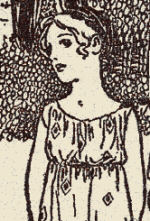 Prisca, however, did not feel the need to take precaution. The young girl openly professed her dedication to Christ, and eventually, she was reported to the emperor. Claudius had her arrested, and commanded her to make a sacrifice to Apollo, the pagan god of the sun.According to the legend, Prisca refused and was tortured for disobeying. Then, suddenly, a bright, yellow light shone about her, and she appeared to be a little star. Claudius ordered that Prisca be taken away to prison, in the hopes that she would abandon Christ. When all efforts to change her mind were unsuccessful, she was taken to an amphitheatre and thrown in with a lion.As the crowd watched, Prisca stood fearless. According to legend, the lion walked toward the barefoot girl, and then gently licked her feet. Disgusted by his thwarted efforts to dissuade Prisca, Claudius had her beheaded.Seventh-century accounts of the grave sites of Roman martyrs refer to the discovery of an epitaph of a Roman Christian named Priscilla in a large catacomb and identifies her place of interment on the Via Salaria as the Catacomb of Priscilla. —Excerpted from Ordinary People Extraordinary Lives.

Symbols and Representation: young woman with a one or more lions, an eagle and a sword